Blogging is sometimes hard. And freaking out is hard. Bad days are REALLY hard. Typing with a sort finger is a bit hard as well. I had a really rough day yesterday. It was one of those days that I was really, really glad when it was time to go to bed. I survived. It didn't kill me. I guess that makes me stronger. It definitely makes me appreciate boring days more.
The day started getting tricky when I first woke up I guess. One of those days when you wake up about an hour early but decide to stay in bed even though you know that sort of dozing for an hour will make you groggy. It happened. To me. Anyway, I got up and I started to worry about the dolls. Not generically, particularly about the dolls that were in the hands of the US postal service. They are not always reliable. And they have proven over and over they don't give a crap. At all. I also had no tracking info in my informed delivery (mail stalker) for the box (almost all of my doll inventory) that Fabian sent back to me. It was odd but not the end of the world. I asked Fabian if he had a tracking number. He gave me that and it didn't work, but also not the end of the world. Sometimes there is a delay on things. So I tried to put it out of my mind. School was kind of weird so that didn't help.
Yesterday was Tuesday so I was doing laundry. I sort of hate doing laundry, but the good news is that Travis is not complaining at all when he folds now. He is quick and just does it. It's still not super nice folding, but all things in time. Anyway, the laundromat was adding to my bad day. All of the large washers had stuff in them so I had to use a couple of the medium sized ones, which cost me more money. I had to use fewer dyers because they were either almost all in use or out of order. Using fewer meant putting more in them which then takes longer. I kept nearly dropping things (like the full basket of folded clothes) and things were just thoroughly frustrating. The tracking number was still not tracking so I was starting to freak out. I did manage to get a good amount done on the last casual English doll. 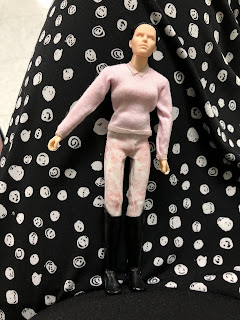 When I got home I decided I could finish the last few details on the doll. She didn't need much and it would feel good to accomplish something. Right? I should have known from the sort of wonky day at school (weird stuff about students that I can't talk about), the less than awesome day at the laundromat, plus the freaking out about my doll inventory that I should have just put the doll aside and waited to finish her another day. Hindsight is 20/20. Anyway, when I was putting my bag of doll hair and stuff away I somehow managed to stab myself in the finger. Hard. This was the kind of tiny stab wound that would not stop bleeding and actually still hurts today. This photo was after I had already wiped away the blood a couple of times. Stupid finger. I figured that it happened because of the bad day and because I was working on a pale pink doll. The lighter the doll clothes, the more likely you are to bleed, spill stuff and so on. I went and got a bandaid (that I then got paint all over) and I worked on finishing the doll. I really should have just stopped. 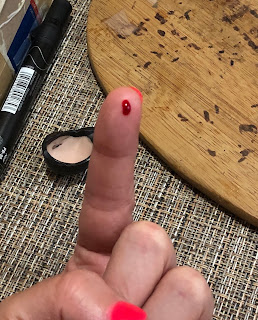 I managed to get her done without maiming myself, though it was not without a whole pile of frustration. I messed up so many things on her and had to fix or redo them. I should have put her down and waited for another day. Hindsight. But she is done. She is doll #1299. I am vaguely amazed with myself. My finger still hurts. 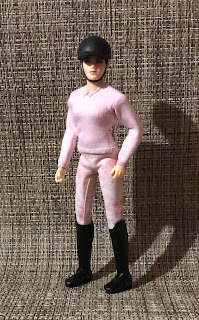 Since my freaking out about the dolls in the mail was getting worse and not better I sent Fabian another message. I asked if he could please check the tracking number again because it was still showing nothing and it wasn't in my informed delivery and I was so nervous. He said of course and sent me the number again and a screenshot of the tracking. OMG that helped so much! I put in the new number super carefully and got to my very own tracking screen! The package was still not showing in my informed delivery but I figure that is the usps trying to give me a stroke. With all the money I give them you'd think they would not be trying to kill me. This morning the package has made it to the Springfield, MA distribution center, which means it should get to Wilbraham next, which is where my deliveries are out of. I can almost breath easier about this. Ethan also has today off and I asked if he could please text me if/when the package arrives so I can totally stop freaking out. I really don't trust the postal service these days.
I need to go to the Ford dealership today so I can get my oil dyed and find out where the leak is coming from. I am going to work on some doll stuff while I am there, because I need to make a wise use of my time. I figure I will hair doll heads (though maybe I should rethink that. The hairing needle is what I stabbed myself with) and I might also work on tracing out and cutting out chaps. I could work on #1300, but he is going to be more complex and I need easy for the dealership. I could even work on random sales dolls. Because I just need to FINISH the interesting doll next for him to be #1300. So we'll see how the day goes. Already it is starting off better than yesterday.
Posted by Field of Dolls Studio at 3:24 AM

I'm sorry you had such a crappy day yesterday :( Here's to hoping today will be better *hugs

I'm sorry you stabbed yourself -- for me that's a sign of tiredness, but nothing worse. A catnap is always a good idea. I've done some great work at auto dealerships; here's wishing you luck.

I tend to stab myself either when tired or when just flat not paying attention. But exacto knife cuts are worse on me than stabs. Being older, I tend to bleed......a long time.....yuck. Love this doll. If I didn't already have 2 pink English dolls, I'd be asking to buy her.

I feel you. Threw my back out Monday evening. Putting major crimp in my "planned" activities.

(Have an eBay package to get out that isn't going to happen again today.)

Re package tracking.... Doesn't show up in emailed informed delivery until a day or so before delivery. I have tabs set up on my computer for each USPS/other package in transit. (Couldn't get package delivered yesterday out of locker due to back.)

OUCH! Sorry it was a bad day...we “suffer for our art”! Here’s hoping the prospect of special mystery doll fuels better times! Each Doll is so amazing...

Sending love and hugs hun. We all have those days where things just seem to continue to go wrong. I'm grateful for tomorrow..Lol

Gail, I was not checking the emailed tracking, was checking informed delivery on usps.com. The package never showed on there, even today, which is not usual.

Stabbing yourself is not fun. I tend to do it too. Always get myself with the needle, pesky little things. Hope you have a better day. :)
Jennifer Arsuaga