I have been very busy and very tired lately. I think some of the tired has come from the seasons changing. Some of it comes from the times I have had some really hard-core cheat days. It is really a bad idea for me to eat sugar. I have been without it for so long that when I have a sugar binge I feel like crap for days afterwards. Starving, exhausted, it's really not worth it and I should know better by now. But it's hard to resist all the time.
Anyway, yesterday we had one of the last track practices of the season. We really wanted to have it outside but it was barely 50 degrees (it's May! It needs to warm up now!) and it was starting to rain. So we moved practice inside and practiced relays in the long hallway. One by one the kids who had chosen to run dropped out to take a break. Travis kept telling me he wanted to run. And I wanted to run. And I was not too tired. So I ran, a lot. When I walk around the school in the morning sometimes I wish I could run. I get there early enough I probably could. After we ran for awhile we went to the weight room. Travis really enjoyed elliptical machines and exercise bikes. No one else was interested in them. One of the teams (not sure which one) was in there showing off with the weights. 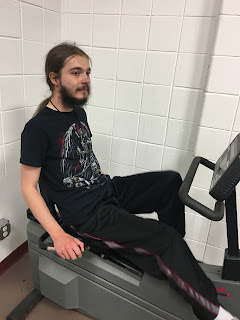 Today being Tuesday it was laundry day. I really wanted to try to get this Akhal Teke rider finished, or at least worked on. Donna wants him for Saturday if possible. I was not sure I could make it happen when she ordered it but things are looking better for that. I don't love the color of his robe, though after looking at a lot of photos I did see some that look very faded like this. And it does have the stripes. Well, I will wait and see what Donna says. 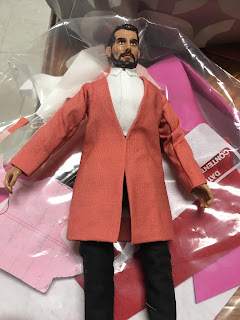 I got another very late order (this morning, lol!) for a cross country vest, pinny and some horse boots. She needs them also for Saturday. I said there was a 90% chance that they would not be done by then (which she expected). But it turns out that I ran out of things I could do to the Akhal Teke doll while the laundry still had a good amount of time in the dryer. I had brought the stuff to make the vest just in case. And it turns out I had time to get started. I still need to get Velcro in (it is more finished than this photo) and make the pinny, but I might actually be able to get it finished in time. Stranger things have happened I guess. 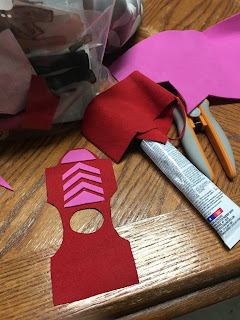 We stopped at Joann's on the way home and I got some sheer ribbon to make a belt for the Akhal Teke guy (one of the styles I saw in the reference pics looked a lot like this one) and some fur to make his hat. So he is done as long as Donna likes him. Waiting is hard! 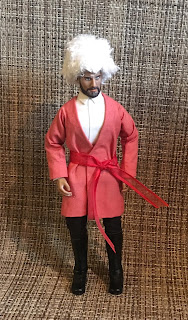 I was listening to the newest episode of Mares in Black while I was working. The theme topic was Candyland Live. Which is a show I wish I had been able to attend. One of these years I will get to some Colorado shows. At first glance the 7 class classlist for performance seems like it would not make for a fun performance day. But as Jackie and Jennifer both have said, it was a really great performance day. The class list was very loose, with just a very basic guideline for each class. And when you get to thinking about it, that is an incredibly fun way to look at performance showing! Stacylynn Mullady is hosting Medieval Madness next Saturday and she has a handful of sort of loose classes like that. I am looking forward to showing in general, but I am REALLY looking forward to the classes where I get to be (or need to be) a bit more creative. For a couple of my entries I took an idea I have already been using and added to it like crazy. Or as much as I could think of. Some of the classes I had nothing preexisting for. So I started with the basic idea and then built it up, trying to think of every possible thing I could add to it to make it a bit more interesting or funny. I think this will be great. I have shared a couple of bits and pieces already, but some things will stay secret for now. I had such an excellent time planning these entries! And like Jackie said in the podcast, it's really exciting to set them up where other people can see them. I have made so many different things for these entries I'm working on. And soon I can share them.

Posted by Field of Dolls Studio at 4:37 PM

Looking forward to all the goodies! I wish I had more time to listen to podcasts. I'm up to about half of MIB. Congrats on the running.