Yesterday I attended Medieval Madness in Stafford Springs Connecticut. It was hosted by Stacylynn Mullady and was her first show. It was a very interesting show, had a medieval theme (as you could probably imagine from the name) and has some very interesting classes in the list. The first division of the day was Costume and my first class was parade.
So Bring the Mayhem went into parade with my parade tack made by Wendy Ward. 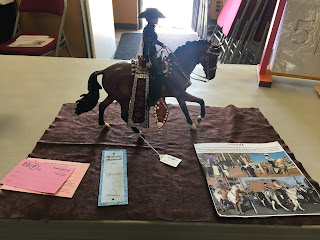 I made sure to get two photos of his first place in the class because it was very sunny (for once) and that show ring was right by the door. I kept getting blinded by the sun as I would walk by the door. A first place was definitely a nice way to start the day. 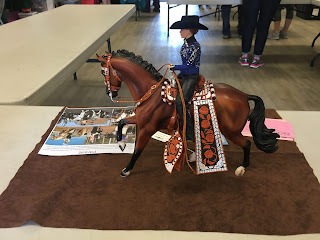 My second class was Other Costume and Sweet but Psycho, my new Copperfox pony, wore this awesome dragon costume made by Tiffany Purdy. I borrowed it from Jennifer Buxton. This is twice now that I have borrowed it. I feel like maybe I should make my own. I super love this costume! Anyway, Sweet but Psycho got second place and the judged LOVED the costume and said it made her laugh. I was mostly into the classes that were a bit different for this show. And this costume is very different. But there was crazier to come. 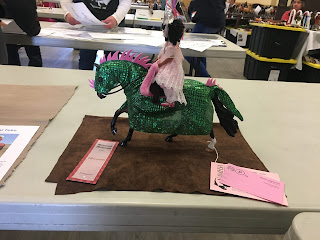 Speaking of crazy, if you didn't already know, I am a bit crazy myself. I thought I was all set for Medieval Madness, I had a show plan and was done with all the projects. Then I got a shipping update on the Breyer PC ponies I traded for and found out that they would arrive Friday, the day before the show. Well poop, that meant I needed a name for the mare and I needed to take another look at the class list and see what I wanted to try to show her in.
I figured, since I didn't already have a plan for medieval costume, and did not in fact own a medieval costume, that I would just have to make one. That happened on... Thursday I believe. The day before I even had the pony in hand. But I had seen comparison pics and knew she was close in size to Bouncer. So I made this fairly simple Medieval costume. And it's me, so there had to be a doll. I used my Travis doll and made him some "chainmail" and a... I don't know what they are called. The tunic (is it really just a tunic?) that knights would sometimes wear over their armor. I figured that was close enough. And that was good enough for second place for Lilith. And that is the name of the pony. She is super cute and fun to play with. 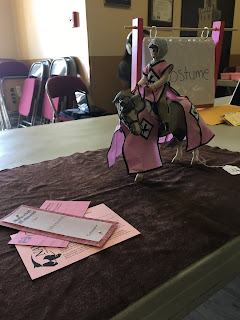 To make things fairly easy on myself and to add another class to my show plan and another class for Lilith, I made a lance and a practice target so she could go right into medieval games. 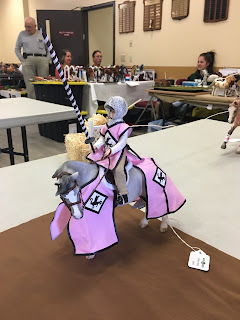 Since my lance really should have had a longer handle for proper holding and balance, it only got 3rd place. Still, not bad for a class I literally threw together 2 days before the show. 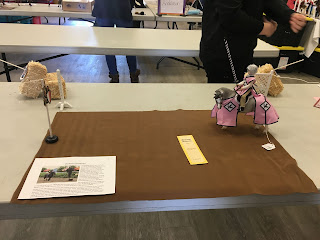 The next class was Jester, and this was honestly the class I was looking forward to most from the classlist. When I first looked at the different classes I was thinking jester, I can probably do something for that. And I started with a doll. Because it is me. It's a model horse show so there had to be a horse involved. I was having so much fun with planning this class I started thinking about all of the shenanigans that I could make happen with this. It IS a class about making people laugh after all. So some dogs got added, and as much crazy as I could think of. 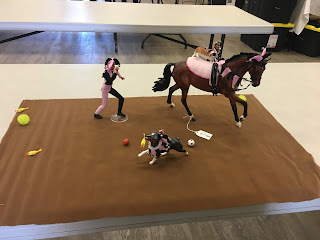 I wanted to do sort of a partial ring, so the horse would have a guide of where to run, but I could not find any super thick craft foam, which is what I wanted to make it out of. 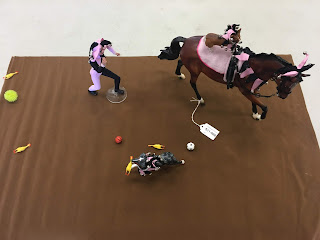 I did find and purchase rubber chickens to add to the scene (thanks for the where-to-buy tip Jackie!) and I got some sort of in scale balls to add just more crap for the animals to play with. 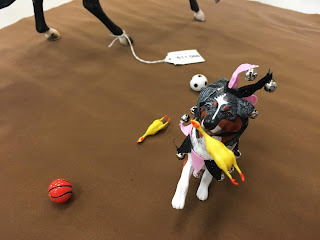 The corgi ended up riding the horse. Because, why not? 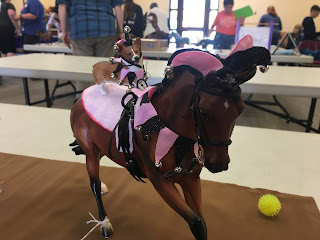 The other dog held a rubber chicken in her mouth and pranced around. 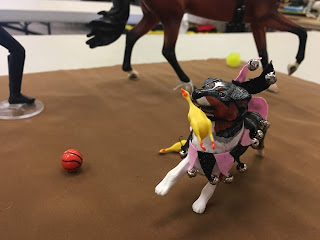 There really was just plenty of shenanigans with this entry. (oops, this photo was before I fixed the falling dog!) 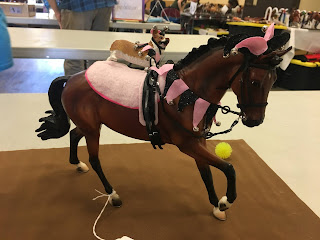 And the poor jester doll tried valiantly to catch the horse as he cantered away with the corgi. 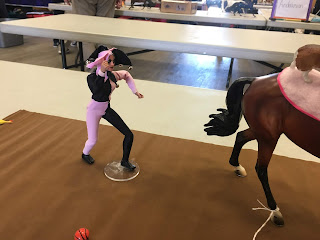 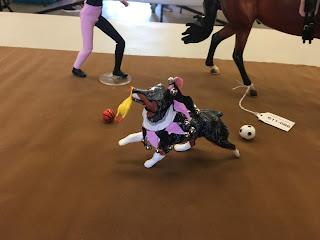 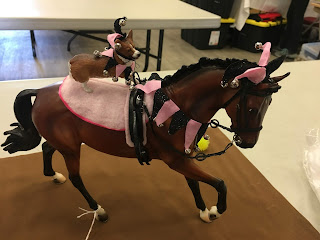 The judge loved the entry and said it really made her laugh! Which was what I was going for. I think it needs more though. I have no idea what, but I am certainly open to suggestions! 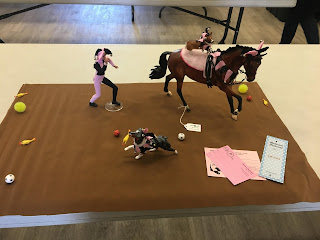 It being a Saturday, Ethan had to work of course, so Travis came with me to the show. Elecktra came and brought her movies and I set Travis up near the outlet since the little DVD player only seems to work when it's plugged in. He just chilled there for a good long while. Eventually it was Elecktra and Peter who made it so they had to leave the hall. They had been sitting at the host table but then people who were part of the show hosting team (or relatives of the hostess, not sure which) needed those seats. So Brenda very generously said they could all go hang out in the rec room. 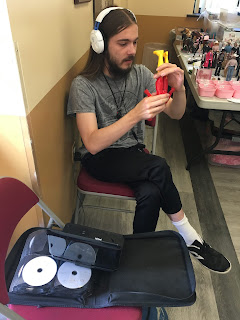 So I have finally gotten to share some of my projects that I have been working on. I had a lot of fun planning out things for this show and there will be more to come!
Posted by Field of Dolls Studio at 7:07 AM

Congratulations and what a fun show! LOVE the Jester entry...perhaps the naughty pony or corgi stole the sceptre or pipe flute or juggling balls? Glad you all had a good time!