Today's topic is the Other Performance division. This division only had 4 classes but one of them was Scene and one of them was 4 square, which was a very loosely defined class for standing models. Which made it very interesting.
My 1st scene entry was the picnic at the horse show. Lilith got to show in this one. I know I can tweek it a bit so it's even better. 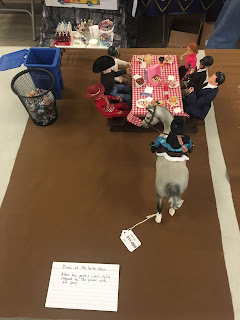 This time around I added a ton of little extra details. Like the fruit plate at the end of the table. Next time I will turn Lilith so she she looks like she is trying to eat the fruit. 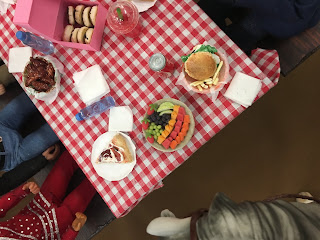 I remembered to open the box of donuts, which does have donuts in it. And I put a tiny ipod on the table. 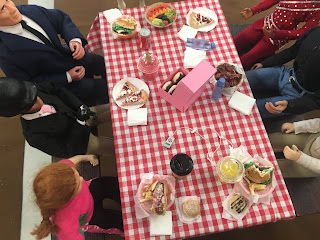 I think there might be more trash in the trash can, though I feel like I need to add more recyclables to the bin. 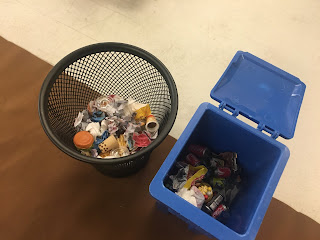 New this time around was the drinks and snacks table. 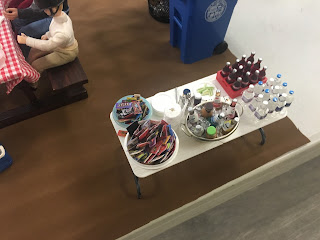 I had so much fun putting this together. Lots of waters, sodas, other drinks (on ice) chips, candy and keto snacks. Maire had a good point when she said I need those. 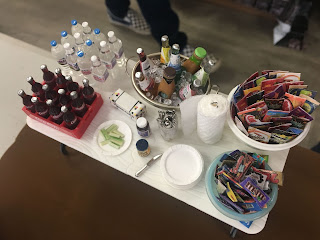 The judge also thought the pony should be aimed towards the table. But scene is a tricky class. Sometimes this one does really well and sometimes it does somewhat less well. 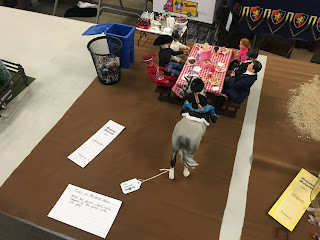 My other scene entry was the motorcycle accident. I have the bike facing in the wrong direction (oops) so maybe it spun out, hard to say. Really, I goofed. 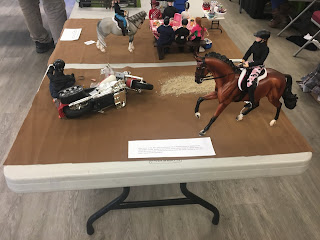 This time around the rider gets to wear a black leather jacket. The place I got it from only had brown last time. 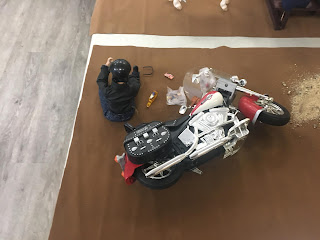 I added some little plastic bags and snacks, some riding glasses... 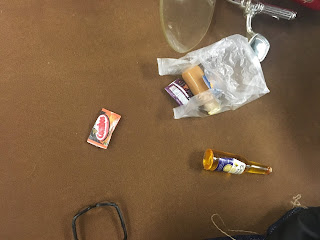 The "puddle" and the patch of sand is the same from the last time I set it up. 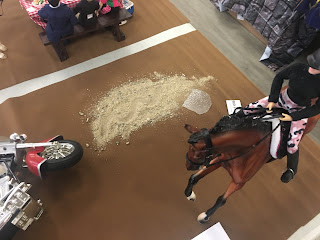 I think this guy is crying. If I dumped a Harley I would probably cry too. 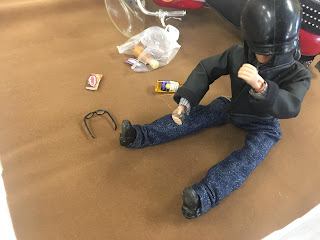 I need to figure out how to make it look like the beer is spilled. And maybe turn the "puddle" into an oil patch. Something. We'll see. 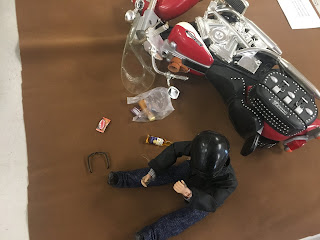 The entry ended up in 3rd place. But I thought of some new things to do to it. 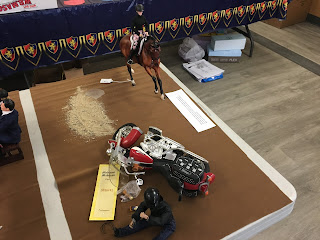 Next was natural trail and Lilith got 2nd in that. This was a mixed class, either English or western. I would have used the same doll, even if it was western. I figure, someone out for a trail ride can wear whatever they want, no matter what kind of tack they are in. 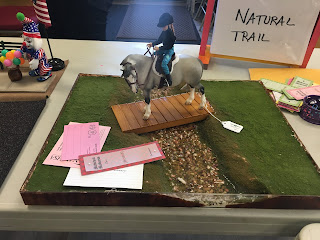 The 3rd class in the Other performance division was Other Performance. Bring the Mayhem went in with this vaulting entry. The vaulting tack was also made by Jennifer Buxton. 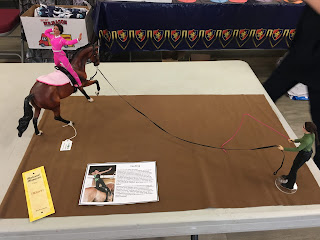 That brings us to the last class of the division; 4 square. I decided to set up a therapeutic riding scene with my Lady Phase. 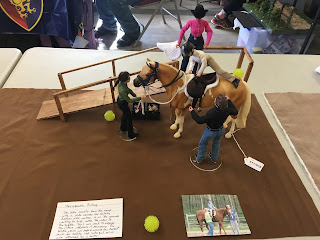 I had forgotten to make a new bit of documentation to go with this entry. So I wrote up this note card. 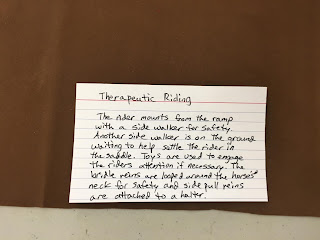 And I put down a picture of Travis in therapeutic riding when he was little. I wish I had pictures of him mounting from the ramp, but I was never in the middle of the arena for that. 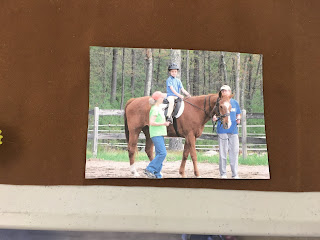 I tried to make everything in this scene accurate according to how we did things at the Pioneer Valley Therapeutic Riding Association. 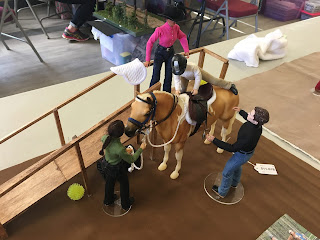 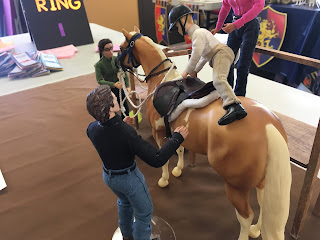 I just think this is a cute picture! 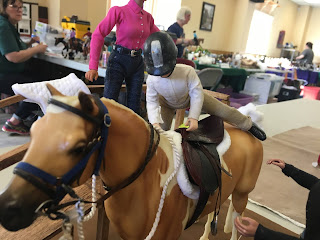 We always had crates of toys, which were usually stored under the ramp to keep them out of the way. 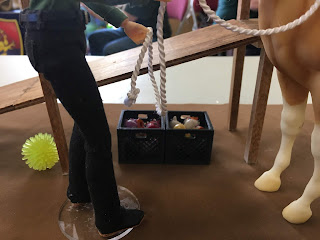 I wish I could have thought of anything else to add to this scene. But I had a lot of fun putting it together. I will likely think of something new to add before the next time I set it up. 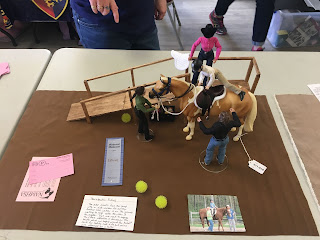 This morning we had MCAS and though I was not scheduled to proctor I ended up having to do it. The teacher I was working with was very nice, but she was correcting the entire time. So I ended up being the one that needed to watch the kids take the test. Because we literally are supposed to watch the kids test. So I ended up walking around and around the room, walking kids to the bathroom and trying to stay awake. I really hate state testing. But just one more day. I have nearly 15,000 steps and it's only 12:30. Sectionals are this afternoon so I am seeing a 20,000 step day easily. And at this rate, it's like I will go over that. Which is fine. One more day of testing tomorrow, though I may not have to proctor (it depends if anyone is out) and then back to normal. Except early release on Friday. Which means I will need to go to my very useless professional development. But for now I will focus on sectionals. If Travis scores well he will qualify for the state finals, which are next Wednesday. I hope I have some running left in me to keep him motivated during his 400m today!
Posted by Field of Dolls Studio at 9:41 AM

There is a video on YouTube where they compare dirt bikes to barrel racers. If I remember right, they race each other on the barrel pattern and then the plug race. That might be fun setup to try with the motorcycle.
- Elizabeth