Why do I do this?

I have a very important question to ask. Why do I do this to myself? I end up doing lots of show prep before every single show. Sometimes it's just working out what I want to show in each class and typing up a detailed list, and doing tack and pack. And then there are times like... this year. I have come up with a variety of new ideas. Some of them are just things to add to existing entries. I have some cool new stuff to show and I am pretty excited about it. And then there is this. 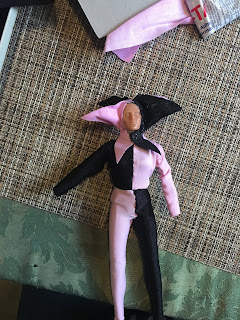 There is a class in Medieval Madness called Jester. So obviously that needs to involve a new doll. Because dolls are what I do. The horse needs to have a costume as well. This is far from all I have going into this idea, and it also does not include all the parts I made today. But really, why do I do this to myself? It would not have been hard or time consuming to make a simple jester costume for a horse and left it at that. But no, this year is all about MORE DETAILS! So eventually, this will have more details. All of it.
On a related note, I have a new pony on the way and I feel like her name should be I Have Issues. Not positive on that yet. 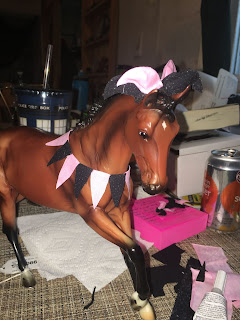 I also have been hairing doll heads this weekend. I managed to get the last one finished that I needed to do. Now I just need to print the address label and add that package to the stash of things going out tomorrow. I think I am up to 5, if the small present in the envelope gets to be counted as a package.
So now with show prep in mind I think I will go and take another look at the class list. I feel like I can tweak a couple of my entries. Tomorrow I need to go back to work but hopefully I can find some time to stop at Joann's, maybe after track practice, and get the stuff I need to finish up the jester. I knocked out a couple of small projects this weekend, and made a good dent in this one, but I have so much more stuff on my to-do list. It's never ending.
Posted by Field of Dolls Studio at 3:56 PM