Yesterday was the Western Sectional Finals for Unified Track. It was put on by Special Olympics and, as usual, was a great, well run event. Travis's first event was his individual 400m race. I think he was feeling sort of relaxed and lazy. He ran, but he ran very slowly. I could almost keep up with him (still could not actually keep up with him, just close) and no one came to help encourage him to keep going. So I had to try to catch up and do that. But he did finish and his 5th place ribbon is orange, which is his favorite color. Maybe he did it on purpose. He told me he had fun, and that is what counts. He also looks really proud of his ribbon. 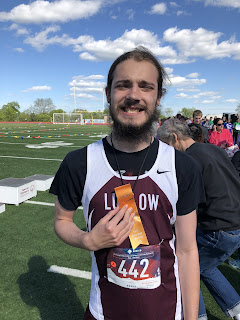 Travis's field event was the long jump. Each athlete had one running event, one field event and relays that they did. I think it was done that way to try to keep the length of the meet down. Travis seemed to be having a bit of a lazy jumping day as well, but he was definitely having a good time. 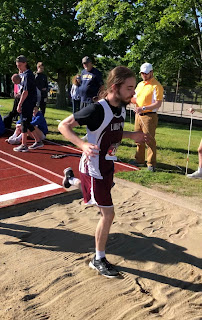 And his lazy jump got him second place and a chance to stand on the podium.

I was happy that he let us take a couple of selfies. I think Travis enjoys them too. 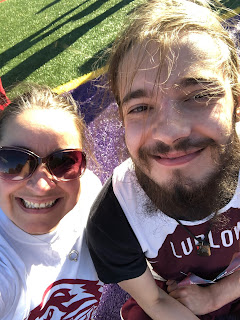 Travis's final event was a leg of the 4x400m relay. Which means that 4 athletes work as a team and each does a 400m (once all the way around the track) and then passes it to a team member. I asked one of the athletes that was not in that race if he could help me out motivating Travis like he did at the last meet. So when I got tired halfway through, Ron took over and ran (tried to run with) Travis and cheered him on. I cut across the field to catch him on the other side and encouraged him to keep going. Which he did and he passed the baton to Vicky. It was a pretty good race and the Ludlow team got 4th with the 4x400m relay. 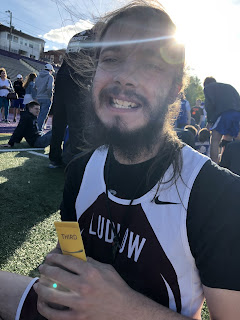 The machines that do all the calculations were down so we don't know which schools won the overall first and second place in their division. We are still waiting on that information. First and second place get medals, which is always fun. We also won't know right away who has qualified for what at States, which is next Wednesday. Hopefully we know that soon.
I have one sad but amazing story from the meet. During one of the legs of the 100m race one of our athletes was so far out in front that she was sure to get 1st. But then she fell before the finish (I missed that part, I only saw her flying down the track at the beginning and middle of the race). She did get up and kept running but the 100m is such a short race that there was no way for her to catch up and finish 1st. I don't know her actual placing. I do know that the boy from a different school, the one that came in first, went to her and gave her his blue ribbon. He said that she should have gotten it, she earned it and was so much faster than he was and should have come in first. I didn't get to witness that either but even second hand it was a bit tear inducing. What an amazing display or sportsmanship! He didn't do it for attention, he didn't do it to get the thanks and accolades that he got from many people, he did it because he truly believed that Lena deserved it and should have gotten it. Jenn, our coach, made sure to go to the officials who were giving out the awards, she told them what she saw the boy do, and made sure to get a blue ribbon for him. Helping each other, cheering for each other, even the other teams, and having fun is really what unified track is all about. I am so grateful to get to be a part of that amazing sport!
Posted by Field of Dolls Studio at 6:22 AM