There were definitely some interesting classes at Medieval Madness. I thoroughly enjoyed thinking outside the box on several things, trying new things and in the case of the vintage division, showing a horse I had not shown in awhile. Lady Liberty officially retired in 2015 after earning enough cards in showmanship for a Superior Event Horse Award and one last showing in TRXC where she also earned a top 5 in that division. She was a good horse for a very long time and a really excellent showmanship horse. The vintage classes were for any type of set-ups but with vintage horses. And the horse could be brand new with a modern paint job, the mold had to be vintage. And Lady Phase counts. So since I have very few OF models at all these days, Lady Liberty came out of retirement to play. And it was a good time. I had already put her in 4 square in the Other Performance division, but I had plans for her for most of the classes in the vintage division. Turns out though that 24 classes, most of which I was showing 2 horses in, is just too much for me. Well, 24 classes is what I ended up showing in, I had plans for more out of the 36 class classlist. Anyway, I reworked my plan for the vintage division so I could show in several things but not have to do a ton of tack changes and not have to hold up the end of the show. It turned out to be an excellent plan.
The first class for Lady Liberty was Arena Trail and Games. She was already in English tack from her therapeutic riding entry in 4 square so I decided to leave her in it and do the trail entry. I have not done a gate in awhile so it was fun to get back to it. And Lady performed extremely well. 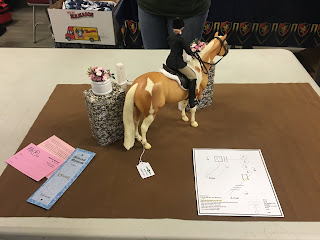 Next was English other and I decided to go with a versatility entry. I had to put down a card to tweak what my documentation says (it says they start in western and switch to English) and I decided to run up the stirrups and have the doll on the ground working to unsaddle her horse. It was a fun little difference that amused me. The judge liked it too. 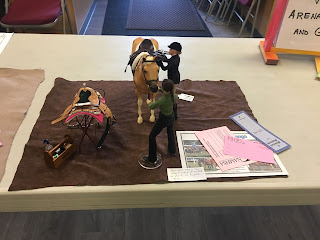 Next was other western and as part of my plan to be super speedy in finishing my entries I put Lady in Showmanship. She is also really great at showmanship. I realized after the fact that I did in fact mess up my entry. See? Even if you really know a set-up always pay close attention to what you are doing. Especially if you are tired. 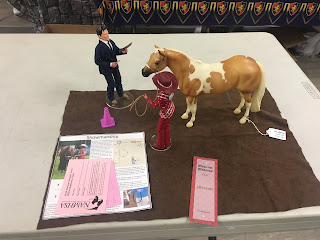 The last class in the vintage division was scene. I went with my picnic scene for a second time. I made sure all the dolls were sitting up straight and all my details were as they should be. 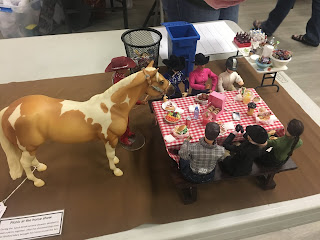 The donut box got opened, I put the iPod and an iPad on the table and whatever else I could think of to add. Because miniatures are fun. Also fun fact, this scene was originally made for Lady Liberty. And it was made for a class list where scene followed showmanship. It was a very easy transition to bring the horse and doll over from showmanship to a picnic scene that was already set up. Often in the Other Performance division (where these classes often are) a horse will only show in one class. I wanted to show in more than one but didn't want to take up a lot of time and make people wait too long. So the picnic scene was born. And it has grown over the years. 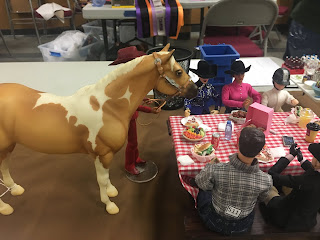 I really do love setting up this entry and I love the new snack table I put together. I need to think of something else to add. Because miniatures are awesome and why not? So as usual, I am open to suggestions. 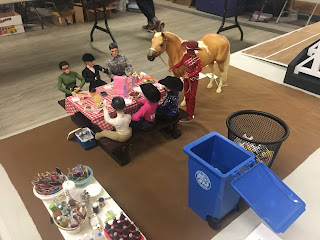 In the end the judge loved the scene and was pleased to see the dolls all sitting up properly. 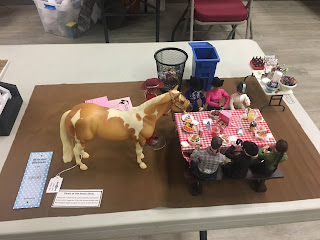 Lady Liberty didn't sweep the division but she came close. And in the end that earned her vintage performance champion. It was fun to bring her out to show again. She may or may not get to go back to her retirement. You never know. 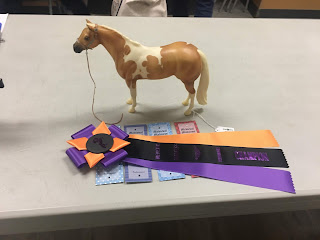 I was so exhausted by the end of the show and it ran so late, that I didn't bother to get a pic of me with the horses and awards they won. Just a pile of ribbons before I turned them back in to the show. 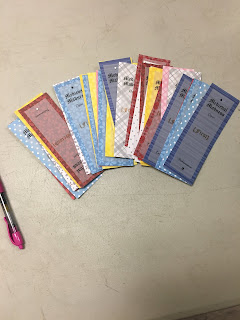 I went to get Travis from the rec room and he and I and Brenda went out to dinner. Elecktra and Peter decided they were too tired and they went home. Travis and Brenda and I had a great time with just the 3 of us. 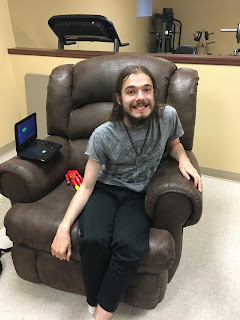 I really enjoyed my day showing at Medieval Madness and thinking about show hosting. I won't be hosting anything again any time soon, but I am working on plans for a show for the future. For the moment I will just keep trying to think of new and fun things to show at other people's shows.
I also just got some really excellent news! Several of our athletes qualified for States! Travis was one of them. So he is qualified in long jump. Maybe this weekend we will go to the track and get some extra practice in.

It was a fun, but exhausting show