Happy Mother's Day! I had a very interesting day today. First off, it's raining. Again. Or still. However you want to say it. So I had a very hard time getting motivated to do anything at all. I sort of wanted to just stay in bed and read. I'm reading a very good book after all (Career of Evil by Robert Galbraith aka J.K. Rowling). But I sort of need a new cell phone because mine is getting old and tired and not all the things work anymore. And I am out of my favorite eyeliner. Which is sad for me. So I decided to head out to the big mall because they have a Verizon store and, not one but two, Sephoras. Or so I thought.
Apparently I have not been in the mall in a long time. Or didn't need the Verizon store, not sure which. But it's not there anymore. Grr. I really sort of need a new phone. But I also want to be able to transfer over my photos and contacts without doing everything in a convoluted (or manual) way. What a first world problem. They also did not have the eye makeup remover I wanted at either of the Sephoras. So I guess I just need to order it. I could have stayed home and done that...
So while there was no Verizon store, there was a new... I can't even call it an arcade. This giant entertainment place that has a giant arcade, something like 40 claw machines, a bowling alley, pool tables, a bar, food. So yeah, big place. Very noisy, full of neon lights and people. I thought that Travis might hate it. He LOVED it! And I love skeeball, so that was fun. We played a few different games, tried a couple of the claw machines and then left to go to Sephora. But I needed a more recent photo with both my kids.  Which I made sure to take in front of an obnoxiously lit game of some kind. The more selfies I take with my kids the more I think they look a "bit" like me. 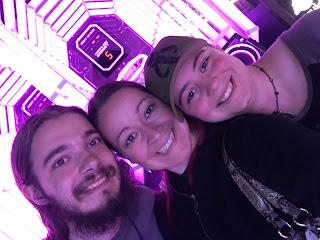 Let's jump back to yesterday for a bit. My hot mess project finally came together. I was super struggling to get the pieces of this ramp to stay together and nearly scrapped it. But I did finally make it work. One of these days I will get a photo of something without a bunch of kitchen table mess in the background. Today is not that day. 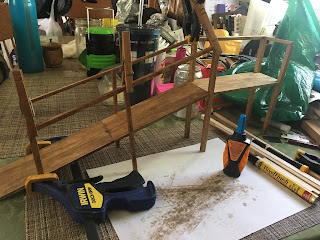 This morning Travis asked me for his usual breakfast; bread, sausage, burger and dark (black) coffee. I decided today was the right day to try out the 90 second microwave bread as French toast. It was the right thing to do. And I am sad that I waited so long to try it. 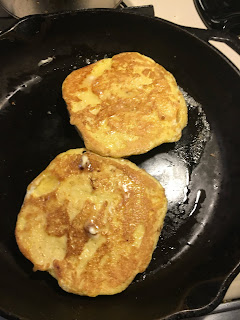 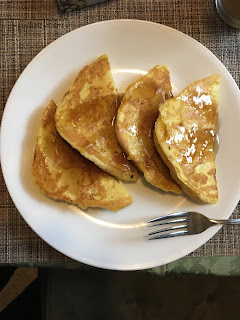 So like I mentioned, the kids and I went to the arcade and then over to visit with my parents. Travis was actually trying to engage me in conversation! That consists of him saying the name of something and waiting for me to repeat it. Or asking me what something is called if he doesn't know. But it was still cool. It's not often he cares to try for an interaction, and he was doing a really great job!
Then I dropped Elecktra off and Travis and I came home and Ethan was busy cooking supper. He managed to get the grill lit in the rain (so much rain) and made steak and asparagus with bacon. And I didn't have to lift a finger to help. This morning I also got to read a bit, I slept late and didn't do any doll work at all. It was a pretty excellent Mother's Day! 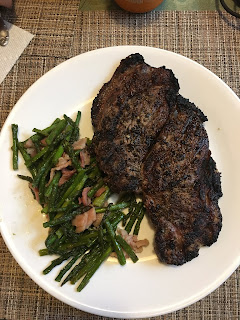 Tomorrow is back to work but there are only 5 weeks left of school. And the seniors had their last day of classes on Friday so the hallways won't be quite as crowded. Soon the end of the track season will come (3 weeks) and then the end of the school year. I will have more time to work on dolls soon. And more time to read. And apparently I need to work in some more trips to the arcade. Travis and I might be playing a ton of skeeball this summer!
Posted by Field of Dolls Studio at 4:08 PM