Making friends can be hard. You meet someone and find them interesting or fun and then you have to get past the awkward start of a conversation. In 9th grade I met one of my best friends on the second day of school in a very odd way. I happened to be wearing the exact same outfit that she had been wearing on the first day of school. Down to the same choker necklace! So she looked at me and, in a very snotty way, asked if I had been going through her closet. I didn't say anything for a few seconds because I was not sure if she was picking a fight with me or being sarcastic. I chose to go with sarcasm and answered back, in an equally snarky way, that yeah I was and what was she going to do about it? We both laughed and were basically friends from that point on. Not every start of a friendship is that easy to pinpoint, but what is universal is that a friendship has to start somewhere.
There are some really awesome kids on the Ludlow High School Unified Track team. And really, on all the teams we compete against. Over the 3 years that Travis has been on the team he has not only worked hard at his events but he has worked hard at making friends. 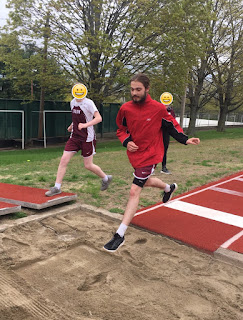 As anyone that knows a bit (or a lot) about autism knows, it can be very hard for people on the spectrum to make friends. At its core, autism is a communication disorder. People on the spectrum usually have a hard time picking up on social cues which can lead to some very awkward moments. 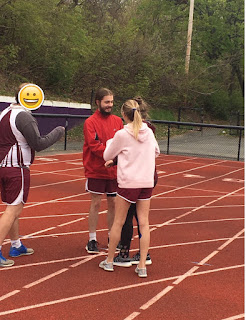 But Travis loves people and he has a great smile and shows interest in people, even without a lot of words. At yesterday's track meet Travis really connected with Vicky, who is new to the team this year. I still can't run so could not run with him in his races. Vicky volunteered to do it. For the 100m, Travis hooked arms with her and dragged her down the track! Vicky told me that Travis is so much faster than she is. But she did her best and with pushing herself to (try to) keep up with him she will also get faster. 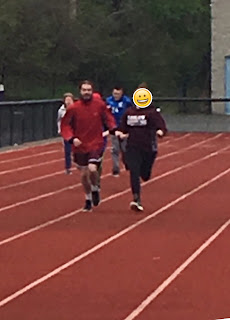 For the 400m, Vicky was also in the race. So I stood with Travis at the starting line to get him started and encourage him to run. I told him to go run with Vicky (which was her idea). Other members of the team also ran alongside the track to cheer on Travis and the rest of the team and the other team as well. Unified track is really an excellent sport to be involved in. 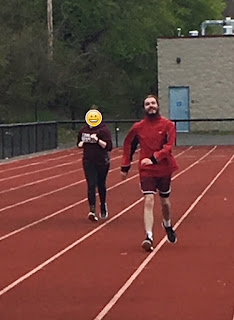 Between the events Travis spent his time hanging out with Vicky (and Lena and Marina, who are Vicky's good friends) and they talked and hung out and had a great time. 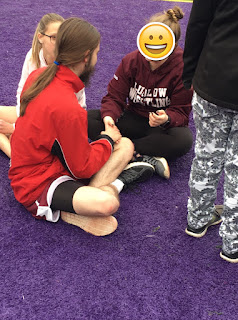 Because these other kids are not mine, I protected their identities with the smiley face stickers. But it was clear to me looking at their (real) faces, that they were having a wonderful time hanging out with Travis. It is always nice to make a new friend. And this year it seems that Travis's newest good friend is Vicky. 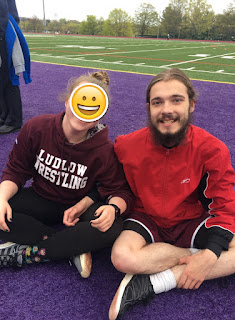 On the bus back to school after the meet, Vicky asked Travis if she could sit with him and he said no. She said that's OK, we're still friends. I told her that he probably wanted to take a nap on the way home. And school bus seats are small.
The track meet went incredibly well and Travis did some amazing things. I think his favorite part, and certainly mine, was him making a new friend. Making friends can be hard but finding great people who have a shared interest, can make it a little bit easier.

Posted by Field of Dolls Studio at 5:43 AM

For a bit there I was thinking 'what cute yellow Halloween masks.' Oh well, glad to find out why not! Congratulations to you both.