I feel like I have no time these days. Yesterday's track meet was very long. We didn't get back to the school until about 7:00. Travis did extremely well though. Especially in his 400m race. I got him started and I ran, but way behind him, and getting further all the time. A couple of times I had to yell to him to keep running, but mostly, he just kept running. I had to walk a bit at about 200m but one of Travis's teammates came down to encourage him from the sidelines. And my kid, who has always needed a runner right next to him for him to keep going at all, ran a 400m nearly independently. No one was next to him and no one was holding onto him (and he was not dragging anyone with him). I am an extremely proud mama right now. One of the officials got my time for me too (2:11) which was kind of cool. But seeing Travis doing so well in track is the best. He stays with the team and doesn't run off on his own anymore. I don't have to watch him like a hawk because he is always right where he should be. There has been so much progress.
Speaking of progress, I made some. That vest I started on Tuesday at the laundromat is done. Plus the other pieces she wanted. So that is nice and made me very happy. 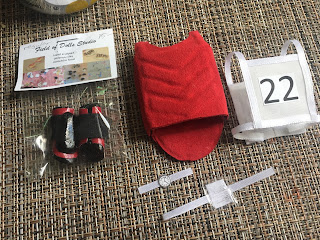 Halestorm has an awesome new halter made by Jennifer Buxton. Hopefully this will keep me from wanting to try to sell him again. But he is a good pony and really fun to show. I keep coming up with new ideas on how to show him too. Though I have a couple of people that are in line for wanting him if I ever decide to sell him. Again. 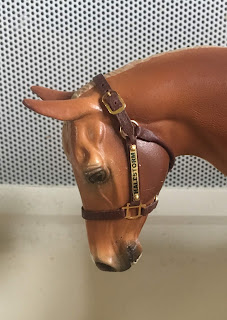 So you know how I said I feel like I have no time? Part of that could be I keep on thinking of things to make for the show on Saturday. See? I have issues. The show is 2 days away, I have everything planned out. The projects are done. The extra projects are done. But then I saw that my new pony should be here tomorrow. Crap, that means I HAVE to show her, doesn't it? And when I was deciding which classes to put her in I was looking at some other classes and thinking, well, I can show her in those. But I needed to make a costume for her. 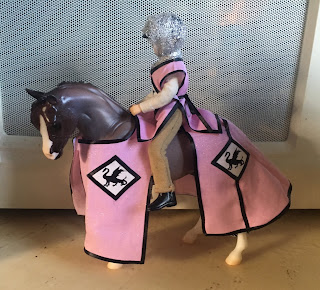 And a doll of course. But she won't be here until tomorrow. So what to do? Well, I happen to have a Bouncer hanging around and I have seen they are very close to the same size. So Bouncer got to be the model for costume fitting. It is a bit forgiving so if the pony (I don't even know the name of the Premier Club Welsh pony mare, lol!) is bigger than she looks in the comparison photos I saw, I should still be OK. How crazy is it that I kind of want to add more to this costume? I really don't have time for all this madness. I have issues for sure. 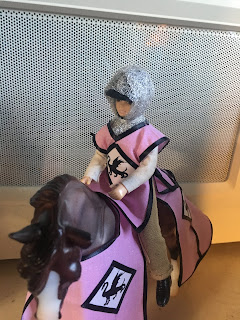 So I am basically all packed up for the show already. Car is packed too. I have an eye doctor's appointment tomorrow and those seem to take forever. But anyway, I won't have time to do my tack and pack tomorrow so I did it today. And the horses are OF so sitting in tack an extra day won't be a problem. Plus, one is naked, I can't put the parade costume on him until the show, the silver is a bit delicate and shouldn't be in a bag. I have the costume on my Copperfox pony, who got named Sweet but Psycho, did I mention that before? I feel it is an excellent pony name. So she is ready, my Lady Phase is tacked and ready and I left a space in the tote for the new pony. So tomorrow I just need to dig out some tack for her and get the new costume on her. Hopefully I don't think of any more things I need to make for the show. I really don't have time for more projects!
Posted by Field of Dolls Studio at 6:01 PM

When I showed I tacked up several days in advance. That's a good idea. And Congratulations on the running! But as for time ... triage is a perfectable art.