Breyerfest is 15 days away, but not for me. Since I can't attend myself I need to be finished and have everything shipped before that so it gets to who it needs to get to in time. Which means I have 10 days. Only 9 of those days are working days. I have set myself some pretty lofty goals for that time. After the 6th I am going to take a week off. But for now, it's all about work. A lot of it.
I started out the morning working on dressing a western pleasure doll. Some of the progress pics got posted to Instagram throughout the day. And because I learned how to link my Instagram and studio page on Facebook, the same pictures got shared there as well. Anyway, I started on the western pleasure doll but put her down to stalk the mail. I had an incredibly frustrating conversation with someone from the postal service, basically doing everything but flat out calling me a liar. I would MUCH rather have the dolls that Jackie sent me than file an insurance claim. But the way USPS works, it is likely that I don't get either of those things. The substitute carrier saw a picture of my trailer and said that was where he left my packages on Saturday. That isn't even remotely possible, since as soon as I heard the truck go by I went out to check for my very needed packages. But of course that just turns into my word against his. So basically at this point my only recourse is to file a suit against the carrier, accusing him of wrongful doing. I'm sure that would go as well as my phone call with the postal service.
So when I heard the truck go by I went down to the mailboxes so my packages could not go astray. I had some more dolls coming that Roberto sent me and I NEEDED them. Badly. So I went down to get them myself and the "very professional" carrier was on the phone through his earbuds. The entire time. When he pulled up, while he was sorting the mail into the boxes and still, when I asked him for my packages. He also asked me if the packages usually get left "here" (at the mailbox bank) and I said no, they usually get put on peoples porches, but I'll save you the trouble and take mine. I was not a happy camper, but at least there was no opportunity for that batch of dolls to be misdelivered, stolen or even thrown away. I have no idea what happened to the stuff that was not delivered to me on Saturday.
OK, I am moving on from that. So now I had a new batch of dolls and I got out the dremel for another round of batch prepping. And now I have 6 more dolls ready to work on. I should have more on the way. I really hope they come soon. 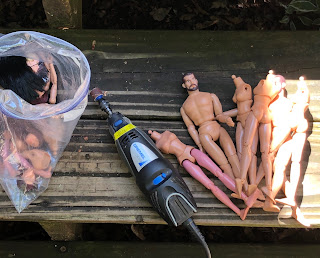 I also worked on painting some hats and a bunch of heads. Eyebrows are hard. 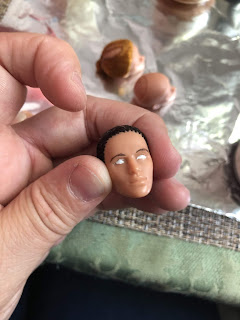 At the end of the day I got the pink and tan western pleasure doll finished and a good amount of a cowboy doll. He needs a belt, belt loops, buttons and his boot bottoms. But he is very close to done. I should be able to finish him and one or two more by tomorrow. 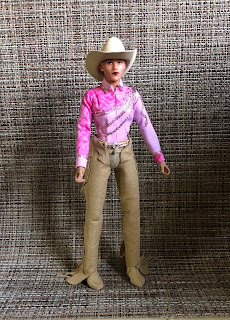 I really love how this lady came out! She was one that was not based on anything that I saw, just something I made up. And it came together nicely. I started with the idea of the off-center darker pink patterned overlay and the different colored sleeves. I was really pleased with how the two sides of the overlay lined up. It almost never works out that well. 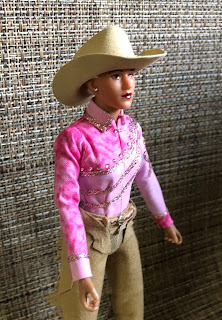 From the start I was planning on the pink ribbon between the two colors of fabric but after I got that first bit on I decided a couple more cascading layers would be nice. 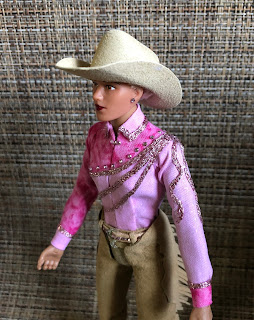 And some trailing ribbons on the sleeve seemed like a nice idea too. I can't seem to not put crystals on pleasure dolls  (I love bling!) so there is a row of crystals and a cluster on the shoulder as well. I really love this doll! 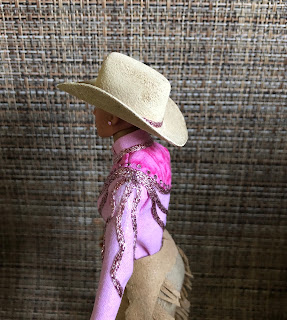 I also thought I should share my Christmas cactus. I have had this for over a year and have not managed to kill it yet. Though I was not taking care of it properly at the beginning (shocking, I know) so it had a rough time for awhile. I finally looked up how you are supposed to take care of them, applied the knowledge, and have managed to not only bring it back from near death but it is growing! It hasn't bloomed since I first got it (it was in bloom then) but it's not dead. I count that as a win. 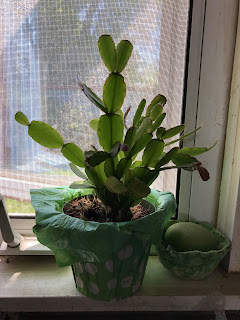 So I have been dealing with a lot of stress and frustration. I need things to arrive for me to actually be able to work on dolls and sometimes there is a delay in shipping, sometimes things go astray and I got sort of a later start than I planned because I always forget how tiring track season is. But today I said to myself (and my sister) that I need to remember the good points. Jennifer and Jackie said they would sell dolls for me at Breyerfest. That is HUGE. Roberto has known me for only a very short time and he gave me a handful of dolls. I am surrounded by really amazing people and I need to remember how lucky I am to have such wonderful people in my life. My cactus is also a reminder of that. It was a gift last year for paraprofessional appreciation day from one of the teachers I worked with. I need to remember to appreciate things. And I definitely appreciate my wonderful friends.
Posted by Field of Dolls Studio at 4:20 AM

Yes, we need to remember how fantastic friends can be.

Congrats on your cactus. Mine always seem to get straggly.