The other day (the 6th) Travis turned 19. Every one of his birthdays I teach him his new age while we are waiting for the bus (or in the morning if it happens to be on the weekend). It usually takes sort of awhile before it sticks, but this year I just needed to correct him once and he had it. I know to some people that isn't a big deal, but for me it is a sign of immense progress. It seems for quite awhile Travis was sort of stuck where he was developmentally and in the past 6 months to a year he has made leaps and bounds in so many areas. It has been amazing to watch.
Unless this is the first time you have read my blog, you probably know that here we are all doing a low carb way of eating. And I like treats. A friend of mine actually likes to say I lost a bunch of weight by eating cake. Not entirely wrong actually, lol. This cake is called "birthday cake" and is out of the Keto Cravings cookbook by The Hungry Elephant that Ethan got me for my birthday. 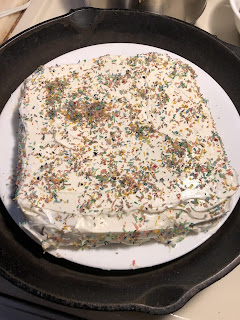 I have tried a few recipes out of this book so far and they have been very delicious and super simple to make. A lot of low carb recipes are very tricky to make, have a ton of very weird and expensive ingredients and just drain you to put them together. The Hungry Elephant recipes so far have been insanely easy to make! This cake for the instructions literally says to whisk all the ingredients together. No fancy tricks, just dump everything in a bowl and whisk it. Done. Super fast and super simple. It's also incredibly delicious. I feel that it is the closest to "real" cake I have had in low carb cake. My treat testers at school say it is a bit denser than regular cake but it is super delicious. And did I mention it's easy to make? It is. So if you are interested in the book, I posted a pic below. Mine was off of Amazon.. But I did look up the birthday cake recipe and it is on The Hungry Elephant blog and I am totally fine with sharing it. Though I do recommend buying the book. If we support people in their efforts, they will keep creating for us! 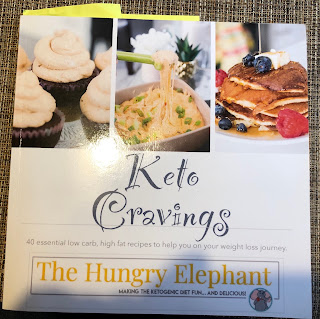 Not only was Thursday Travis's birthday, it was also the end of the year banquet for Unified track. Here is is getting his certificate for completing his third year of unified track. 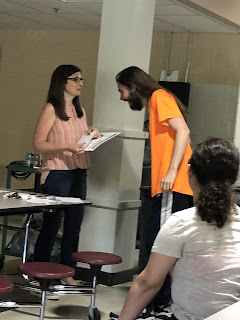 He also got a birthday card from Coach Bedore. She was one of Travis's teachers years and years ago. They have known each other for a very long time. Our Ludlow community is actually quite amazing and incredibly inclusive. 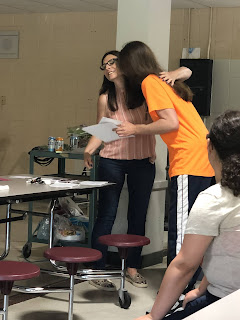 And speaking of that, all of our seniors that were on the unified track team brought their caps and gowns so they could get photos together. I had already donated Travis's but Ken, one of the amazing parents, brought his tall son's cap and gown for Travis to wear for some photos with his friends. I was so touched by that! Jill was one of my students for a couple of years and Savannah and Meaghan are my track daughters. I love all of these kids so much!


After the banquet we went home for cake and ice cream and birthday gifts. A week or two ago, Elecktra asked me what Travis wanted for his birthday. I asked him and he thought about it and said he wanted Funko Pop Izma and Kronk. It was a real answer, it was something he didn't already own and that in itself was amazing. Elecktra of course made sure to find and get them for him. He was super pleased with them. 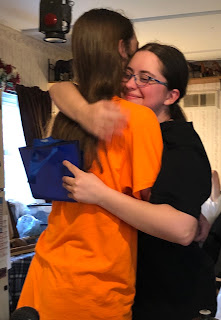 I got him a computer drawing tablet. I was and am still, looking for the best program to use this with. Travis has done a lot of drawing on the computer, just using the mouse. So I thought he would really like a computer drawing tablet. I wrote "Hi Travis" on it to show him how it worked, and he made this. I found a better program yesterday that works much better for actual drawing. This will take a bunch more experimenting before we have it all worked out. Hopefully he actually loves it. If not, I have been having fun with it, 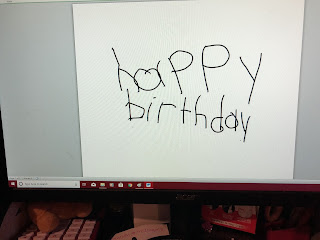 I have been a huge slacker with the blog lately. I think the last one I posted was last Sunday. And I didn't post the link to my doll page on Facebook so almost no one has seen it. I was hoping that sooner or later I would be able to stop with the links to Facebook. Maybe some day, but today is not that day.
I am really tired and sort of burnt out lately. The end of the school year is really hard, even though I have a lot less to do most of the days. I also can't think of much of anything to talk about. I am open to suggestions though.
Posted by Field of Dolls Studio at 9:01 AM