I had some trouble sleeping the other night. Not because I wasn't tired, I was, but because I have goals and I didn't feel I had gotten enough done. As much as I like the pink western pleasure doll, and as much as I got done on the cowboy, he wasn't actually done. And I only have 9 days now. And actually, it is only 8 days of work unless I do some work early in the morning on the 6th. So anyway, I had trouble sleeping and kept waking up, thinking about dolls and telling myself I could not get up at dark o'clock to work. So I got up at 6:00. I could have finished the last couple of details on the cowboy but I got started on this pair. 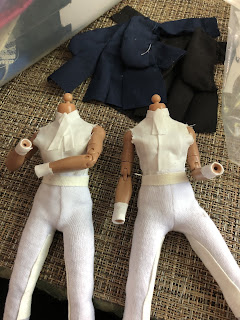 I actually really love this look with the contrasting piping. I did rip one of hunt coats I made so I will have to make a new one before the end of this adventure. At least if I want to stick to my to-do list. So far it's going pretty well.
Since I will have English dolls in both the Artisans Gallery and in room 620, I figured I should have a bunch. And I don't want them all to be exactly the same. That's boring. 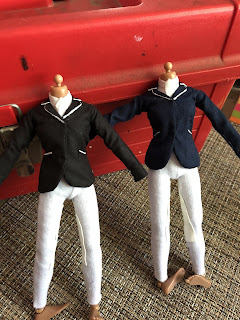 So yesterday I managed to finish the last few details on this cowboy doll (the chinks were already made), get these two English dolls together (which should be suitable for jumper classes and lower level dressage at the very least) and... 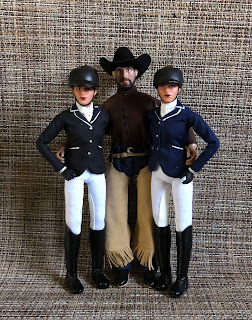 ...I got a lot done on this western pleasure doll. I basically worked ALL day, starting in the early morning and working until supper. And that is sometimes when I quit for the day, but yesterday I was feeling twitchy that I hadn't finished this western doll. So I did some more work on her. I got her boots put on (the pieces were already cut out from days ago) and I got her head haired and popped that on. The face was already painted and the hat was as well. So with those details done on her I could, and still might, call her done. But I am thinking a bit more bling. This top is closely based on a real top that looks absolutely nothing like this one. The real top is black and has charcoal details and large turquoise stones. And being a full-sized top there are more details on it. For this one I liked the look of the ribbon detailing, which also looks better on the doll in person. The large stones are in scale for what has been seen on a lot of real outfits lately. I wanted to do something in turquoise/aqua since I know it is a favorite of many people. I think this lady ended up with brown hair. We'll find out later when I add a bit more bling and get a finished photo of her. 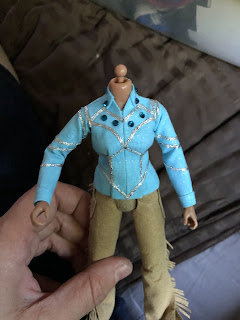 So yesterday was dolling madness day. I don't think I have ever gotten that many finished (or close to finished) in one day. I also had one already mostly done, everything prepped for several steps of the dolls, so that helped. And working an insane amount of the day. I did remember to eat, sort of. Today can't possibly have that same level of madness. I only have one lady doll body left until my big order arrives tomorrow. And I think I am going to be stressed about it until it is in my hand. I had a package that was supposed to be delivered yesterday (might have been my Rio Rondo order. Might have been something else) and they didn't bother to deliver it. But at least it isn't marked as delivered. Anyway, today I can finish one doll, and add some more bling to the turquoise western pleasure doll. After that I think I will work on chaps and cross country kits. After all, I have nothing else I can do until tomorrow when the next batch of dolls arrives.
Posted by Field of Dolls Studio at 5:16 AM

I like that phrase, "dolling madness." Gotta remember that...! keep reasonably sane here...

Lol, I'm not sure if I was ever fully sane!