The cosplayers at Comic Con were amazing! Definitely a huge part of the fun of the day. Now I kind of want to do it. Costumes are a lot of fun after all. I missed a whole bunch of people that I would have liked to get a picture of. Maybe at the next Con I will make a point of getting tons of cosplayer pictures. But here are the ones I did get. I don't know who everyone was supposed to be, Elecktra probably does (I should consult with her) but I loved every single costume because I understand the effort that goes into creating them. So regardless of whether or not they were totally accurate to the original character, I think they are all amazing.
First up was Yondu. Elecktra was super impressed and wanted a picture, but didn't want to ask. So I asked and he was awesome and posed for several. Elecktra fan-girled super hard during the whole thing. I asked her at least 5 times during the day what his name was, she told me and I forgot over and over. I forgot as I was writing this too and Googled it. 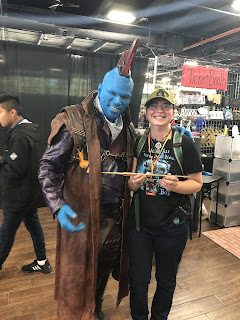 Travis got to hold a baterang and get a picture with Wonder Woman, Batman and a character I don't know the name of. He looked like he was having a good time. 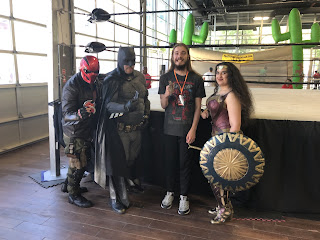 Travis also got to meet Frozone and get a picture. Frozone was very cool about the fact that Travis linked arms with him. 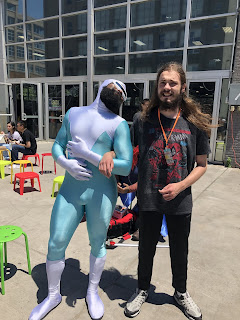 In this shot I recognize Deadpool, who I wish I had caught a picture of earlier. He (only assuming Deadpool is a he actually...) would often do the funny Deadpool poses in photos. 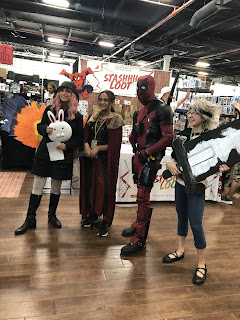 We have the Riddler posing with his tiny counterpart. 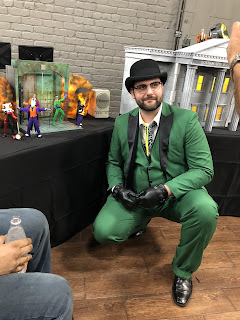 These two ladies who I don't recognize but I appreciate the effort of their costumes. And the effort of walking around in heels all day. 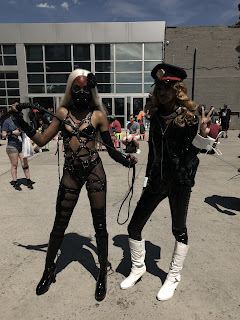 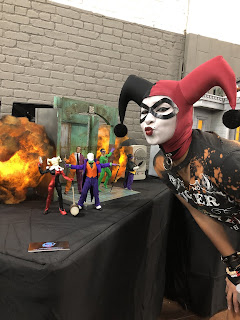 One of the best cosplayers I saw all day! He was Peter Parker when he went crazy. I missed what he was saying but Elecktra said he stayed totally in character and was ranting about how they killed his franchise. And that is true since Toby Maguire is no longer Spiderman. 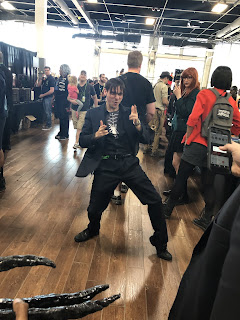 I am not sure if this lovely lady is venom, a different symbiote or what, but she was fantastic and did so much posing. I missed her really excellent poses, but didn't want to make her do it again. 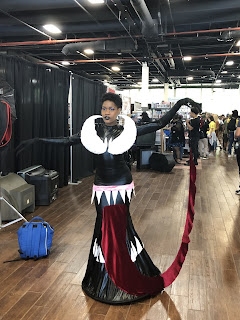 This Poison Ivy was amazing. She was facing the other way when I saw her so I said excuse me (so as not to grab her) and she said of sorry, and went to move. I said no, can I take your picture? 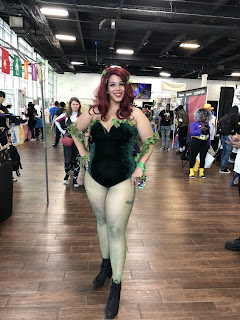 Carnage (who I am not familiar with but should be because I actually saw Venom) was the most impressive costume I saw all day. He was extremely tall, the mask breathed smoke and he was overall very cool looking. 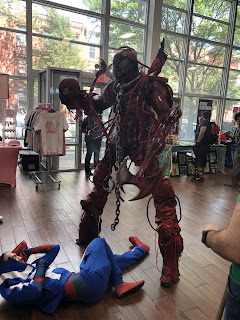 Imagine the effort it takes to create a costume like this! 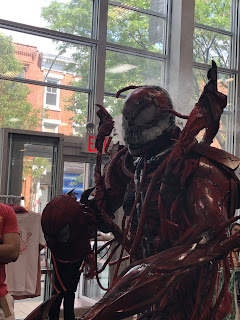 I caught him outside as well. Elecktra told me that after I turned away from taking the inside photos he walked forward and got right in the camera lenses of a couple of people in front of him. And they were a bit nervous. I am not surprised. 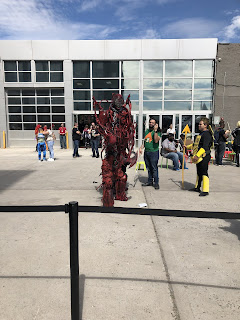 This lady was amazing and was posing for professional photos I think. Elecktra knows who she is but I forgot and don't even know what comic/movie/game she is from to look her up. (I now know this is Hela from Thor; Ragnarok. This information was supplied to me by Anne-Karin Uhlen) 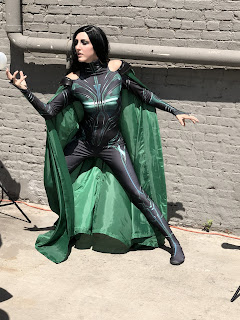 We had very old school Batman. 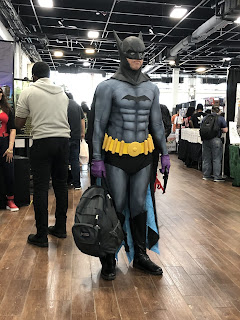 A whole bunch of different Spidermen and related characters. 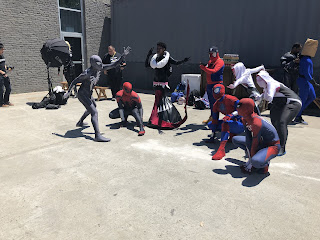 Another of Harley posing with the Batman displays. 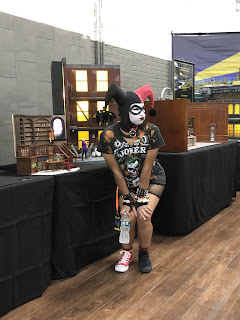 A different Harley Quinn and someone that Elecktra thinks is from X-men but I have no idea. He was with Harley so he got to be in the picture. 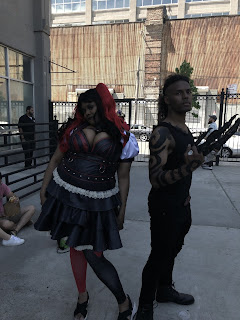 And this guy who might be from Mortal Combat or I might be completely wrong. I am sure someone can fill in the blanks for me. 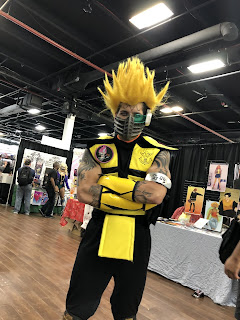 My first Comic Con experience was different than most people's I think. I went because I wanted to see the Batman Dioramas that I had a small part in creating. And I wanted to meet Roberto, who I had worked with on the project and who I share a love of miniatures with. That is what brought me in but now that I have had a bit of time to recover (that was a LOT of driving!) I think that at any con, I might just be the most into the cosplayers. So I have been looking for more. Maybe ones that are a bit closer. And I am thinking that maybe dressing up could be fun. We'll see what I can find time (and energy) for.

Hi Anne -
I think that the 2 ladies in heels are actually Fantasy creations from either Frank Frazetta or Boris Vallejo and Julie Bell, who work together to create some fantastic art for book cover, posters and calendars! Check them out ... we've had many of their calendars over the years. When you see their work, you'll know why! :-)