I have a group of cowboys headed for Breyerfest. Two of them will be the "dirty" cowboys. Guys that have been out working on the trail or on the ranch. All of them will have chaps or chinks before I am done. I don't know if I will have time to make any more cowboys, but it is a possibility. 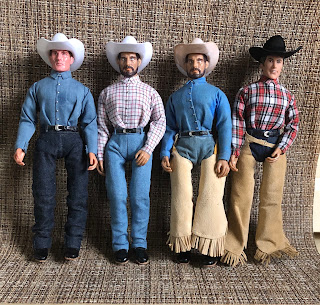 Because I just don't have enough to do at the moment, I have been thinking about how to deal with this Tony Stark head. This is an expensive head and I don't want to mess it up. But there is no obvious way to get it on the bodies I have access to. So of course I started ripping pieces off and cutting it. Makes perfect sense to me. No fear doll making. I will add a neck peg out of a different doll and then will be able to add this head to the Type S bodies that I have. And I can dress Tony Stark. That is going to be one of my first projects after Breyerfest. I need to make this guy for the trade for my for the Premier Club pony set. After all, Lilith has been here awhile and I have gotten to show and enjoy her. Time to get my end of the trade worked out. I feel like a slacker!

Yesterday morning I got this really cool photo from Anna Blackburn. She apparently has a pretty good collection of dolls that I have made. Several of them are the new, and sometimes challenging dolls, that she has ordered recently. The knight may still be one of the more challenging dolls I have made. Though Dani's hair feathers were a bit tricky. Thanks for keeping things interesting for me Anna! And thanks for letting me share your photo. 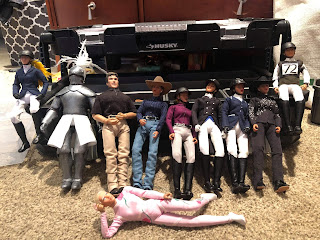 Yesterday I also happened to see my flower garden. I use that term very loosely, because I am a terrible gardener.  And really, I kill plants. So anything that grows for me has to do well on neglect. My day lilies and weeds are looking quite excellent. Though everything seems so late this year. I remember when the kids were small the day lilies would be up around Elecktra's birthday (early May) and the gladiolas would be up for Travis's birthday (early June). Now there is no sign of the gladiolas. I might get them by August. But I may not notice them until they are grown and falling over. I really am very neglectful of my garden. I think I weed maybe once a year. Or every other year. I should attack the weeds in the hostas under the pine trees. I really should make sure the strangler vines are not coming back up. Ethan and I spent an entire day last fall waging war on the vines. They were doing a pretty good job of killing the trees. We may have won the war. Hard to tell though, there are so many other weeds. 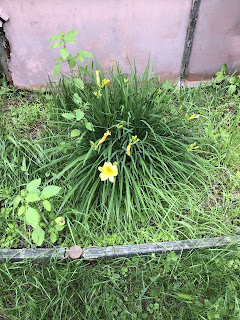 So Breyerfest stuff is progressing. I am still working incredibly long days and trying to fit in as much as I can. I am really glad that school got out as early as it did this year, or I just would not have enough time to get to everything. But I will keep on working at things, and working extremely long days, until I am out of time. Or motivation. I am hoping my motivation holds out.
Posted by Field of Dolls Studio at 4:30 AM