I get to school, most days, long before I actually have to be there. But it doesn't make sense to me to go back in the house after Travis gets on the bus. I would only have a bit of time to get involved in something and then I would have to leave. And if I got caught up in things I would be late and then my whole day would be thrown off. So I leave for school as soon as Travis is on the bus. And then I walk around the school. I am not the only one that does this, a whole bunch of kids do it too. But I am usually in nice empty hallways like this for at least a good 20 minutes. Most days I can easily hit 4,000 or 5,000 steps before the first bell rings (7:20) I get a lot of exercise inside Ludlow High School. 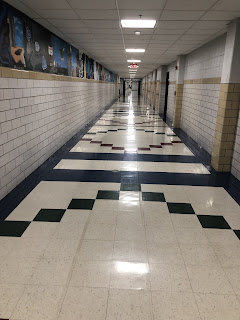 And there is a lot of art on the walls, a lot of it is even quite good. Just this morning I noticed that Maleficent was right next to The Lorax. How did I not see that yesterday? I really like this hallway. But it IS the art hallway and it should be really nice. There are paintings all over the school. I should share some more. 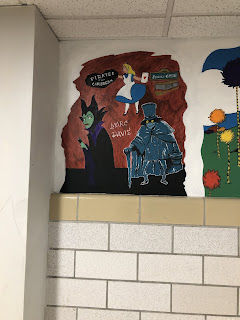 I think yesterday I mentioned the surprised lion. This mural actually takes up an entire wall but the hallways is narrow and it is tricky to get a picture of the whole pride. This one is in the B-wing hallway right outside of the office. Which makes sense because we are the Ludlow Lions. But I always thought that the male lion looked surprised. I like him a lot. 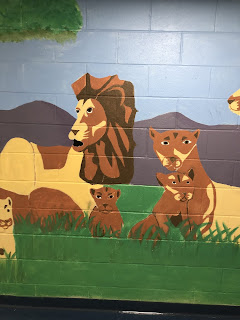 I am finally making progress on things and I am feeling accomplished and much more motivated than I have in a good long while. I managed to finish up this little youth doll right when I got home today. And I got photos of her... 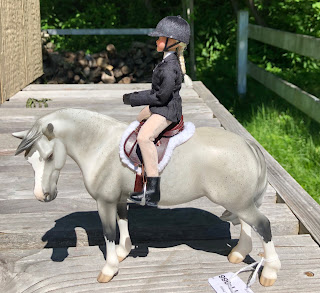 And this lady I finished a couple of days ago. Both were for orders and I am very happy to get them finished so they can be on their way home. I wanted to get started on the two dolls for another order that really needs to get done this week, but I had a very important para meeting to go to. And in the email I got it said bring your kids and grandkids if you need to. OK. 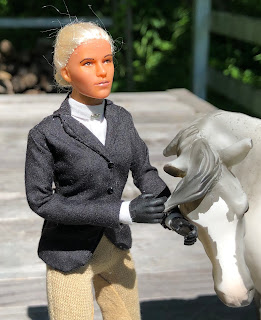 So Travis and I went to the meeting and he was really good. Then we went on the nostalgia tour. The meeting was at East Street Elementary School, which Travis attended for kindergarten and I think first and second grade. I know, I should remember how long Travis was in each school and when, but he has had an odd mix of schooling. Like, he was in Ludlow High school since he was middle school age. He has never fit neatly into any group so ended up with kids that were hopefully close to his level of learning OR age. Not always the two together. Anyway, I used to end up at East Street to pick Travis up often. Sometimes to bring him to the ER to get stitches. I think it was only once for stitches (from school, I have had to bring him to get stitched a few times) but if he was sick or they thought he was sick. The nurse at the time was amazing though and wouldn't just randomly send him home. Still, he was pretty much nonverbal back then so they had to sort of guess whether or not he seemed sick.
So the nostalgia tour. After the meeting Travis didn't want to leave the school. We heard Miss Nancy was still there (she was his preschool teacher) and we went to see if we could find her. She was in a meeting but Travis was having a good time walking around the school. He brought me to what I am pretty sure was his old classroom. He brought me to a room that was marked conference room but he said was speech (could be, he has an excellent memory). He showed me a door that he said was the "restroom" but the sign said quiet room. Maybe he meant that was the room where he would go to rest sometimes.
East Street School has art in the hallways just like the High school does. All the schools in Ludlow have art in the halls. Travis really likes the silhouetted people. There was another one that he had assigned each of the colorful people names. "Travis" was there, "Daddy", "Mommy", "Abby" (our old dog) "Gram" and "Gramps" and so on. None of them are even totally person shaped and no one has a face or anything, but I do remember he used to name them years ago.
The silhouettes of the people playing sports was also always one of his favorite hallways. He likes to point them out and say what they are doing. It didn't occur to me to take his picture until he was already almost done with one wall and was moving on to the next. He seemed to really enjoy his visit to East Street School. And we found Miss Nancy and visited for awhile. Nancy and I became friends after Travis left preschool, though we have not spent an enormous amount of time together. I said we should get together this summer and have a barbecue or something. Or go play with her horses. Or both. 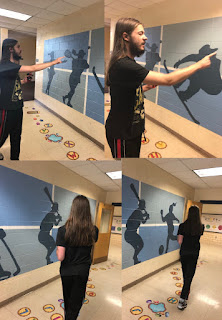 So while I had been hoping to get a little bit more doll work done today than I managed, I am not feeling crazy and behind on things like I have been. I am feeling somewhat productive and optimistic about my potential to get some things done to send to Breyerfest. And I am wondering if I should make just dolls or dolls and chaps. I don't have a ton of time left. I need to finish up an order for a couple of dolls and I have one more doll that needs to get done before Breyerfest and then I can do sales stuff every waking moment (but probably not quite that much) for a couple more weeks. Today was an interesting day. It was nice to be able to help some teacher friends at school, I went to lunch with Angelique, helped some more teacher friends, finished up a doll, saw an old friend and got to hang out with Travis. It was a really good day. And the weather was excellent.
Posted by Field of Dolls Studio at 4:51 PM

I like the surprised lions too. Thanks for the hall art! What a great place to get in the walking.
Congrats on the overall attitude - that's always important. Both dolls and chaps would be welcome, I should think.