I think pretty much everyone knows I am not a fan of the new Blogger format. I have found something else to dislike in it. I realized the other day that my miniatures catalog had half of the photos and captions cut off. How frustrating. It was because the size Blogger now loads the photos by default is too big to properly show in the post. That is incredibly frustrating. I will add it to the list of things I don't like about the new format. I did go back and fix the post about the miniatures, and I went back a few posts and fixed those, but not all of them. I don't have that kind of time. If anyone knows how to change the default settings I would love to know.

This post is not actually about how much I dislike the new format, though I dislike it a lot. I wanted to share some of the terrifying things I have done in the name of improving my performance entries. They didn't scare me, I know that everything is fixable. I have done a lot of really unusual stuff in the hobby that a lot of people would find frightening. When I learned to prep from Liesl Dalpe (who is the one who put it in my head that everything is fixable) I learned on old Eberl models. One of the first I prepped fully was a run of 15 models. Super rare, lots of sentimental value to the owner. The result is I can prep anything. I don't like prepping, but I can prep anything.

I have cut Braymere bridles. Not once, but twice. The first time was when I altered a large bridle (which I had had made for a large headed mule) to fit Bootlegger. The second time was at Medieval Madness. Lilith is super cute, and with some creativity she can be fun to show in performance. But a regular brow band doesn't fit her because of that forelock. 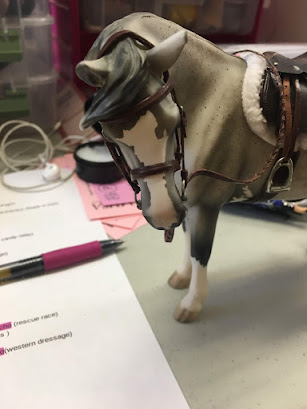 So I cut out a piece of it so I could fit it on her properly with Zots. It looks a lot better! She also started doing better in her classes. Sometimes you have to do what you have to do to make your entries work. 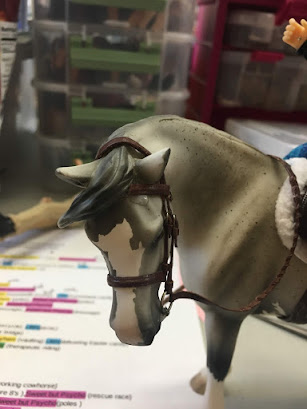 The other day when I was getting Chick ready for show photos I realized she leaned quite a bit to the left. Which made her very unbalanced as soon as I put tack and a doll on her. I didn't want her to get ruined (I have had horses fall over and break off ears) so I decided she needed a little peg in her hoof to help her stand just a little more upright. I chose the hoof that would show the peg the least, even from a very low angle, and I drilled a small hole. In a OOAK horse that I spent a lot of money on. You do what you have to do. 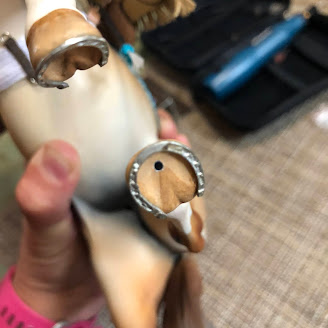 I could not find the very skinny acrylic peg I know I have around here somewhere (Tennyoo and Tennessee came with extras) so I found a bit of armature wire that fit the hole perfectly. I didn't glue it in because I am holding out hope I can get the acrylic peg that I need. The wire is so short that you can't see it when the horse is standing. Though it makes her a lot more stable. I am much less nervous setting her up for performance now. 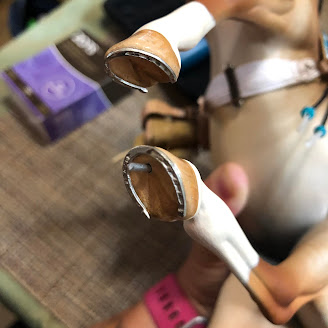 I know that adjusting expensive tack and horses is not for everyone. For the Braymere bridle adjustment, I showed it to Jennifer right after I did it. She said it looked a lot better. For Purdy Zippin Chick's adjustment, the peg was a much better option than having her fall over on the table (or fall OFF the table). There are a variety of ways to make a stand for a tippy model. The peg in a foot is the least ugly. I also want to point out that while these are alterations, they are not the type that are ruining an artists work. You can't add markings to a custom horse, unless you ask the artist. You can't change a finished piece at all really, unless you get the artist's approval. Technically, I probably shouldn't have cut the brow band on Lilith's bridle. Jennifer was fine with it but another artist might have been really upset. But if your stirrups were too long for your doll, you would adjust them. I don't think that there is anything in any laws that stop you from making a tippy horse less tippy. The model was expensive and I can't be expected to just risk her falling and getting broken. The unobtrusive peg in the foot is a much classier (and discrete) option than a little foot stand made from putty. If I had wrecked the horse I would just not have a horse to show.
Anyway, I know a lot of people would not be comfortable doing any of these things to their tack or horses. And that is OK. I was not comfortable with the idea of Chick getting broken. It didn't scare me to put the peg in her foot. If it did (which it would have before I got my tiny handheld rotary tool that has a tiny drill bit attachment) I would have asked a model horse artist who was comfortable with it to add the peg. My point is, don't be afraid to make things work for your performance entries.
Posted by Field of Dolls Studio at 11:30 PM

I like the new Blogger stats but I hate the New Post composer - especially the photo uploader - SO MUCH. I have tried and tried to make peace with it, but it is just so bad. Ugh.