Photo Showing is Awesome and Everyone Should Do It.

A bunch of years ago, I don't know how many, Erin Corbett posted on Facebook at Dark O'clock one weekend morning "model horse showing is stupid and no one should ever do it." A lot of model horse showers laughed because we get it. Live shows start at 9:00 for the most part. You are usually allowed in the hall by 8:00 to start setting up. A lot of people end up having to drive for several hours to get to the show. Live showing can be some very early days. And it is rough getting up super early, no matter how much you love what you are getting up to do.

I did a lot of photo showing for years. But I never really loved it. Since I am mostly into performance showing I needed either a great place to take photos or a way to make a poster backdrop work. I didn't really have either of those options. Over the years I did manage to get some decent to really good photo show pictures, but then all I did was send them off and wait for the results. Alone. The best part of the model horse hobby is the people, at least for me. Photo showing never really gave me the sense of community that live showing did.

These days we are not live showing (they are sometimes happening still, but we aren't going to talk about that) and I still don't really have anything great for traditional photo show photos. But photo showing has changed. All of a sudden it is our only (safe) option for showing, and the rules have changed. All of a sudden our live shows have gone online. Realistic backgrounds are no longer required for performance photos. As long as the background is not distracting, it is not going to count against the entry if it is out of scale or just a plain photography background.

And there is so much more community with this new way of showing. We can see all of the entries in the albums. A lot of time there is discussion in the groups. Bethany Shaw had her amazing live feed for door prize drawings and champ awards. It was a ton of fun. It sort of makes me want to hold a show. I don't think I have time for that. Maybe in the winter.

So Sunday I had a photo/live show for myself. I was not sure if I was going to do it or not, because you never know what the days will bring. It looked like mostly a nice day, but some rain was also expected later on. Ethan's knee has been bothering him so he was trying to think of something we could do on the house that would not be a huge project or rough on his knee. I said I was going to pull out some show stuff and play around until he thought of what he wanted to do. And then I would help and do photos after the work as well. Plus, I had new stuff to play with 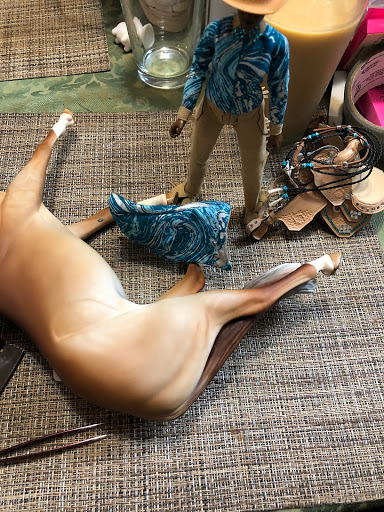 I don't have enough yard to get far enough away from the "woods" (weeds) line to make that in scale. Well, I do have enough yard, but then the trailer would be in the shot. There is no way around that. I wanted to dig out my square folding table, which I bought to do show photos, but Ethan said it would be a pain to get it out. So I took a big square board, a little camp folding table, and a piece of live show footing and set up my photo table. After all, I am taking live show photos, lol. 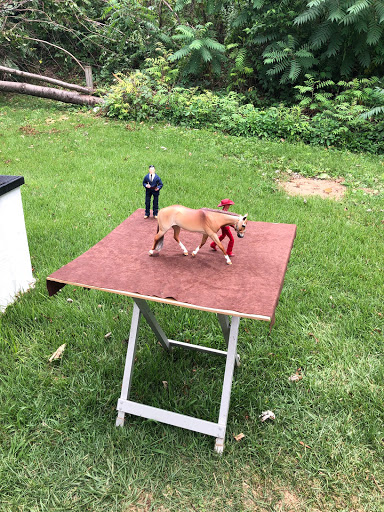 I have had Purdy Zippin Chick since before Breyerfest and have been working on getting all of her stuff that I felt I had to get together. Saturday I had just enough free time to put the doll together for the set. And I was excited to play with it. Which is fantastic. I have not lost interest in the model horse hobby, but not much has caught my eye in a long time. I have not wanted new tack or new horses, I sort of just kept showing the same things. Sometimes I would come up with something fun and different to do, but mostly I was in a showing rut. And I did pretty well in my rut, which was also not motivation to change.
This new horse, new saddle, bridle and doll have me really excited to show again. I want to come up with some different entries, which also means seeking out new documentation. I am having a really good time. 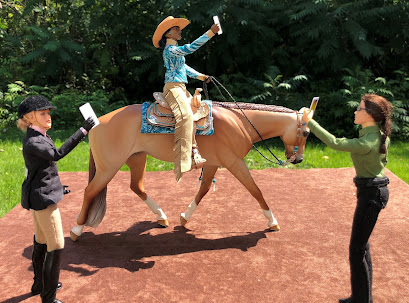 It has been such a long time since I set up a live show entry, the right way. When I took my Breyerfest photos I had the setup on my bed, I could not check the entry from every angle. And really, in photo showing, the only thing that matters is what you see with the camera. But I got a big kick out of checking my entries from all angles. I got out my measuring stick to do poles... it was a really great day. 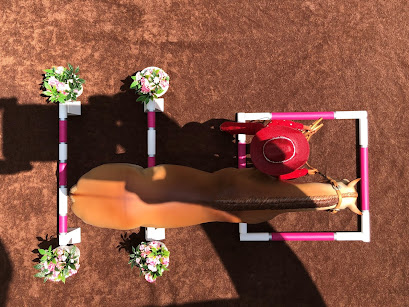 The weather forecast waffled back and forth between maybe some rain and no rain. All of a sudden the clouds rolled in and I said, out loud, I just want to get 2 more photos. I got one and was searching for props and I felt the drops. I wondered if I should risk it and I felt some more drops. Ethan, who had been outside with me for most of my photo time, asked if I wanted help getting stuff inside. I said yes please, shoved almost everything in the big tote and he brought it in with the horse and rider laying on time. I grabbed the smaller stuff and we managed to get everything in without anything getting more than just sprinkled on. I just wanted one more photo.
I did consider leaving everything out and waiting for the rain to pass. It ended up being a very short, very quick storm. But I had already decided to clean up and we had decided to head out for a drive. Travis has asked to go out in Grey Car.
While I was putting my dolls away I noticed I have a bit of diversity in my western pleasure dolls. It's funny, they all started out as the same face. The one in the middle was the later version of the Yvonne doll with the tanned skin. The one on the right was one of the original Yvonne dolls. I have had her for a very long time. The one on the left is of course my new doll, modified from a Quinn doll. Though technically, they all come from the original Yvonne mold. Anyway, it was a fun thing I noticed. 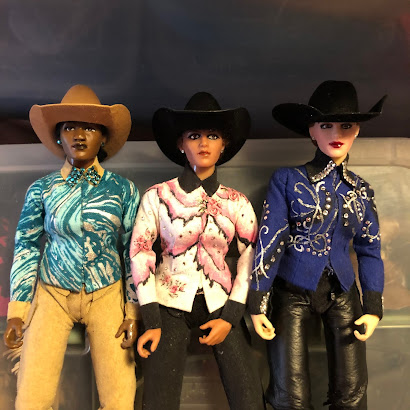 So I have a bunch of new photos of my new horse that make me really happy. I think I need to make a list of what else I would like to try with her. Then on another day, when I have some time to play, I can go out and get some more photos. She is going to be so much fun!

I love your trio of show dolls. Their colors are great. The turquoise one goes the best with Zippin Chick, but I wouldn't be surprised if the others work too.