Let's just jump right in, what was so amazing about Tuesday? I actually managed to get over 10,000 steps (way over), which is something that hasn't happened in awhile. There are days I struggle to hit 3.000 recently. So that was kind of amazing. Travis also did a Google Hangouts class with his OT (and the other kids) and it went well. They were working on kitchen safety. Travis is really good at safe and unsafe and he seemed to have a good time with it. He also did the math and this color-by-number whale without any assistance. He even had to fish through my giant box of prismacolor pencils to find what he wanted. Hey, I'm proud. 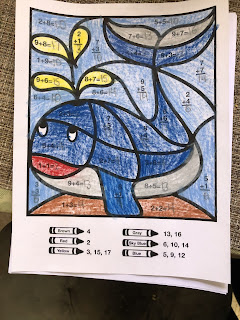 I stopped by Brandi's house to drop off some more art so we can have another paint and sip night sometime soonish. I remembered to take a picture of part of her flock of flamingos. She has them everywhere. They are fun but make getting out of her driveway (which is on a main road) a little trickier. I have not run over any flamingos yet! We had a short chat (in masks, at a safe social distance) in her driveway. It's getting to be decent weather for that sort of thing. 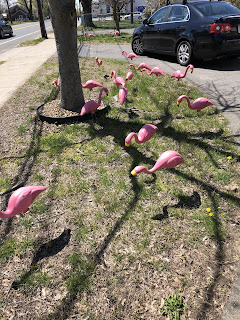 Other things that were plentiful on Tuesday were pieces of laundry. Laundry mountain is a real thing and at one point it was taller than me! I switched laundry from every Tuesday to every other Tuesday, so I could stay home more and do my part to help flatten the curve. It does make for A LOT of laundry when laundry day comes around. 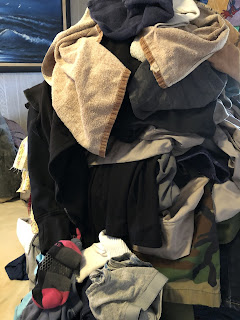 I knew that I had a lot going on Tuesday between my school stuff, Travis's school stuff and laundry, so I didn't plan in a ton of doll work. I did want to get started on a new batch of cross country vests for my Breyerfest live sale. I may change the name so Breyer doesn't get mad at me, lol. Maybe it will be my room 511 live sale. On the Facebook group Not Going To Breyerfest "Clarion" my room is 511. Anyway, I cut out 18 vests. I may add more at some point, but I think this is definitely a good start. Eventually I want to make another color wheel of vests, but for now they can be a rainbow. 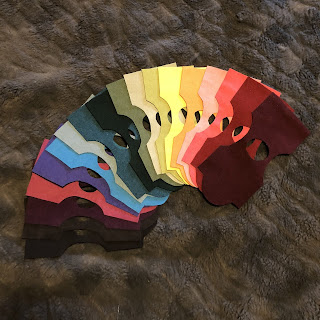 So some stuff got done, most of it not doll related, but still important. Travis and I went out for a couple of drives in between laundry in the washer, in the dryer and then to drop something on my niece's doorstep. It was a pretty good day for a drive with the sunroof open. Travis told me it was boring (I asked, lol) but he did say it was nice to get out of the house. Again, I asked. Hopefully we will start having more and more nice weather soon.
Posted by Field of Dolls Studio at 2:30 AM

My favorite is the purple.