Wednesday I was marginally motivated. I decided it was the day to finally take the breyer dolls out of the boxes and chop their necks off so I could get them ready for bendy necks. Sadly, it was also the day I read the really annoying posts that prompted yesterday's cranky post. It happens. I got a bit of work done. 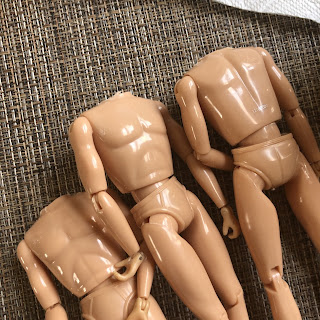 My friend Brandi sent me a picture of herself wearing one of the masks I made her to go out and do her shopping. I don't love that we need to wear masks, but I do love that we can wear such fun designs. Not all of the masks I have made are fun, but this one sure is. 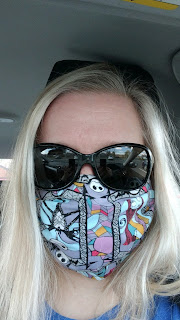 Wednesday is life skills day and we worked a lot on putting our hair in a ponytail. Wednesday is also baking day and Travis knows the rule, you tie your hair back to cook. So I demonstrated and Ethan helped him hand-over-hand and we practiced. A lot. Then I had Ethan take photos of me putting my hair in a ponytail so Travis has a visual list of the steps. We will keep practicing. 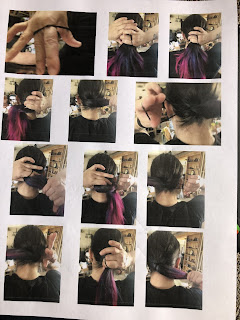 We have baked something different on each of our life skills days. This time around we made low carb banana bread. Which, before anyone gets on my case about bananas not being low carb (I know that) it doesn't actually contain any bananas. Travis took care of most of the baking with minimal assistance from me. He read the ingredient and I pulled them out and put them on the table. Travis then read the instructions and when I asked "how much" for each item he referred back to the recipe for the measurements. It was nearly magical. He did all the mixing... 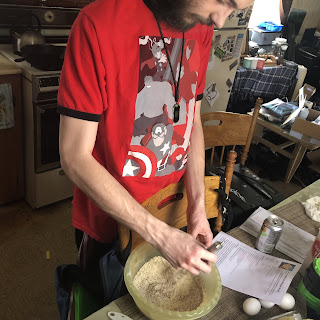 He even did the mixing of the wet ingredients with the hand mixer. He had to do that for over 5 minutes! He did an excellent job and the bread was really tasty. For anyone interested, here is the recipe. 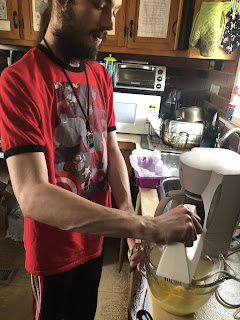 Wednesday was a good day for trying new foods. For supper I made a Green Chicken Enchilada Cauliflower Casserole my friend Nicole sent me the recipe for. She had tried it, and really liked it, and since it happened to be keto she knew we could eat it too. Ethan and I liked it but decided next time it will get black olives and some green chiles. But it was nice to switch things up a bit. 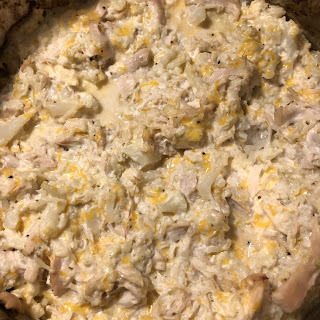 I also did some closet sorting on Wednesday. Not a ton, but some. I went through one of the boxes of tag sale stuff and took some photos and listed some stuff on Mercari. That selling app has been working fairly well for me so I might as well see how much else I can move out with it. I also managed to get the necks put on the Breyer guys and searched my fabric stash and realized that I do not have the color I need to make a particular doll. I am not going to order 2 yards of a color I will almost never need after this doll, so it looks like I have to make the fabric. At least I have the ability.
As far as dolls go, Wednesday was not overly productive, but I did get some bits and pieces done. And there really is no reason I need to push myself too hard to get all the things done, all right now. But hopefully soon I will become a bit more motivated. That would be nice.
Posted by Field of Dolls Studio at 2:30 AM

Way to go Travis! I bet that bread tasted even better for all your help!