More progress is being made on my custom horse. He is becoming more and more bay I decided to pick up some gloss for him this weekend while I was at Walmart. Mostly because I saw it and remembered that I heard gloss was more protective with pastels. So I wanted to put some layers of gloss underneath his matte. It might be protective, but I somehow managed to give him a big leg boo-boo. A chunk of black is missing from one of his legs. Not sure how that happened. It was also not something that happened with any of the matte layers. 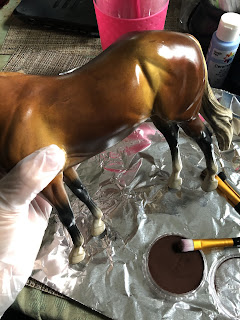 I got several more layers in on this guy but I can't seem to make him not look grainy. I have no idea where to go with that. But his color is starting to be really nice and I do really like it. I have been loosely following Stephanie Blaylock's how to paint a bay tutorial that was on the Braymere blog and I think I need to do a bit more shading and then add acrylics for a bit of the darker shading. I still think I can do this. 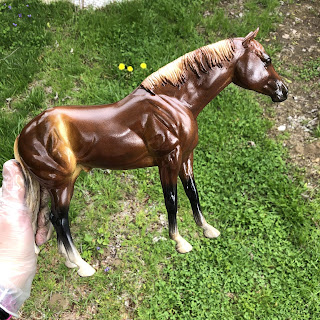 Other than the weird spot on one of his legs where a chunk of the black came off, all the way down to the base coat, I think he is coming together. His legs look black, but they don't look harsh and painted. I think I'll get a layer of matte on him and do some shading. See how it all goes. 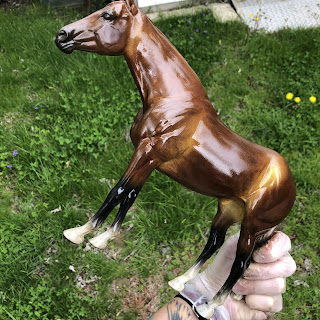 I also found the world's coolest wrapping paper at Marshall's the other day! The flamingos are all glittery! It was a pretty fantastic find and I was, for once, pleased with all the things they put out for you to impulse-buy while you are waiting in line. 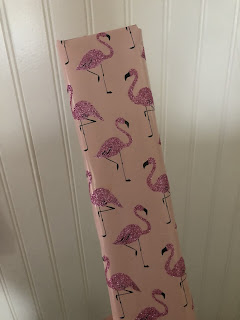 I am mostly pleased with my horse progress but I still have a long way to go and the deadline is getting closer and closer. I likely need to take a day off from doll work to do more horse work. I don't think I need tons more sessions on him, but I do need at least a few most likely. But at least he is starting to come together.

I had the exact same problem! No matter what I did, the pastels always came grainy! Do you think that it was the way the matte spray is applied? I tried pasteling it differently, light layers, dark layers, different brushes and it always came out grainy!