This WAS Easier (and still unusual)

In April of 2019 I did a series of posts about an unusual doll that was ordered by Jackie Rossi. It was a Link doll from the game Breath of the Wild. Jackie had a performance idea for Candyland live and needed the Link doll. When I wrote those blog posts I mentioned that the doll was deceptively simple but was probably actually one of the most complex dolls that I have ever made. Mostly that was because I insisted on putting in every single detail from the reference pics. But it came together well and as far as I know Jackie's Link doll is her favorite.
So roughly 2 years later Jackie came to me again and said she had another doll idea that she couldn't get out of her head. She promised it would be easier than Link. Though it was actually another Link! This time around it is Link in his Gerudo outfit. I don't play the game so I still know very little about this outfit (Jackie told me some but in case you are WAY behind on the game I won't spoil it for you). I thought it was hilarious that I needed to turn a female doll into a male doll and then dress him as a woman. That concept was actually the easy part, lol! The hard part was the material. I managed to order the custom fabric for his pants from Spoonflower. I had the designer shrink the pattern quite a lot and then I waited weeks (and more weeks) for Spoonflower to print it and ship it. But when it arrived it was perfect. And I was ready with a plan. 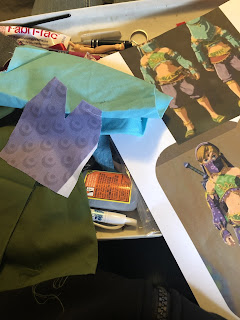 I believe the only thing that I needed to sew was the pants and then I got into the portion of the doll making that was creative gluing. I have seen doll makers over the years scoff at glue as if it was inferior to sewing. Well, this doll would look like crap if I tried to sew all these tiny pieces. I can confidently say that! 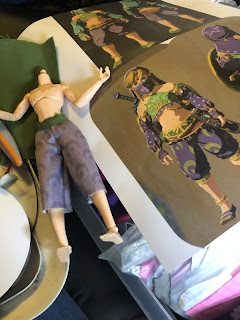 I had a basic plan for the outfit and worked out one piece at a time as I was putting things together. Even though this is still technically the ugly stage of the doll I could see I was headed in the right direction. 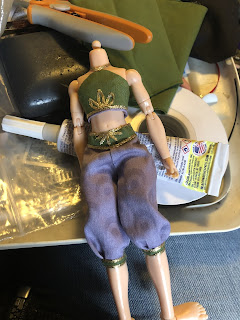 The sleeves attach to the armbands in an unusual way. It really looked like a very light, floaty fabric should have been used, but I did not have anything that would work in the right color. The other issue is light fabrics that are floaty are usually only that way in full scale. In miniature almost every fabric is stiffer. So I settled on creative design. I glued the trim on the top of the sleeves (OK, I did go and sew the tube of the sleeves) in a draped style and then cut right to the edge of them. It gives basically the same look but works in miniature. This was roughly my stopping point after the first day, though I forgot to take this photo until the second day. 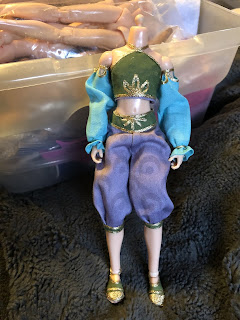 On the second day of working on Link I got into the veil and mask as well as finishing up some other details on the outfit. The top, veil, and mask all have designs on them in a color that is close to the base color but a few shades lighter. Jackie let me off the hook for putting the designs on the sleeves (oh thank you! That one would have made me crazy!) but I felt I really needed to add the others. 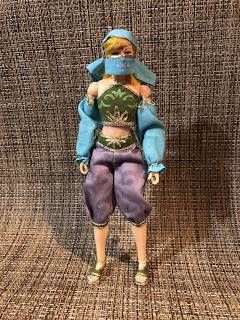 I mixed up some paint colors and followed the reference as closely as I could. It did not end up perfect, freehand painting rarely does, but things ended up fairly symmetrical. 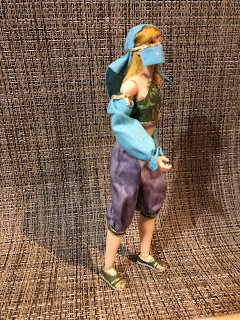 I popped the feet off and added a bit of fabritac in the joint where the foot and ankle come together. This was to help tighten up the joint so the foot doesn't flop around as much as it normally does. It helped a lot and Link can stand pretty well because of it. 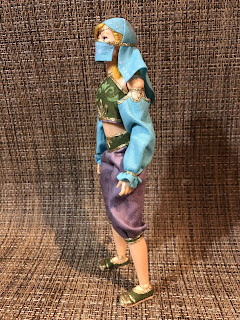 It is a challenge to get fabric to drape properly in miniature. It is a lot harder to get fabric to drape the way it does in a video game. As nice as things often look in games these days the clothing is still digital and doesn't necessarily move or drape the way it would in real life. Luckily for me Jackie said she was not looking for exact. She said people who knew the character would know who it is meant to be even if it was just close. 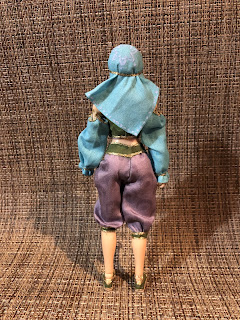 So in the end I skipped a couple of details because they would have made me crazy. Not every detail I included is totally accurate. But Link dressed a woman is recognizable as soon as you see him. And Jackie was happy with him, which is really all that matters in the end. 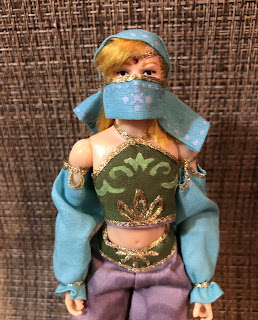 I LOVE HIM SO MUCH.

Also, can we talk about the details on his shoes? Because they are really, really fabulous.

I do love the shoes!