He's done! Back at the end of February I started customizing a Breyer Ideal Quarter Horse. Since I have never customized I horse I had no experience and only sort of an idea of what I was doing. I have been around model horse artists for a really long time, and I do pay attention, so I knew of some tricks. But I have never done the tricks. There is also a huge difference between knowing how to do a thing and actually doing a thing. Also apparently saying "I did a thing" means I am old or something. Not that I actually said that, lol.
Anyway, I took about 3 months to work on this horse. He is not complex, he is not a flashy color, and he has a lot of flaws. I know where all of them are. I have seen them, can't unsee them, and I have let them go. Today we have the big reveal of Just a Theory. Because for the last month or so he has been telling me that is what his name is. I have no idea what kind of barn name I can get out of that. Maybe he just needs to be chocolate, lol. Or cocoa. He does look pretty yummy! 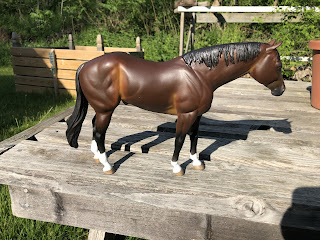 I don't have a link to a particular hoof tutorial because I read/watched a couple and then ended up mixing things. I used some acrylic paint techniques, but actually used a damp brush and Pan Pastels. And layers. Lots and lots of layers. I also see that his sock/hoof is not perfect. Again, I know where all his many many flaws are. And I still love him. 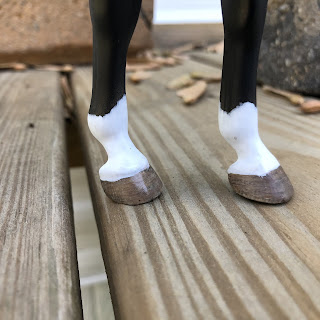 This guy has a really beefy neck and is sort of lacking in muscle tone. Because I don't know what I am doing, lol. Maybe when/if I do the next custom I need to just completely remove the neck and make a new one. Not sure how good of a job I can do of that, I have never done that, but I could give it a try. I wish I had not missed the neck sculpting workshop at Breyer Boot Camp. I meant to sign up and missed the deadline. 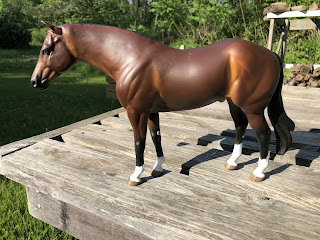 Part of why I was sort of hustling to get this guy done (3 months for a simple custom is not hustle, I know) is that I don't want to miss the deadline for the Breyerfest Best Customs Contest. That is June 11th, unless I have completely lost my mind. June 11th is also the last day for entries into Why the Chicken Crossed the Road photo show. And June 11th is the day Breyerfest Open opens for entries. Popular day. Also, I am not a last minute kind of girl. I would MUCH rather be a bit early and wait than be late. I don't like that kind of stress. I hate being late. 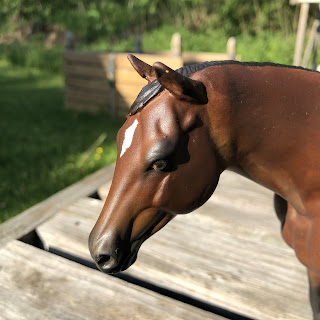 I have to say, I really like this horse. I really like most of his shading, but I really love his face. His mane is a bit scraggly, but I think it's cute. His neck is a bit bulky, but it doesn't look like a giraffe neck. He's bay, so clearly he is nearly perfect (if you haven't figured it out, I love bay horses). I definitely let some flaws slide that I could have fixed because I wanted to just keep going. I didn't want to risk running out of time. And Just a Theory is a performance horse the tack will cover some of the flaws. And the rest... well, he's a performance horse, lol! 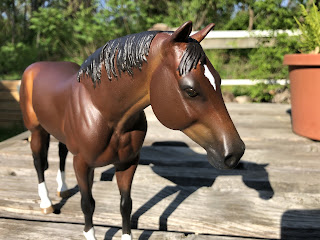 So the horse is done and I also finished up some other things for my entry. I will share those tomorrow.

Lovely work! I can't wait to see him in performance photos.

Congratulations! Love the name and can't wait to see the whole entry.

Finished is better than perfect! He looks great. I can't wait to see him in tack!

Yay you! I also have a thing for bays. IRL the color is very forgiving.

What about Theo as a barn name?

I will offer 3 barn names for your handsome Just A Theory
JT .. Jet .. Jory
I love naming animals .. working on a name for a new female Collie puppy I'm getting in 2 weeks !