The first class in the Western division was Timed Stockwork. I love how Donna's rider really looks like she is part of this scene and not just there. This is really what I love about dolls. If they are used well they can really add that element of realism to our tiny scenes.
I love how the turquoise looks on this horse!
The next class was Judged Stockwork.
Another small but solid class.
Western Games was tough to judge. It was a five entry class and They were really well done. Again, I am loving how Donna's doll really adds dimension to the entry. The horse looks speedy but the doll make it looks even speedier.

The western trail class was small but impressive. I realize that it is absolutely not necessary, or realistic, to match your doll/accessories to your trail prop. But when Joan put these poles and flowers up I said if she had a doll that was in sort of an olive green military style top with some gold on it, it would be super perfect. The doll has gold, so that's something.

This was one of the longest classes to judge. So many details to weigh out.
The western pleasure class was also gorgeous.

The last class in the western division was the Other Western class.

In the end Nancy Timm's Niangala Jack was reserve champion

And Donna Gruhn's SRF Picture Perfect was champion.
I do still have one more division of Fall Pony Final photos. I have the parts about the show written and I can add photos and updates from the end of the day. Unless there are technical difficulties that post will go up tomorrow. And then after that I will have TRXC photos to share! For now though, let me tell you about my Halloween.
I did wear my unicorn headband that Angelique gave me. It was awesome. A couple of really awesome things came from that. First was it sparked a conversation with one of the kids in the lifeskills class. He is not overwhelmingly verbal and he has never spoken to me, though I am in the class nearly every morning when he comes in. Today he looked right at me and said hello and told me his name. So I introduced myself to him. He then told me that my headband had a horn, 2 ears and flowers. I said it sure does, do you like it? He said yes and then told me the horn is a unicorn horn and unicorn starts with the letter u. I said yes it does, and unicorns are sort of like horses aren't they? He said they were and I said I knew he liked horses (he was looking up horse pictures the other day). Oh! I have a horse picture that Angelique gave me from her calendar. It has just stayed in a folder in my bag. I wonder if my friend would like to have it.
The other really fun thing that came from my unicorn headband was my friend Brandi said I could use her very special unicorn pen to take notes. Taking AP Calc notes in pen is terrifying. But Brandi let me use her pen and it amused both of us. 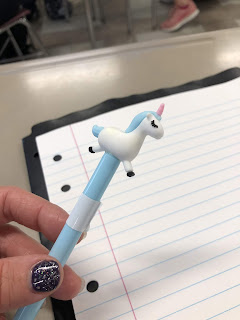 Yesterday was a pretty decent day at school. I don't remember anything annoying, so yeah, good day. When I got home I had several painting projects I needed to do. I needed to do my nails (if I keep polish on them I won't bite them) and I needed to finish painting Tiny Abby. 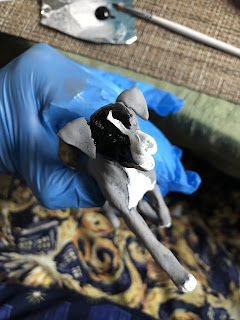 So I worked on both at the same time. I would do a layer of whites and then do one hand's worth of nails. The first time around (my first time doing gels myself) they didn't cure properly. So I put on the remover and a glove and I worked more on Abby. I messed up a few things here and there, but it was not too bad.
I got her all finished up and made her a blue collar. Now she is a proper tiny Abby. Even before the collar I brought her to Travis and asked who it was. He said (quickly) "horse, dog, Abby" I don't think he actually bothered to look right away. But he recognized her as Abby. That's good enough for me. I showed Ethan after he was home and after I got her collar on. He said she looks so young. Tiny Abby will be young forever. And I am really glad I have her. Who would have thought that I could miss that dog so much. She and I used to butt heads often. She was stubborn and sort of stupid at times. But she was sweet and she was fun. She was a good dog. I still miss her. 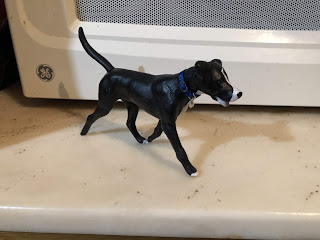 So I got my Tiny Abby finished, which was a very important project, and I got a pair of chaps mostly done. I traced out two more pairs and hopefully I can finish them up tomorrow. We'll see. I also tagged ad cataloged all of the dolls and I have 27 sales dolls for TRXC! I'm kind of impressed with myself. I have a good variety of other things available as well.
To wrap up, I painted my nails, painted my dog model, worked on some chaps and I tacked up another horse. So I need to tack 3 horses later today. Two of them need boots. But I can start right after school and get them packed and in the car and get all the props and things in the car that don't already live in the car. I'm almost ready. Tomorrow is TRXC.
Posted by Field of Dolls Studio at 3:00 AM

Have fun at TRXC! Will miss you and all the fun. I find your Blog through Facebook and read it every day.

Keep up the Blog. I also read it everyday, normally at work. SHHH, don't tell my boss.

I'm so excited and thrilled that my entries are shown on your Blog, especially since I didn't get too many pics myself.

Nice pix, great commentary! I'm impressed at your interactions with the various showers; that doesn't happen at every show. Good luck for tomorrow.

Please don't stop the Blog, I don't always leave a message but I love reading them. ❤❤❤❤

Don't worry everyone, I have no plans to stop blogging. At this point I have to do it. People read it, it keeps me productive and it helps keep me organized. I totally get why Jennifer Buxton blogs about her work, it's highly motivating! My only thought was it would be easier if I didn't post the link onto Facebook. But it seems people really like that. So I guess I will keep doing it. Even if I forget until the middle of the morning sometimes :)