I have been busy for a couple of months. Pretty much continuously. That happens when we get close to TRXC. This year was even busier than usual. Not only did I have near constant doll making, I also had somewhere I needed to be every Saturday, and sometimes on Sunday too, for over a month. I had a memorial dinner, my brother's wedding, I judged 2 horse shows and then of course was the TRXC weekend.
I've been busy.
So after TRXC I decided I was going to take a vacation. Now vacation doesn't mean the same thing to me that it does to most people. I did not go on a trip. I did not get to stay home from work. I didn't do anything really exciting. So let's see what I did do.
On Monday after TRXC I upacked the car and worked on unpacking from the show and putting everything away where it goes. I also vacuumed out all the heat vents so we could turn the heat on. That was actually exciting since I don't like being cold.
Tuesday was the usual. Travis and I didn't have school because it was election day. I was supposed to go to a full day professional development but Travis had no school. So I took the day off and we went to the laundromat early. And then after that we went to Walmart. I did no doll work and I actually read a book. It was awesome. When I got home I did unpack a shipment of dolls and sort everything in my doll drawer. That was the closest thing to doll work I did. I also took a photo of my very large pile of dolls but I don't have the photo! This is not the first photo recently that I know I have taken and I seem to not have on my phone. I also took a picture of my sales stuff on the table at TRXC and don't have it. Which bums me out because it was cool looking. I will make sure to get pics of my table at the swap meet next weekend. Meening, I will actually check the camera roll to make sure they are on it.
Wednesday I did nothing. It was glorious. Well, actually I binge-watched most of season 3 of Atypical on Netflix. Thursday I finished it. At TRXC I picked up a Creations By Mit coloring book (created by Michele Katz Grieder). Friday I remembered I had it and I started coloring. I figured I would just start on page one. So I did. I started with the flying pig. I love this book. 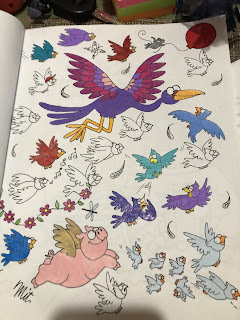 Other than sorting dolls I didn't do any doll work this week. Saturday I went to a vendor/craft fair because a friend of mine, who is a LuLaRoe consultant and moved across the state, was going to be there.  I really went to see her, but I found some cool stuff, including this piggie cup cozy. It is lined with pink glitter fabric, is thoroughly awesome and my friend has the same one so we can twin. It also matches my nails. 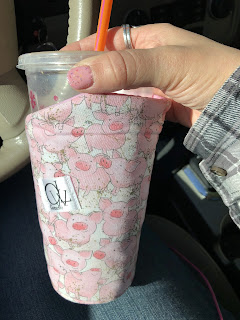 I did a bit of Christmas shopping for several people and helped my friend Amber make outfits with her LuLaRoe inventory. I really love doing that! Here I was trying to figure out if I liked this outfit. I really am not a fan of mustard yellow, but this looked good together. I could have stayed all day, visiting and making outfits. But Ethan and I almost never have days off at the same time, so I went home after a few hours.
And I started working on getting ready for the swap meet next weekend. I periodically will go through my props and pull out things I haven't used in awhile, or ever, and sell or donate them. The swap meet is a perfect excuse to do a bit more culling. Plus now I have my props tote better organized and the cover is closing properly again. 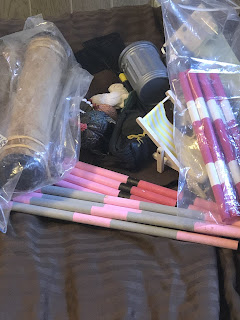 After the props sorting I binge watched Hulu for hours. Ethan joined me so we did get to hang out. It was a cold and unmotivated kind of day. But I have been so busy recently it was nice to have a day where I did mostly nothing. Good times.
Friday Travis and I did go out after school and get a bit of shopping done at Big Y. I saw a new ice cream that I had never seen before and since it has no sugar I decided to try it out. I have eaten worse things in my life. It is not as good as Rebel. It is not as low carb as Rebel. It is magically as soft as real ice cream directly out of the freezer. Which actually makes me really nervous. But it was a bit of ice cream and very few calories. Rebel is still better. 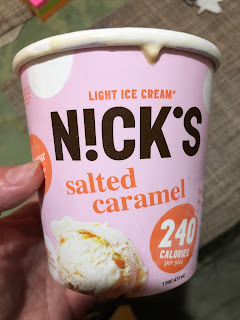 Pretty soon I will need to get back to work on dolls. I don't want to be a slacker forever. I need to start making some saddle bags, since that was such a popular idea. And my water bottles came in a few days ago. I also have some dolls to make, a pair of chaps and some boots. Things to do. I will likely do some work today. I have the day off and it's already too cold for me to want to be outside much.
I'm really glad I took a break from doll work, it was nice to have a bit of a vacation. Now that I am not getting ready for any shows or big sales any time soon I will probably also take it easier on things. Maybe just do a couple of dolls a week, tops. I do have some things I need to get done and then a few random dolls that are in my head that need to come out. Don't forget today to thank a Veteran for their service.
I had this post all ready and scheduled and I saw this photo on the Region X FAcebook page and got permission to use it. I like that I have a picture of my sales setup. This was definitely near the end of the day on Saturday, but it's fun to have this.