I have somewhat of an obsession with micro minis these days. I know I am not alone in this. I don't love each and every one I see, though being tiny I might love them more than the same horse in a larger size. I think my very first micro was this Maggie Bennett jumping mule from before the monthly club was even a thing. If I am remembering correctly he was a gift from a friend in one of those random gifting groups. He was also my "I painted this too" for NaMoPaiMo in 2017. And it made me want to get more micros. Not that the paintwork is good, but micros are awesome! 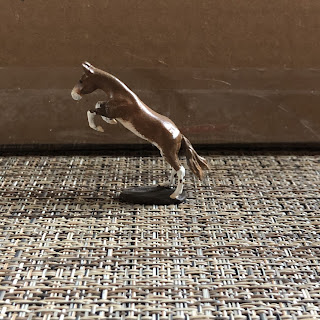 I think I was vaguely aware of Maggies monthly micros for a bit before I joined. I signed up in...whatever year Hugh was one of the months. And I got him and a couple of others (which I have since sold) and then I decided I needed to stop spending money. Almost all together. I was in a super life purge and savings binge! I wanted less stuff and more money. And to help with both I canceled all my subscription services (the others were Ipsy and Sephora and maybe something else). I sold two micros, but Hugh was my favorite of the 3 and I kept him. And decided he needed to be my 2018 NaMoPaiMo horse. He is also the horse that I painted that I am the most proud of. I might actually consider putting him in an open show. A mini open show, maybe. He's not perfect, but he is pretty good and still the best thing I have ever painted. 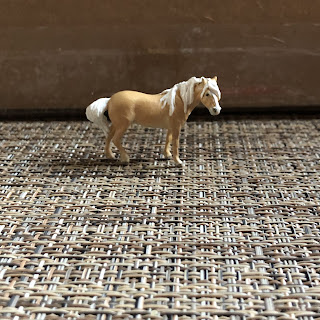 Doing a nice job on Hugh (whose full name is Hugh Can Do It) made me want to paint more micros. Maybe it is the tiny scale that makes it possible for me to do a good job. So right after NaMoPaiMo I started hunting for more micros on the secondary market. I got this cute little pony from Kelly Sealey 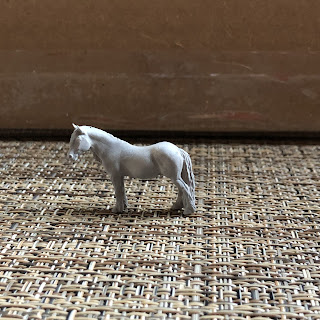 And this little draft horse. This was one of the horses I decided to paint over the summer. I feel like maybe it was after I was done my mad rush to finish up things for Breyerfest, when I was taking a break. 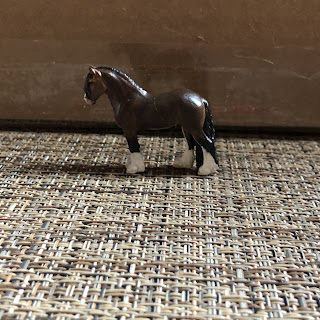 I also got this Kaladin sometime during my wild micro gathering phase. He got painted along with the draft horse. It's funny that I painted them exactly the same colors but the slight variation in shading colors (I mixed what I needed, when I needed it) makes them look different. I like them. Not as much as Hugh, but they are cute and make me happy. 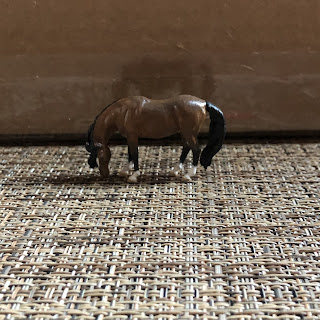 I seem to have a habit of buying micros from Morgen ever time she lists them. I just want to see if I can do it. Kind of like hunting the Breyer unicorns, I just want to see if I can find them all. So that is how I got micro Duke (2 actually, but one I grabbed for Marisa Spence.) and 3 Hazels, though all during different sales. I sold one to Tiffany Purdy since she had not managed to get one and I sent another one to her to paint for me. I recently sold my 3rd Hazel. Because while I am obsessed with micros I don't really NEED duplicates. Maybe. 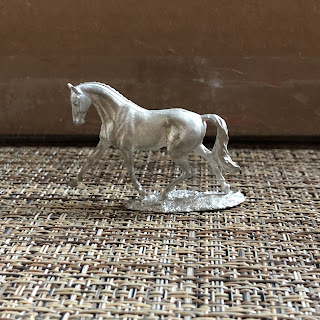 When I went to visit Jackie Rossi after Breyerfest we got to talking about the micros and she mentioned that she really loved the club but didn't love each and every micro. I asked about Sprat since he was one I had seen (still was not in the club) that I really liked. And since he is one she didn't love I got to buy him! That made me super happy. 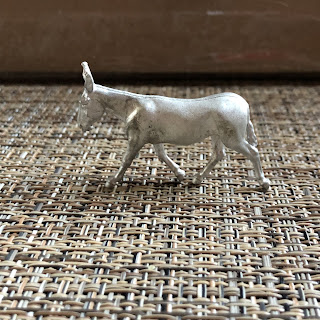 After I missed out on Maple Stirrup I decided enough was enough and I had to rejoin Maggie's monthly micro club. If I end up with horses I don't love I can always sell them. Lucky for me my first horse after I signed up again was September. The month of the bonus horse. So I got Tennessee... 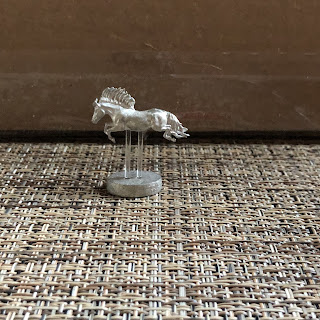 And Tennytoo, who I think is the one who will get to wear the wings. It was a good month to rejoin. 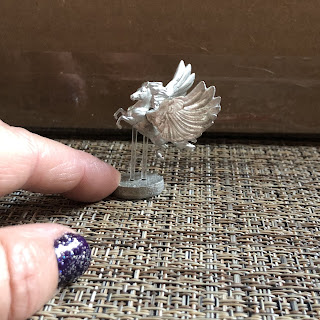 My next acquisition in micro mini land was Bangles.When I first saw her in a photo I was not sure if I liked her. And then she showed up at my house and I was pretty sure she was going to stay with me forever. 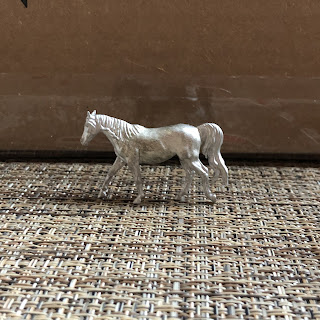 I did also finally get a Maple Stirrup. though having to pay a chunk over issue price was hard. But he is so cool! So now I am waiting to see what the November horse is. Any day now.... 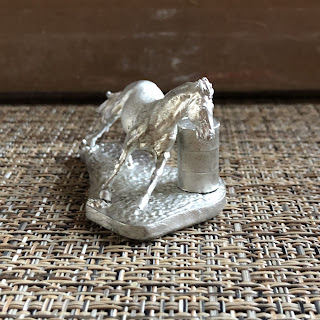 So I may or may not currently have a tab open to Kelly Sealey's page. I really want the Shetland pony (the circus pony) and I keep almost ordering one. And then rethinking it because currently I think that is all I want and the shipping is a bit rough for just the one. So I keep going back and considering.
I do also have a small collection of not-micro minis. But not nearly as many. It's really easy to justify a micro. They take up almost no space and you can put a whole bunch of them in one hand. I need to get to prepping them and work on some more painting. Having a whole collection of unpainted micros isn't bad, but having a collection of painted micros would be pretty great!

I am also obsessed. Lovely paint jobs!
I will never have a shortage of tiny things to paint...and they are so much easier to store and display!