The Anatomy of a Doll

I discovered something interesting at TRXC that I probably should have known, but had never occurred to me before. A lot of people have no idea what the dolls look like under their clothes. Which makes sense. Most people purchase their dolls already dressed from a doll maker and have very little reason to ever see the naked doll.
Our goal is to make the dolls look as realistic as possible. That is the goal of model horse showing in general. When it works it can be really impressive. I heard people saying how realitistic my endurance riding set-up was. And that was wonderful. That was my goal. But what do you do when something isn't right and you don't know how to fix it? If you have a doll maker handy, you can ask for help, but I want to give you some idea of how to try to fix things on your dressed dolls yourself. This post is full of naked dolls. If that makes you uncomfortable, don't go any further. 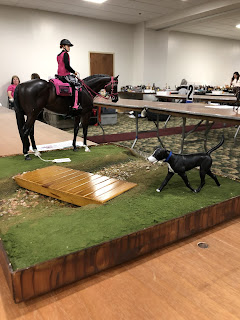 This is what an Yvonne/Gracie/Quinn looks like under her clothes. This is with most of her parts separated. These separations are some of the things that can go wrong with your doll. But only some. One of the issues I saw was a hip that was loose. One of my casual western dolls has a hip that like to pop out of the socket. Often. She was an Yvonne from way back and it doesn't bother me much because I can always pop it back in. If your doll pops a hip out make sure the fabric is out of the way and you can literally pop the hip back on over the ball. Hopefully the picture helps. When I am trying to put something back in place it helps to visualize what the doll looks like. 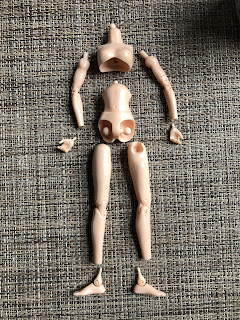 These next photos were an issue I saw for myself and told the shower about. It is a bit hard to see in photos, but it was incredibly clear in person. This doll sort of looks like her knee is broken. 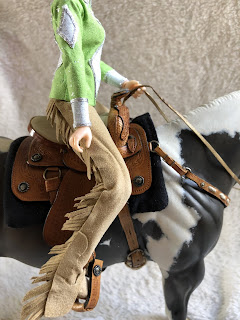 It has a weird curve instead of a proper knee shape. This is because the dolls have two knee joints. 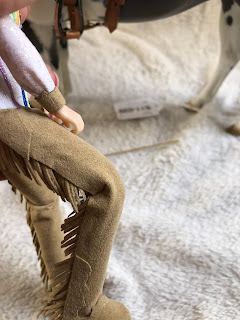 Here is the same bend with no clothes in the way. The doll has double joints in both the knee and elbow so she can move in a variety of ways. This makes her incredibly flexible and also gives you a lot of things that you can screw up as you set up your entries. 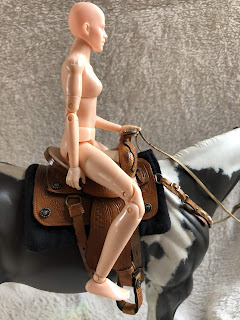 I took a series of photos of a naked, faceless Quinn, in the same way I would take sales photos. I have the left side. 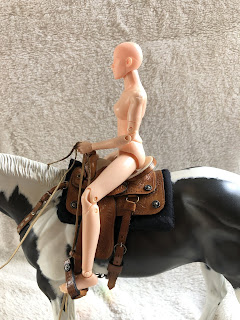 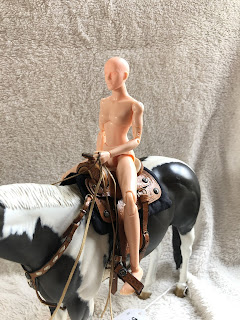 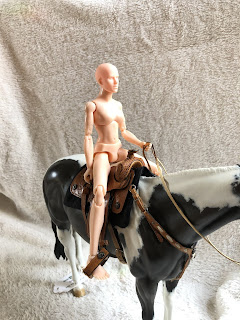 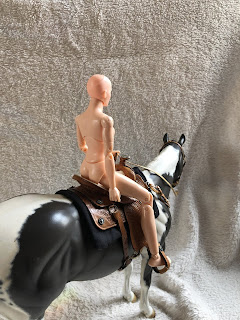 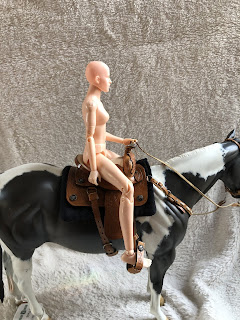 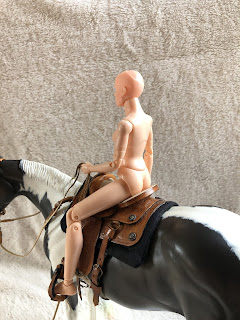 Not including the double joints in the elbows and knees, these dolls have a lot of joints.There are definitely a lot of things that can be out of place as you set up your entries. I always recommend looking at your entries from every angle. It is worth it to be thorough. And hopefully it is helpful to know what the dolls look like underneath their clothes.
Yvonnne/Gracie/Quinn is an amazing doll who can move in ways brenda Breyer can only dream of. 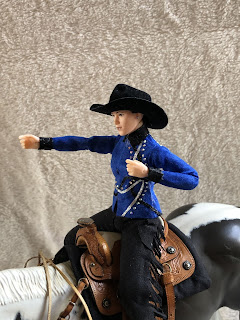 These dolls can be positioned in very realistic ways to add so much to our entries. We just need to watch for things to make sure everything is in place. Sometimes it takes a bit of extra fiddling, but it's worth it. 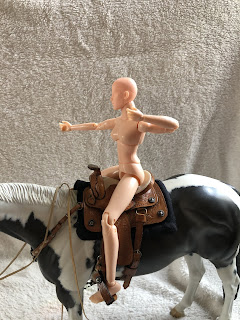 Hopefully this helps with some doll issues you may run into. Happy Showing!