I may be out of things to talk about. I may be too tired to do things which would generate things to talk about. I may be getting sick, it's hard to say. But yesterday morning my alarms didn't go off so I didn't get up until a half hour after I was supposed to. That extra half hour of sleep left me exhausted all day. I also have a vaguely scratchy throat. And Travis and Ethan seem to be sick, it would follow that maybe I too or will be soon. I'm frustrated.
Then I got a big order of miniature water bottles in the mail. Each one was individually wrapped in plastic. This frustrated me on so many levels. It was not even nice, reusable little plastic bags. It was those flimsy bags that have so much static charge they stick to everything and rip if you look at them funny. But never in a way that makes them easy to open. Yeah, super frustrating. And all the waste... it hurts. Another frustrating thing about the bottles is the majority of them are the wrong shape. I ordered round bottle to use with saddlebags and while I did get some, most were square. I guess I could use those, but I think they would look terrible. So I either need to use them for something else or... well, that is my only option really. I reread the ad and they had it buried in there in tiny print that it would be a "random assortment" so I didn't just get the evian bottles I thought I was getting. *sigh* sometimes little things frustrate me. 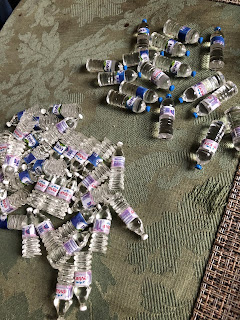 In other frustrating news, our Internet was out Sunday night. And it was out yesterday morning and also in the afternoon. So I called Charter to see what was up with that. The first thing they want you to do is to unplug the modem and so on. When I do that my phone cuts out. So I tried to call from my cell phone. My cell phone constantly drops calls inside the house and I can't work on the Internet from my driveway. After 4 or 5 calls on both phones I said agent over and over until the computer got me a person. She was wonderful (the person, not the computer). Really sweet and she disarmed my bad mood in one sentence. She just sounded sweet. And she was patient while I tried to dig one particular cord out of the spaghetti mess that is the cords behind the computer. How does that even happen? Anyway, while I was searching for the correct plug to unplug I found.... a plug. It was not plugged into anything. And it was the modem plug. I plugged it back in and all of a sudden the lights came on and everything worked again. And I felt like an idiot. So what happened was the other night, the plug for the modem fell out. Which is not super surprising since the power strip is screwed upside down under a cabinet. It's sort of surprising it didn't happen sooner. Anyway, my Internet is fixed and that all took way longer than I expected it to. And, you guessed it, was frustrating.
I did get some doll work done, though it was very little. I got a couple of outfits cut out and a youth doll head balded and ready to be rehaired. I think that was everything I managed. I might have time to do some sewing today, or I might not, it's laundry day. Maybe I can at least hair the youth doll head. My goal is to get two dolls done this week. And so far it seems like that might be a struggle. I just don't feel like doing anything. But those two need to get done.
More and more I am leaning towards doing a live sale for doll stuff. I think that might be an interesting way to do my Black Friday Sale this year. I could show the dolls, horse boots and whatever else I happen to have for sale. And since it would be part of the black Friday sale, everything would be on sale. I might also do some drawings or something, if I can think of how I want to do them and what I want to do. But I definitely have to work out some details. For now though I will say I probably want to do a live sale on Black Friday. It would most likely be at 3:00 EST because that would be a fairly convenient time for me and would allow for everyone, at least in the US, to be awake and not have to get up particularly early if they don't want to. I may end up talking to myself, but sometimes it already feels that way, lol. So what's a bit more? I'd also love to hear any ideas and suggestions about this plan that anyone might have.
Posted by Field of Dolls Studio at 2:30 AM

Sorry to hear you're feeling so down. Hope things turn around for you soon.

((hugs))
I think a Black Friday sale sounds like fun!!

There seem to be more active hobby bloggers now than there had been for a while. I keep thinking I need to come up with a really good blog hop for all of us, but so far it hasn't happened yet. Hang in there.