Since my day was getting busier and more stressful I was only taking win photos. I also started cutting planned entries when I started to feel frazzled, which was often. So even though I did show some other horses in the rest of the English classes, it kind of turned into the Halestorm section.
The first class in this group was the Stakes English Games class. I showed Mocha Latte with her horseball set-up, but I struggled to get it to behave and it just wasn't working out. I also forgot to make the strap that holds the stirrups down. Oops. But Halestorm did really well, winning champion in English Games with this candy race. This entry is really hit or miss. But I made a ton more candy and a new pattern to go with it. I had a custom sized bucket made. That all seems to be helping. 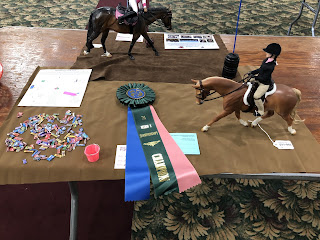 The next class was Stakes Other English and I had Caramel Latte in with her therapeutic riding entry. But there was a bunch of other really cool stuff on the table so it didn't place. After that was Stakes English Trail. Halestorm again won champion. Caramel Latte and Mocha Latte also showed in the class, but didn't place. 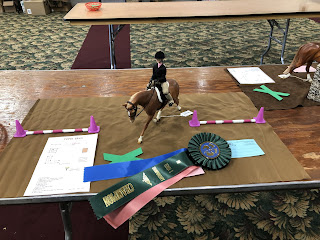 Up next was Stakes Dressage and I had some fun taking photos from unusual angles. 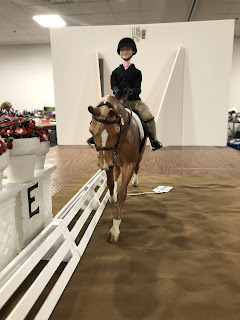 Marisa Spence taught me how to set up dressage entries years ago. I have had so many helpful pushes from friends over the years. 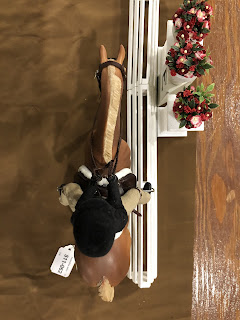 Halestorm ended up with reserve champ in Stakes Dressage. What a good pony! 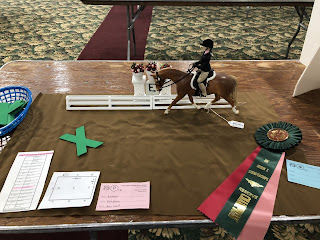 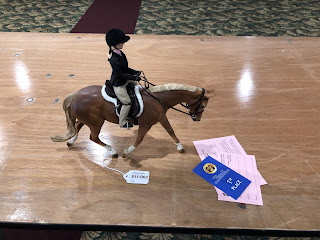 And then went on to get champ in Stakes huntseat pleasure. Caramel Latte and Mocha Latte didn't pin in that class. 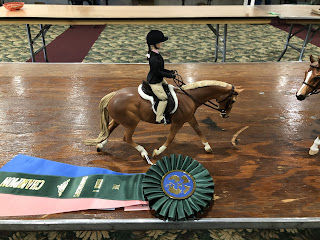 Halestorm was doing incredibly well by the end of the English classes. I can't believe I ever thought it was a good idea to sell this pony! I originally bought him from Joan Yount, sold him back to Joan Yount and bought him back from Joan Yount! I think now I need to keep him. And keep showing him.
Posted by Field of Dolls Studio at 2:30 AM