I meant to finish up several dolls on Friday. That didn't happen. I didn't even take anything out to work on. Friday was Valentine's Day and Ethan had a pretty big surprise for me when I got home from school. For a year or so our TV has been half broken. We have an ancient box TV. It has to have been at least 10-12 years old or older. It's a square screen, so we miss a lot of what is on the edge's of newer movies and shows, since they are not formatted square anymore. The top 1/4 of the screen was always fuzzy, so we would miss a lot that way as well.  But it still worked. So for Valentine's Day, Ethan got us a new TV. A nice flat panel (well, they all are now, lol) that he mounted on the wall. It isn't ridiculously huge, but it's a lot larger than our old TV. Plus the whole thing works. So we hung out, watched some movies, made a semi-fancy dinner, and I did no work. And that was totally OK.
Saturday was a lot of fun too. It was another day where I meant to do some doll work, and that just didn't happen. I got a bunch of gift certificates for an escape room for people for New Years. Since Ethan is going to be working on Saturdays again, and Saturdays are the only day the works well for everyone, I figured we had to make it happen. So I got ahold of Elecktra and Peter and they were in. I talked to Crystal and she wasn't sure she was up to it since she had a nasty migraine, but we pushed the time back until later in the day. I worked on Little Elecktra worked on her Bangles and I think she might be done. I'll check her over in the daylight and see. But I think she might be done. 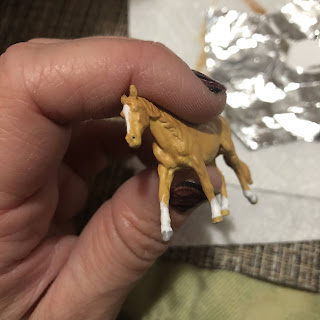 So we are not allowed to take any photos in the escape room since they don't want any clues to be out in the world. They really try to keep things super secret so as not to spoil things for anyone else. We chose Treasure Island for our room and basically we had a ton of locks to unlock, it was wild! We did manage to solve the puzzle, unlock the door and we had time left so we kept on going to see if we could solve the next level of the puzzle. We didn't make it, but we made it through the puzzle we meant to solve. It was a ton of fun! I am definitely into the idea of doing escape rooms again. This was an excellent way to spend a portion of our day! 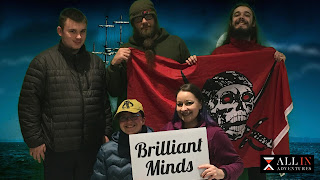 Sunday, again, I vaguely had the idea that I would finish the dolls I started last week. But, again, that didn't happen. The first thing I got into was helping Travis clean out some of the mess in his room. He lost a couple of things (a tiny skateboard and a big U-shaped magnet.) He got them from Deb and Yvonne at an estate sale they did. He now keeps them together and he was really upset when he lost them. He searched for days, he kept asking me to look for them, but they were nowhere to be found. So I decided to take out old papers, broken stuff and so on. It's been awhile since I did a clear out in his room. I also found the skateboard and the magnet. While I was sorting and cleaning, Travis was helping Ethan sort change. Ethan gave him some money for helping with the work and we ended up going antiquing. We went to a couple of indoor flea markets and a couple of antique stores. Travis found some giant action figures for his extensive giant action figure collection. As we were getting ready to head out of the last place I saw this doll, way up on the top shelf of one of the booths. This is the Franklin Mint Morgan Le Fay doll. I have actually been looking for her for years. She's pretty much always on ebay but not usually for less than $90, and sometimes as high and $400-$500. I got her for $15. I couldn't responsibly leave her in the store for that price. 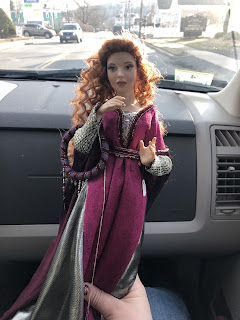 So I didn't get any doll work done, but I spent a lot of time with my family, and that was way better. I'm on vacation this week so will likely have at least some time to work on dolls. Other than that, I will just see what the week has in store for me.
Posted by Field of Dolls Studio at 2:30 AM