Some Days Are Harder Than Others

Wednesday was a sort of hectic day. I had to call the special ed secretary to figure out what was going on with Travis's bus monitor. It was not too challenging and I got it quickly worked out. I also went to talk to the athletic director to try to figure out some track stuff. While special needs kids are not necessarily barred from the regular sports and activities, the sports and activities may not be accessible to those kids. Which basically makes them unavailable for a lot of the kids. I did also hear that sometimes unified teams will co-op with other schools. If the numbers are not there in one school, they will team up with another school. But we were never given that option. We were just told that there was not going to be unified track this year. Actually, let me correct that. "we" were not told anything. The only reason I know is when the job postings came out for coaches for Spring sports, our coach noticed unified was not listed. So she asked the director, who told us the numbers were not there. She told me because I brought up track. When I went to talk to him the director said that no one has come to him other than me. I said that no one knows other than me, how could people come and ask if they don't know? In the end I told the athletic director that I wanted him to look into all the options for me( regular track and co-oping with another team), because I am just going to keep bugging him until something gets done. These kids deserve to have something. And preferably something that doesn't leave them always last.
I had a variety of other school things that I needed to take care of as well, all of these things needed to happen in the same short amount of time (the only time I had to get them done). When I got home I was, again, super tired. I struggled to get started on doll work and then it remained a struggle to get work done. Eventually though, I managed to get several outfits cut out. 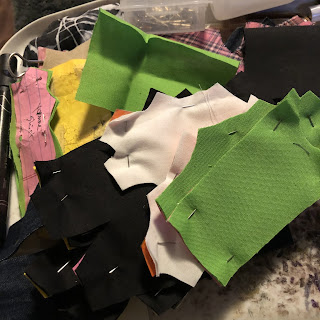 Then I worked on getting the prepared saddlebags glued. I still have several steps to get to before they are all finished, but I at least got a good start on them. Even small progress is good progress. Lime green and black seems to also be a theme in my work this week. 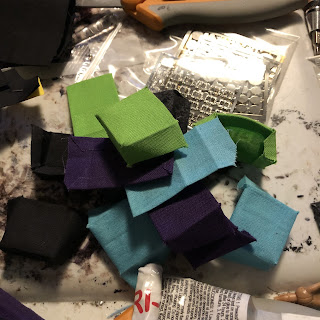 So Wednesday was sort of hard, but it could have been worse. I got a lot accomplished on stuff related to Travis, even if it was just getting the ball rolling on some things. I did manage to get some doll work done, even though it was not necessarily as much as I would have liked. But I still have about 4 weeks until my live sale. I still have time.
The other day I was listening to the latest episode of Mares In Black and I feel now is a good time to reveal the doll I made for the giveaway that they mentioned. I thought it would be funny to make a "mare" in black, so that was what I did. This pensive lady will be given away, though I don't know how Heather and Jackie will choose to do the giveaway, that part is up to them. I thought it would be a lot of fun to take her picture in my pink chair that was made by Terri Wright of Priam Costumes. She donated a similar chair to Mares in Black, which was given away. about a month ago. I love giveaways! 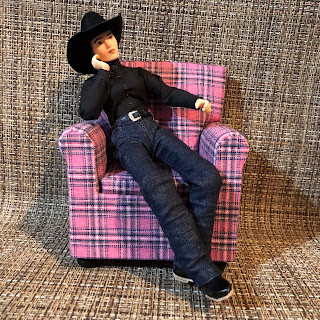 Seeing as I have only 4 weeks left before my live sale, I need to start thinking about organizing a bit more. I want to figure out what I have for prizes, come up with trivia questions, work on making numbers and, of course, finishing sales items. I need a more complete plan!
Posted by Field of Dolls Studio at 2:30 AM

What a great idea with the MIB! But those 4 weeks will fly ---