I Do Still Make Dolls

I do still make dolls. I know it may not seem like it, since the last week (about?) has been NaMoPaiMo posts. But there was so much to talk about! The explosion of people who joined #teamminispaintingminis and all the photos. Me actually working on my own NaMoPaiMo project a bit. Little Elecktra working on her project, Travis finishing Brown Horse. I had so much to talk about! I probably could just keep on posting about NaMoPaiMo, but I do still make dolls. I am not working quickly or doing anything super exciting, but I am working at least some.
So the other day I managed to cut out a few doll outfits. I was somewhat impressed with myself since all I actually wanted to do was read. 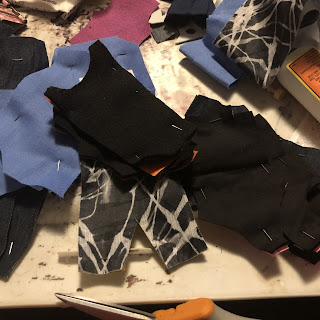 I even managed to hair a couple of heads. I made a little bit of progress on Wednesday, but then Thursday was rough. I sewed the clothes, which took much longer than it ever should. I started dressing the dolls and I ripped the seems out of not one, but two shirts. It was incredibly frustrating. And I was cranky in general. I am tired of winter. I know it has been incredibly mild but I still hate it. I hate what it does to me.
So I was very frustrated and stopped working much earlier than I should have because of it. I did decide to cut out the shirts again and even got the sewing machine out to do them over. I double checked all the seems and everything was good. I felt a little bit better. 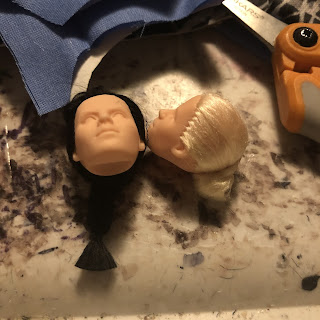 Friday was another rough day. I was in a much better mood but I was still working super slowly. I have no idea why. I managed to finish a cowboy doll but he took much longer than he should have. But now I have another doll finished and ready for my live sale in March. And a different face! Doll diversity makes me really happy, we have so little of it. And this guy is super realistic. I think I need to take some comparison shots of him with on of the beefy cowboys. I think his legs might be about the same length, but his torso is longer. He is definitely taller than the beefy cowboy or the Breyer guy, but people come in different sizes. Anyway, it took about a month longer than I planned, but I finally got one of these dolls dressed. Other than that I got a couple of other pairs of boots traced out but not cut out. I worked so incredibly slowly. 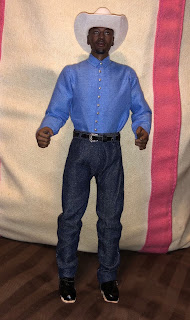 Even though I am almost constantly distracted by thoughts of NaMoPaiMo I do still make dolls. I have less than 7 weeks left until my live sale and I really need to get stuff done for it. I don't have any firm plans in place. I have a lot of vague plans, such as I need to finish all the saddlebags I started and I need to make more. I want to make more pairs of chaps and I should probably do at least some horse boots. And more dolls, though I am not sure what kind. I had some ideas of making miniature candy and maybe miniature fair foods. All my plans are sort of vague, but I am looking forward to the live sale. Most of the things will be retail price, but I will have a few surprises that will be discounted. And I will have prizes again! Because I do love prizes. I think now I will get back to thinking about what I need/want to make for dolls and doll items. And thinking about working more on my NaMoPaiMo horse. I am having a lot of fun creating my next performance horse.
Posted by Field of Dolls Studio at 2:30 AM