Sometimes You Meet Someone Amazing

Tuesday started out a bit rough. When Travis's bus came to pick him up the monitor asked when it was decided he didn't need a monitor anymore. I said, that was never decided. She said that someone called the bus company and said it was in the new IEP. Then I said, what new IEP? We don't even have a meeting until March 11, there can't possibly be a new IEP now, at least not one that can go into effect. So that was troubling. I called the special ed secretary, but as it was 6:45, I wasn't surprised she didn't answer the phone. I also called several more times with no luck, so I sent her an email to ask when was a good time to call. I got one of those auto responses that she was not in the office for the day. So I emailed the special ed director to see if she knew what was going on. I didn't hear back to her. At lunch I was telling my friends the story and they said why don't I talk to the assistant special ed director, who might even still be in the building. Well that was a brilliant idea. So I sent her an email and then didn't hear back from her for awhile. She did actually contact me later on in the day and I went to talk to her, told her what the monitor had said and she said she would look into it for me. Which was wonderful. I got an email from her in the evening saying I needed to call the special ed secretary in the morning. So the situation is ongoing. But I am hopeful.
When I got home from school there was a package on the table for me. It was from my friend Jenn, and had a whole bunch of Color Street samples. Color Street strips are nail polish strips that are super easy to put on. Some people have seen doll photos lately, where you can see my nails, and commented on how good they look. I'm hosting a Color Street party on Facebook in a couple of weeks but I got the samples now so I can give them to people that want to try them out. 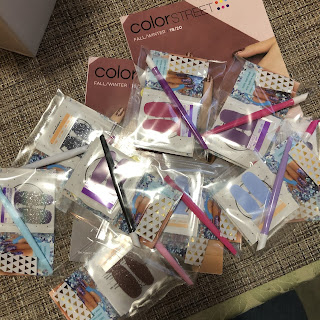 So I went from my really frustrating morning to a happier afternoon. Crystal and her Mom came by, which is always nice, because I love them both. They were dropping off Ethan's shop vac and Trader Joe's peanut butter. I have never had peanut butter delivery before, but it was great! Anyway, I had received a cool package, got a visit from some cool people, and then it was time to head off to the laundromat and some errands.
You never know who you are going to meet, or run into, in the laundromat.I have run into students, teachers I work with, had to get loud with old ladies because they were needlessly mean to Travis and then there was the woman I met today. She was an amazing human being. One of those people that you just want to spent time with because they have a good energy. When I went in my plan was just to put the laundry in to wash and then head out to do a bunch of errands. Then I was going to go back, put the stuff in the dryer, listen to Mares in Black and get some work done. When I came in this woman was talking to a young guy and they were clearly having a good conversation. A couple of minutes later he said it was great meeting her and he headed out. I smiled and was going to make the comment to her that it was so nice to see people actually talking to each other out in public, but she spoke to me first. I don't even remember what she said, but it was pleasant and we pretty much instantly fell into a conversation. And then I just stayed. I did go out and properly park the car and brought Travis in, but then I stayed and chatted. It has been such a long time since I have met a person that was clearly an old friend on first meeting. Once I got the laundry in the dryer I did have to head out to do the errands.
We went and dropped off some medical release forms so Travis can participate in Special Olympics. We went to the post office and then we went to Big Y to redeem to cans. There was a guy already using the machines, and he had A LOT of cans and bottles, but he moved aside and said we could go ahead. Which was definitely appreciated! Travis was being Travis (so making noise) and the man sort of glanced at him, looked at me and asked if he has special needs. I said yes and he smiled and launched into a story about some family member who works with kids with special needs and they are just amazing and so on. He told me he had a liver transplant and his doctor told him to start walking. So every morning he goes walking around town and while he's out he collects cans. In 2 and a half days he had over $20 in cans and bottles! So not only is he following his doctor's orders, he's getting some money besides. And he was so nice! I told him to keep up the good work and that his grandkids were lucky (he wants to stay alive for them), Travis and I got more seltzer and headed back to the laundromat. My new/old friend was still there (her comforter would not dry) and we fell back into some more conversations. She told me all about a friend of hers with a son with autism and said Travis actually looks a lot like him. When I was done with my laundry I wanted to stay and talk to Sandra, (we took a long time to bother with getting to our names, lol) but I needed to get home. Tuesdays are crazy days and I have a very strict schedule.
The day started out frustrating and continued into frustration for awhile, but my lunch friends gave me good advice, assured me it was probably just a mistake and that it could be fixed, but listened to my concerns. The assistant director did everything she could to help me find out what was going on. I got to see Crystal and her mom and I met two amazing people. I wish every Tuesday was that good.
Posted by Field of Dolls Studio at 2:30 AM