Tuesday was going to be the day! I was going to finish up the 3 dolls I had in the works that I meant to finish on Friday, I was going to work on chaps at the laundromat, I was going to go to Joann's and get some material I need for some new orders and I was going to at least cut out a few outfits. I should have had time for all of that. I didn't end up getting all of that done. Are you surprised? I'm not.
So I figured that if I got started on finishing the dolls first thing I could finish them up in just a couple of hours and then get ready to go out in the world, go get the laundry done and execute the rest of my plan. I put on the latest episode of Mares In Black and got to work. I was making some reasonable progress for probably about an hour and then I heard the UPS truck drive away. I figured Ethan had ordered something, so I went to bring in the package. I checked the name and it was not for Ethan. Or me. It was for one of my neighbors. The way the trailer park is set up I was not even 100% sure WHERE they live. And I am not the UPS guy. So I came back in and tried to find a number to call to get them to call the driver to come back and fix the mistake. I almost let it go, figuring I could just drop off the package myself when I went out. Then I thought about what would happen if one of my packages got delivered to one of my neighbors. Chances are, I would never see it again. No, I am not being mean, it has happened several times in the past. So I called UPS to let them know they misdelivered the package. I hoped that they could also just quickly get the driver to fix his error and I could let them know that an error occurred and they would maybe pay better attention to numbers in the future. Easy right? Not even a little bit. 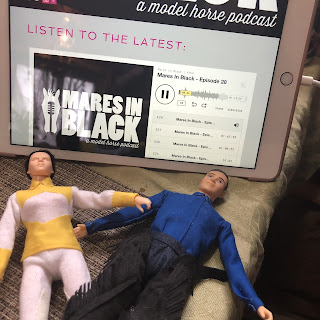 It took at least a good 20 minutes on the phone and really, nothing got accomplished anyway, other than me being cranky. I ended up bringing the package to my neighbor (who I discovered lived at the extreme other end of the trailer park) and I was not focused and finishing the dolls then took forever. Much longer than it should have. But I managed to get the 3 dolls done that I had been working on and I got photos, sent them off, got approval and packed some dolls to ship. I was so far behind at this point and very anxious and frustrated. 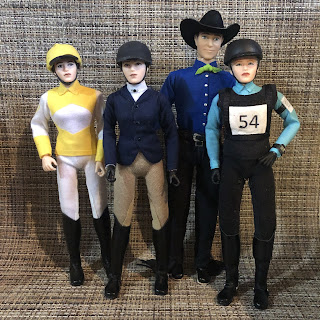 We went and put the laundry in and then went to the bank (finally got the penny rolls!) and we went to the post office. Then we went back to the laundromat and I got to work on some chaps. I figured it was a good laundromat project. I got most of 5 paired traced out and 2 put together, but the mens chaps didn't get cut out or assembled. I had somehow forgotten to bring the fringe pattern piece. Grr. But it was time to fold anyway. 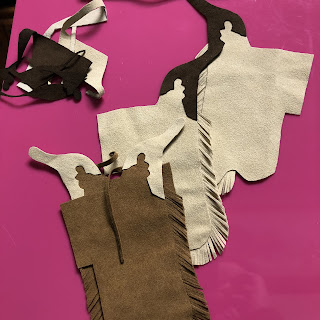 After everything was folded we needed to bring the laundry to the car in the rain. It seems to rain more often than it doesn't on Tuesdays. It's pretty frustrating. We had to go to Big Y and I was not in a super mood. But I managed to get the handful of things we needed and went back out in the rain. I didn't have time to go to Joann's and I definitely didn't have time to cut out any doll clothes.
I did manage to get 3 dolls (finally) finished and some chaps worked on but Tuesday was a very frustrating day. I am hoping that I can get back to being more productive soon.
Posted by Field of Dolls Studio at 2:30 AM