Last week was February break, and I thoroughly enjoyed it. We did a lot of family stuff and I managed to get a decent amount of doll work done. This week I had to go back to work and I was hopeful that I could get some stuff done on Monday. Usually the first day of having to get up early again isn't too bad. Then the second day the lack of sleep catches up with you and you are sort of useless by the end of the day. But my Monday didn't turn out that way. My energy started to flag shortly after I got home. I decided to take the tiniest of naps. That part sort of worked out, though I was not ready to work after my catnap. Maybe it was the gorgeous (63 degrees) weather that I was too tired to go out and enjoy. Maybe it was the less than 6 hours of sleep I got on Sunday night. Hard to say. But no doll work got done on Monday, which is OK. Part of my mindset these days is to be OK with things that are not hurting anyone. It doesn't hurt me to not work all the time. It doesn't hurt to switch up my work plans and go and do fun things with my family, or even just do nothing with my family. As long as I work sometimes, everything will be OK. And that is my goal.
So while the plan to cut out and sew some doll clothes didn't happen, I did pull out the last few leftover items from last year and get them written into my inventory list. I started doing this last Spring when I was prepping for Breyerfest. I would try to keep an organized running list of everything I have. For Breyerfest this was partially so I had an idea of what I sent to Jackie (it was good I forgot to send the list with all the totals or I may have given her a heart attack!). Anyway, I make the list, I keep the list and as things sell I mark them as sold. Easy enough. Then when one big sale is over, I can transfer the old list onto a new page and start the prepping for the next big thing.
This year I am not starting with Breyerfest prep, I am starting with my birthday live sale prep. Are you guys bored hearing about that yet? Do you just have no idea what I am talking about? Does the word sale immediately invoke thoughts of discounts? Let me do a bit of explaining for the interested. And then I can talk about something else. Last Fall, Black Friday to be exact, I did a live sale on Facebook. I modeled it after a LuLaRoe Live sale, since I have seen a ton of those. Paparazzi does similar sales as well, as do other companies. Basically, I started a live video feed, which was up on my Facebook studio page but could also be shared to other pages, and I showed my inventory. I could answer questions in almost real-time (there is a very slight delay) and people could claim items they want. For my Black Friday sale everything was discounted. I have held some variety of discounted Black Friday Sale for at least the last 7 or 8 years, maybe longer. But "live sale" literally just means that it is happening right then. The reason I am explaining this is I am sort of fearful that people will be expecting a discount sale and might be upset with mostly retail prices. Not to say I won't have any discounted items, because I will, but mostly everything will be retail. I will also again have trivia and prizes. Hopefully people will be as interested in it as they were in the first one. I know not everyone loves the live sale selling platform. But I enjoy it. A lot. I love the interaction, even when the pace gets a little frantic. So currently that is my focus. 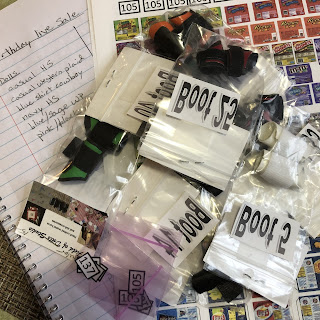 Some of my leftovers were items that people claimed during the Black Friday sale and then didn't  pay for, or ever contact me again. That sort of thing is discouraging. Luckily, I didn't have much of that. Between Sunday and Monday I made a list of all my sales items. Conveniently, the stuff left from the last sale still has backwards numbers on it. Why backwards? Because when you flip your camera it turns everything backwards. I learned that watching so many LuLaRoe sales. So I flip all my tags before I print them so they read properly on camera. Prepping for a live sale is work, but most of the work is making the sales items. That is going to take the longest amount of time no matter the eventual selling platform. But I have been enjoying making a quantity of items and then sending it or bringing it to a location for people to see it. Last year Jackie Rossi took my stuff to Breyerfest for me. It was awesome. This year I have another offer for Breyerfest that is very interesting, though I don't know if it's supposed to be secret so I won't share it just yet. For now I will focus on my birthday live sale. Why am I calling it my birthday live sale? Because I wanted to do a live sale and I thought, when would be a good time. And I decided on "my birthday" but I didn't want to have it ON my birthday because for the last 3 years I have worked on my birthday and every year it was a bad idea. Not as bad last year though. Anyway, my birthday is March 29th. My live sale will be the 28th. Which is a Saturday. I am planning on 2:00 or 3:00 pm EST, I haven't settled on the time yet. I have already asked Elecktra to come help me this time and she has agreed. So on the 28th Elecktra and I will go live on Facebook. Mostly me, she may not want to be on camera, but she will there helping me stay organized.
There are about 10 weeks left for the seniors. Then they are done. I work with just about all seniors so I have no idea what I will be doing after they are gone. Maybe they will turn me into a substitute and I will just cover classes, I have no idea. No one else seems to know really either. If they don't have anything for me to do I will have 5 or 6 weeks of work with nothing to do. Which sounds horrible. So we'll see. I have some time before I have to really worry about that. Maybe I will have a ridiculous amount of free time and somehow be able to have time to work on dolls in school. That would be efficient!
Posted by Field of Dolls Studio at 2:30 AM