There is only a week left of February, so only a week left of NaMoPaiMo 2020. Which meant that Saturday was hoof painting day! I needed to find a good tutorial for doing shell colored hooves in acrylics, and I found Cristina Riley's YouTube tutorial. The instructions were very clear and I took some notes to make sure I knew my steps, and then I got started. This was several layers of different colored stripes, with a wash of a very transparent pale tan color over it. They are not so realistic that it would fool anyone, but they look pretty good. I won't be embarrassed of my pony's hooves in the show ring. 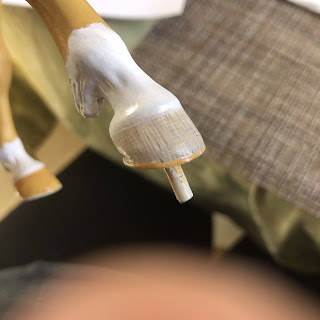 White I was endlessly painting stripes (each hoof probably took about an hour) I ended up holding the pony in some really odd positions. I noticed at one point that I had a little hoof print on my arm. Ballycor has sculpted frogs and sculpted on shoes. She is a really cool pony. 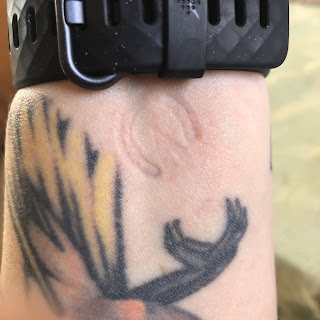 I got through the hooves, did the chestnuts, and decided I should just go on and do the eyes. I like the hooves so much more than the eyes. 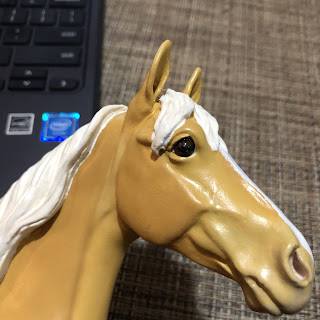 But at least now my pony has eyes, and they are not just black dots, even though they sort of look like it in these dark photos. The gloss helps a bit. 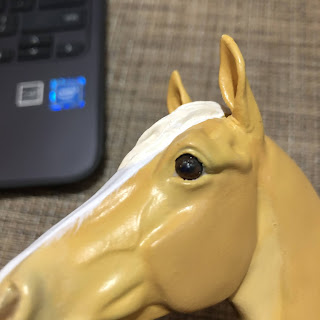 Since I had already come this far I decided to paint the shoes. Silver paint is one of the most annoying things ever created. I don't know if anyone out there knows of a silver paint that goes on in one coat, without a base coat, but if it exists, I don't know what it is. This is base coated in black with probably 3-4 layers of silver on top. 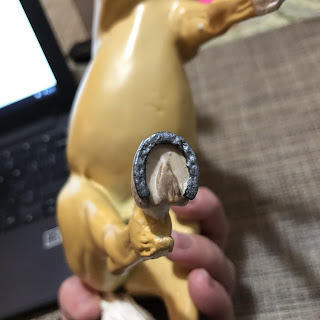 I did a bit of detail work on the undersides of the hooves. They are all sculpted so I sort of felt like I should. And this one will actually show, so it really needed to get done. They are another little detail that I like, but don't think are amazing. I might have to learn some new tricks and come back to Ballycor at some point in the future. 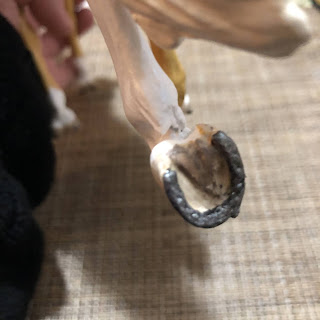 So I managed to finish up my NaMoPaiMo pony, but it was too dark to get any glamor shots. I also want to put her in tack and see how she looks. She is destined to be a performance horse after all. Though I am sort of thinking she might get a few more layers of matte finish and a regloss on her eyes before tack ever happens. But at this point, she is done, I did it!

I love using silver alcohol ink instead of paint. I've used it to cover plastic and metal in one coat... maybe give it a try!

Congrats on finishing your NaMoPaiMo pony! She's so sweet :)