Thursday was sort of a rough day. I was very tired at school all day, some of which might have come from all of the extra walking I did. One of my students needed another long walk around the school. They had an upsetting day recently, which was bringing up bad thoughts and talking it out helped some. I found out some more things that made certain fears clearer to me, but also made me very sad. I wish there was more I could do to help. But walking and listening is pretty much it. By the afternoon I thought I was potentially getting sick. I had a bad headache, was a bit foggy brained, my neck hurt and I had a scratchy throat. But I am allergic to mold and it had been raining for two days. So more mold equals a more scratchy throat. I got home and had a large pile of packages on the table. Which I was too tired to open. So I went to take a bit of a nap. I didn't feel 100% better after it, but I no longer had a headache and didn't feel foggy brained anymore. I did still have a scratchy throat, but you can't win them all.
So I opened the packages and in one of them was my Micro-naut from Rayvin Maddock. He is super cool! So he's on the shelf with the other unpainted micros. Waiting to get washed and prepped. I should probably stop buying horses and paint more of them. That being said, my February micro from Maggie Bennett should be here soon... 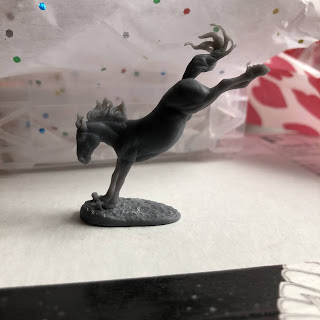 So Thursday was a very tired day and I struggled to get working after my short nap. I struggled to put away all the low carb snacks that were in one of the packages (I ordered a lot and could not find space for them, lol). But I did eventually get started. I pulled out the sewing machine and cut out the clothes for a casual western doll that was ordered. I put on episode #30 of Mares In Black and I got to sewing. I was really excited to hear that I, and my upcoming live sale, were mentioned again. It's always fun to get a mention on the show! So I listened to the show and got 3 outfits sewn. I had another one cut out but decided I was going to save the 4th one for another time. Saddle seat coats take a lot more time to sew than some other things. 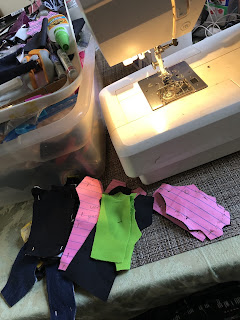 So after a sort of slow start and some sewing, I got into dressing the casual western doll. I already had a body prepped and ready, which helped and saved some time. By the time I decided I was done working for the day I had most of the doll finished. She needs her head haired, face painted and a hat and earrings, but then she will be finished. I was incredibly efficient and I hope I can have a lot more days like that for the next 4 weeks. 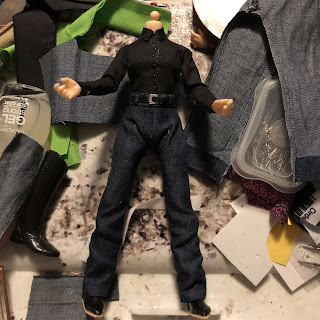 Up next I have a casual cowboy in the works and another casual English doll. I am not sure if I can get both of those finished in a day, but I have a good start on them. Then next week I have a formal saddle seat doll planned and will do something else as well, I just currently have no idea what. Maybe another hunt seat doll. Or... I'll have to think on it. Soon I will need to get more work done on the saddlebags. Maybe at the laundromat on Tuesday. I have to cut all the pieces for the lining and put them all together. That's not a bad Tuesday plan.
Posted by Field of Dolls Studio at 2:30 AM