NaMoPaiMo is going on all through February, but for Travis, NaMoPaiMo is finished. He told me he wanted to paint with me, he hurried me along when I didn't get him his paint fast enough and then he quickly got to work. 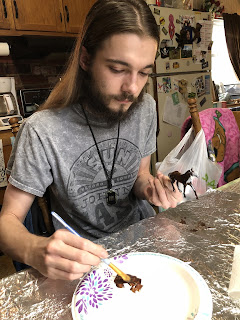 There was some deep concentration from him and he very speedily covered his horse with brown paint. Then that was it. He didn't want to paint anymore. I asked if he wanted to put eyes on his horse and he said no. I said your poor horse can't see, can you give him some eyes? He said yes, and his horse got eyes. I asked if he wanted white on his horses face and he said no, then he said yes. And brown horse got one of the most unique facial markings I have ever seen. 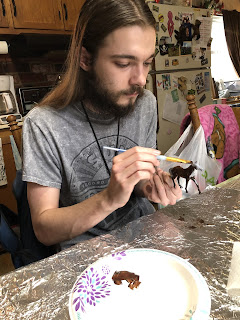 Since Travis said he was done I sprayed his horse with matte finish so the work would last. 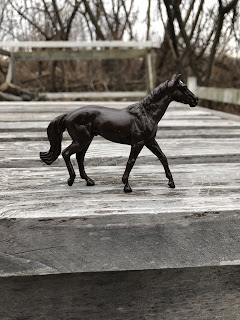 We had an outdoor photo shoot and made sure to get a photo of each side of brown horse. 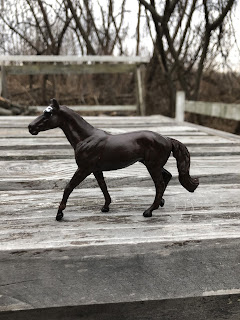 We also get a slightly better look at brown horse's star. 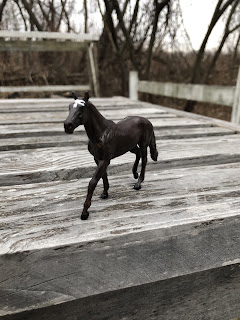 This year was the first time that Travis joined us to paint a horse in February. It was also the first time I asked him if he wanted to paint. He chose his horse, quickly decided on his color and he did an excellent job making his horse brown. For Travis, NaMoPaiMo is done and he is ready to move on and do something other than paint. Most of the rest of us still have a long way to go, myself included. And while Travis is done with painting, he will always have brown horse, who he painted himself.

This post makes my heart so happy. ❤ It's not always about the end result, it's about the journey. That little brown horse will always hold that special journey.

Excellent. Travis, you’re a Winner! I love that little
brown horse and am so glad he joined our painting adventure!