And Now For Something Completely Different

Recently I saw a horse on MH$P that called to me. That has not happened in years. Well, Purdy Zippin Chick called to me, so I guess that hasn't happened to me in months, lol! Anyway, I saw a horse that I really loved and tried to talk myself out of wanting her. I asked Jennifer Buxton to talk me out of it. Which really meant that I wanted to buy the horse and needed an enabler. Jennifer always feels you should buy the horse.

Anyway, I decided I would make an offer on the model and the seller said she was in need of a fairy doll. Which I have never made but was definitely intrigued. So we worked out a deal for a partial trade and I made a doll that was quite a bit different from anything I have made before. 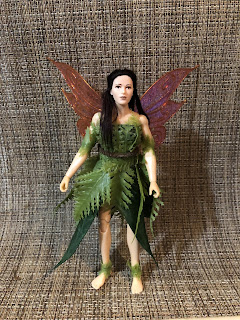 She was not exactly like the reference pic, but she had a lot of similarities. I love her iridescent wings! Wings seem to be challenging for me to put on dolls. But I managed it eventually. 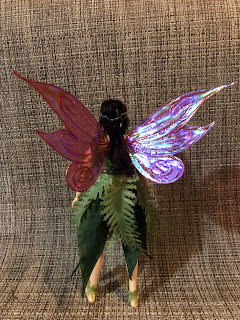 My trade partner asked for a crown and sent a reference for what she was interested in. I tried several different things and it was surprisingly challenging. This fabric-leaf crown was the second option. I really did not like how it came together. It was so flat and ugly. 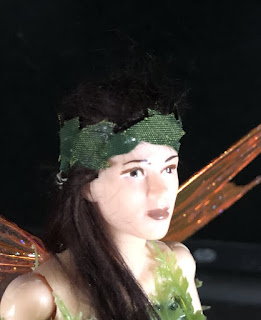 Eventually I came up with reindeer moss. That actually looked nice. At her new home she will also get some little flowers in her crown. That should look really nice. 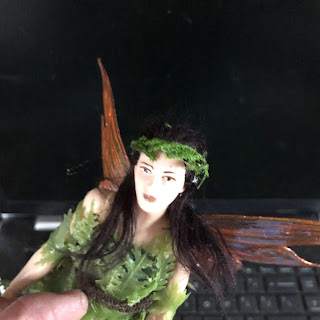 This was definitely a different doll to make. She was fun though super challenging at times. I hope the USPS doesn't hold her hostage somewhere. They have been doing that with a lot of packages these days. If all goes well my new horse will be here on Monday. I am so excited!
Posted by Field of Dolls Studio at 11:30 PM

Congratulations!! Not only for falling in love, but for trying something really new. She came out great.

The fern leaf dress is really neat. She came out great!