The title of this post has very little to do with what I am planning on writing about. It was mostly inspired by the first couple of photos. This is the view out of  "my" classroom window. In the morning, the day after our snow day, it was gloomy and sort of depressing. And so much snow. 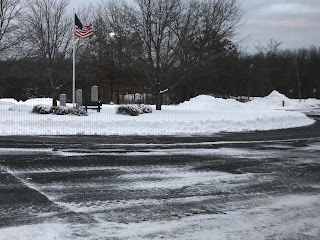 In the afternoon there was still a ton of snow but the sun was out and it was bright (so bright!) and so much nicer. The sun really just makes me feel better in general. 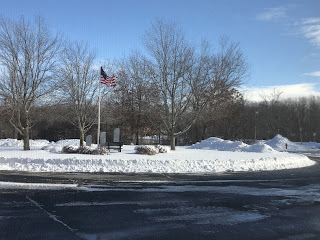 School has been kind of rough lately. The kids are struggling to stay engaged. I think they really miss all of the rules of being in school that they thought they hated. There are so many distractions at home. No one is going to make them stay off their phones. They have to be at least somewhat self-starting with their work. Everything they need to do is listed on Google Classroom, but it CAN get confusing at times. I have been wondering if we need some sort of class document where they can see everything they need to do and when it is due. They are in high school and should be able to keep track of their work, but they are also still kids and having a bit less responsibility is still appropriate. This year they really do have to have more responsibility for their work. It's hard.
In other news, trying to do the right this is super hard. I have been meaning to get Travis an ID since it popped into my head in the summer of 2019 that I really needed to do that. I meant to, forgot, meant to, forgot, meant to, covid. Damn. Quarantine was not the time to try to go and get him an ID. The registry is now open, had been for a while, so I made Travis an appointment. We went, the system had messed up and they had no record of our appointment. I was pissed, we left and I made a new appointment. Friday we went again, they have the appointment, I had the form all set and filled out, we got inside, got to the counter... and I confused the hell out of the woman. I had to make her understand that Travis could not sign the form himself. Actually, I also had to convince the cop outside that no matter that the rules for people over 18 are they go in alone, I had to go in with him. Anyway, the poor woman at the counter had no idea if I should sign his name or my name to the form. I said it's a legal document, I sign my own name. She had to ask several people. Turns out I am correct.
Anyway, we had made it all the way inside before they made us leave. I had my guardianship paperwork, I had his birth certificate, social security card, proof of address... but they wanted his proof of address to be more recent. Travis does not have bills and almost nothing comes in the mail for him. Insurance papers (which is what I had) do count, but they need to be from the last 60 days. I don't have that. So now I have to get the insurance to send me something, anything really, and make a third appointment. This is really frustrating.
But on a brighter note, because I can and will find the bright side in anything, having an appointment at the registry gets you in and out super fast. I did like that part.
When I got home I had a package from Jackie and Heather. I got my Herd Nerd T-shirt in! I don't wear white because I WILL stain it, but I will wear it and see how long it looks nice. It is super cute! 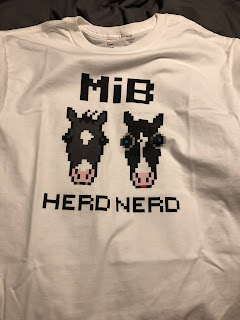 So the weather is not to my liking these days, school has a ton of challenges, and the registry is endlessly frustrating. But it's almost winter break, I have a new T-shirt and a package that was stuck in postal distribution center purgatory was finally released to me. I know more packages are sitting, all over the place, but I have hope that eventually they will move. And then so many people will get fun stuff in the mail. That makes me happy.
Posted by Field of Dolls Studio at 11:30 PM

Do I ever recognize those shirts... ! Bless your attitude. Yes, it's frustrating, and you have it the tough way. But I find some relief in the thought of all those packages patiently waiting (decontaminating themselves while they're at it). I love model horses because they exist out of time, able to wait for years with no problem, bouncing instantly back into life the moment I pay them any attention.