I have made a lot of dolls. There is no getting around that. I have some pretty cool dolls that I have kept in my collection, though not as many as I could (or should?) have considering that I make them. Over the years a lot of people have voiced  concerns about storage or the potential to break the dolls. I usually tell them the same thing; they are plastic and not usually that easy to break (though they CAN be broken sometimes).
The storage issue was solved, at least for me, years ago by Nikki Hertzog. She found these snap together containers at Target and they are perfect for doll storage. 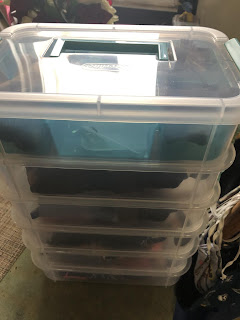 Nikki is also the one that came up with the term "doll army". I thought it was funny. These containers make it extremely easy to sort and store your dolls. No need for special wrapping of any kind. 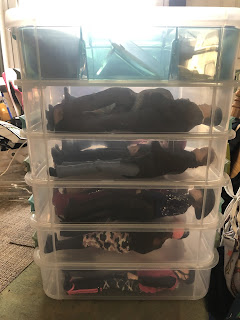 I actually ordered some replacement container this past week because I managed to break one of my containers (dropped the stack on the floor and the edge of one of them shattered). The new sets had a clear insert for the top piece. I liked it better than the opaque sage green that I originally had. Anyway, in the top part of the container I keep random small doll accessories. I have a lot of show numbers, doll stands, extra bits of clothing and a few other odds and ends. They are very easy to find and since they are stored with the dolls I never have to wonder where I put them. 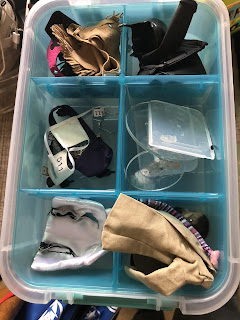 In the next box I have my male dolls. My judge, super bendy cowboy, my Christian Bale doll that is so pale he looks kind of like he could be in Twilight, and my Travis doll. Clearly, I need to make myself a new Travis doll since he has not been this small in an extremely long time. 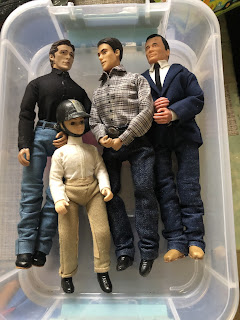 Next I have the casual dolls. Or really, some of them. I have an ancient Breyer doll that I made that almost never gets used anymore. My casual western doll which spends a lot of her time in gaming setups, and my new hoodie doll, Crystal. Little Elecktra would go in this box too, but she is out traveling the world at the moment. 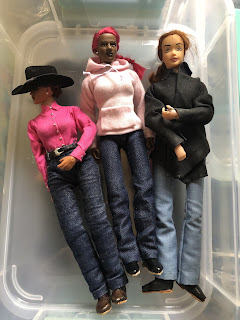 Next up is the super embarrassing English dolls box. The helmet fell off my hunt seat youth doll and I have not bothered to put it back on yet. Both of my grown up hunt seat dolls are waiting for new helmets (since I broke the old ones taking them off to get sample photos of the new helmets for KC's Galloping Gals) and one of those hunt seat dolls had a leg out of the socket. I need to see if I can fix her. 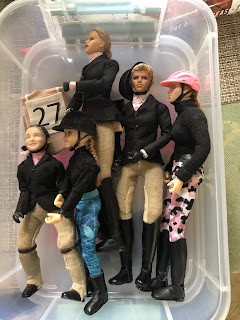 This next group is the western group. The royal blue doll has been around the longest I think. She was done on the original pale skinned Yvonne doll. The pink one was done on the later tan version of Yvonne and the newest, the turquoise doll, was done on a customized Quinn doll (I think. One of the KC's dolls anyway). I believe the showmanship doll was also an Yvonne and the youth doll was one I built to fit a saddle for Halestorm. I think she also has a broken shoulder. *sigh* I should fix that. 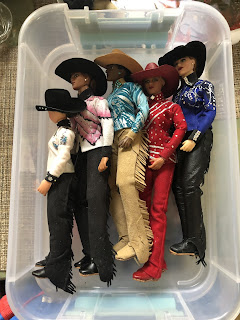 This next box of dolls is a group that is much easier for me to have because I am a doll maker. This is a variety of specialty dolls that are only good for one class for the most part. I have my vaulting rider, my jester that I made for one prompt style class, my horse ball rider and my endurance rider. Technically I can take the number pinny off the endurance rider and she is just a casual rider. But I have another casual rider so I don't necessarily have to do that. 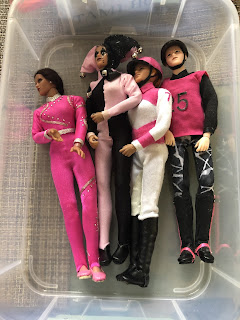 Since I was already sorting I decided that adding the new fairy wings to the box of specialty dolls would work out nicely. I still want to make a fairy princess doll and get a unicorn bridle. Goals. 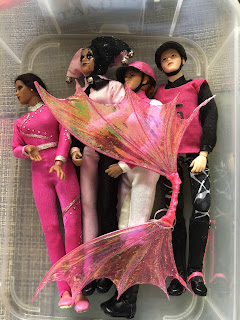 Over the years I have made myself a lot of different dolls. I have also sold many of my personal dolls when I made myself newer dolls. These days I am thinking of making myself more dolls, maybe more casual dolls so I can just play and take photos. I want my fairy princess doll and I need a new parade rider, since I sold mine years ago. Finding time to make myself a doll is as hard as finding time to do anything else just for me. It's hard. But maybe 2021 will be the year of expanding my doll collection. And fixing the broken dolls...
*please note* I have so many broken dolls in my collection because I will often use the defective dolls from the factory for my personal collection because I am able to pop a leg back in the socket if it pops out, or a should (on an Yvonne-type doll) back in. Even on dressed dolls. Youth dolls are more delicate and I am not nice to dolls...

I am neither a creator nor a collector but I am fascinated by the horses, tack and dolls in miniature. You are indeed highly talented....and scarily organized. ;).