I have held photo shows in the past, and I have held live shows. I have never before hosted an online show. I know that some people think of online shows solely in the realm of photo shows. But the new style of online show that has developed in 2020 is far from a typical photo show. We still take photos of the entries, someone still judges exactly what is in the photo and does the placings, and prizes are awarded.

One of the big differences with a lot of online shows is the ability to add a bit of live show experience to them. When the shows are hosted on Facebook you can see results as they come in (unless I am the judge and then I write down all my placings and wait and post them all in one sitting, muah ha ha!) or a lot of people will do a partial livestream of some of the results. I have always loved this part of the experience and I definitely wanted to add that.

I wanted several things for my show; a performance class list, prizes, more prizes, a livestream for some of the results, and prizes, just to name a few things. So I decided to hold a show, sort of settled on a date (and had to change dates slightly a couple of times), made a class list that was comprised of both traditional show classes and the creative scene classes that I love, and I started shopping for prizes. 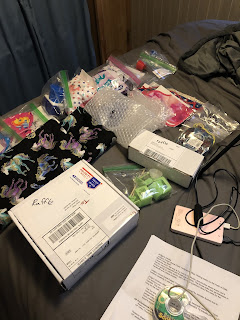 I went 100% off the deep end with prizes. And it freaked me out. I got several small monetary donations from showers (so awesome!) with their entry fees and an over-the-top generous monetary donation from Susan Hargrove. Susan saved me. I also got a bunch of donations from people that helped grow the prize pool.
Thursday night I did a bunch of math and figured out the overall OF and overall AR/CM champ and reserve performance models. Then I did some more math and figured out the overall performance champ and reserve for the specialty/scene class. This one went by shower. Then I did an overall shower champ and reserve prize. There was a lot of math on Thursday.
Friday I put names on baggies. Everyone who earned at least one prize in the show got a baggie. Then I put them in alphabetical order by first name (because alphabetizing makes sorting go SO much faster!) and I went through the placings and sorted all of the miniatures for the traditional classes and all of the mini rosettes for the specialty classes. And I messed up somewhere. But I decided it didn't matter and I didn't care. And I went to bed. 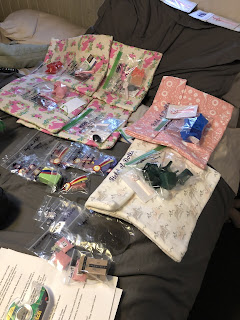 Saturday morning I woke up and realized I really needed to fix the prize bags, but I didn't want to dump everything, sort it all back out and start over. So I made a list of every shower in the show (not hard when you have lists everywhere!) and then I went through the entire show and I put down everyone's placings. My list was also in alphabetical order and it went pretty fast. Then I went to the prize bags and fixed my mistakes. I felt a lot better. I also went back through the champ and reserve champ prizes and the overall prizes. I tweaked what needed tweaking, to make sure there were really nice prize packs for the big awards, and then I made sure that the raffles were set as well. 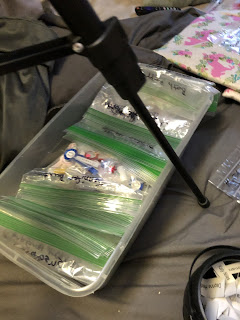 Before the livestream started I set up the camera and ring light (which is WAY better lighting, now I just need to tweak it so it doesn't totally wash out the small things I try to show), I set out the raffle prizes (I think I had 23!), I set out the champ and reserve prizes in order, got my tiny cauldron of names and I was pretty much ready to go.
When I got started I had the usual moment of panic, but since I just did a live sale a week ago, it was not overly scary for very long. Plus I had everything laid out in such an efficient way that I had no time to be nervous. I think I started by mentioning the mess up and the need to fix it (I know I mentioned it, can't remember when) and shortly after I got started and said hi to people I jumped into the raffles. When I would pull a name I would then tape it to the prize and put it aside in a bag. SUPER fast! Even with taking a bit of time to show off some of the items I think I was done with raffles in about 11 minutes. Maybe. And, as mentioned, I had a lot of them. Then I jumped into the prizes. I started with the prize for first entry and last entry, then the judge's choice entries. After that I went right down the OF list and so on. I showed all the different prizes for the bigger awards and then I was done. In about 40 minutes I had gone through everything I planned. It was fast. So I talked a bit about the Spring show and my plans for that. I think I will publish the class list sometime relatively soon. And I will start thinking about the dates. When I want it to start, finish and so on. I need a 2021 calendar (I have one in the back of my car). But definitely there will be some part of the show in April. Maybe the results portions. Not completely sure on that yet. But I have plans that are starting to come together, prizes that have already started to be ordered, and I am hoping it will be just as amazing as the first Field of Dolls Online show was. Or maybe even better.
Posted by Field of Dolls Studio at 11:30 PM

Yes, amazing! Your show was a great deal of fun.

There are calendars online. Just search for "printable calendar."