I am Not an OF collector

I am not an OF collector. I have said this over and over and I really do mean it. Over the past several years I have been really impressed with a lot of the horses that Breyer has come out with. For several years Pat Coulter and I had a standing trade. She would pick up a Breyerfest special run and the crystal horse for me (there was always at least one SR I was interested in and I collect the crystal horses) and I would trade her a doll. I also have the Welsh pony mare that was one of the Premier club models a couple of years ago. Part of acquiring these few horses was for local live shows. For the past several years most of the shows were OF only. So I chose to own some OF performance horses so I would be able to show at all. But I don't usually seek them out.
Then last year Breyerfest went virtual and I decided I wanted to "go". I bought not only a 3 day ticket but the 4 pack of the single day tickets so I could get all of those stablemates. I spent some time stalking the store when the SR models were supposed to be available. I really enjoyed trying to get some horses. Maybe it was sort of like hunting unicorns, which I do enjoy. Anyway, in the end I bought a bunch of things from Breyerfest. Some were for a friend and I kept a couple of things. But I when I had everything in hand I decided to keep only the horses I REALLY wanted. My collection is small and while I like a lot of things I sort of have to LOVE it to make space for it.
The first release of the 2021 Breyer Premier club is Fireheart. Right this second I have forgotten everything else I knew about him. I knew who sculpted him and I knew who designed his paintjob. I don't remember those things today. I also knew who the other sculptors were for the year. I don't remember that now. Anyway, I was possessed by some craziness and I joined the collector's club and the premiere club. I have no idea why. Fireheart is super cool, but he is not a performance horse. I doubt I can really make room for him in my collection. Though he is so amazing I might try. 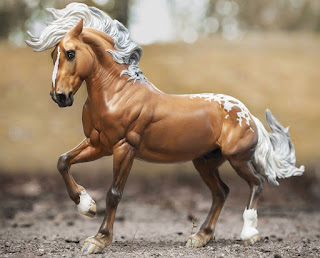 I thought that was the end of it. Then just a few days ago, right before the end of the year (and the deadline to join) I saw some of the horses for the stablemate club. Atticus is the first offering and I LOVE this little horse! Being a stablemate, he is much easier to find space for and doesn't necessarily have to be "useful". 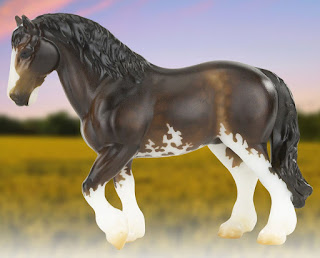 Looking around some more I found more photos of the revealed models for the stablemate club. This little appaloosa is on my favorite mold. I used to have a somewhat large conga of them. These days I have just 4, I kept only my favorites. 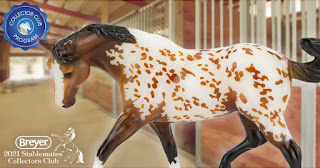 The gamblers choice Crois are also intriguing. I like some more than others, but I have seen people trading when they don't get the ones they want. That sort of thing is fun too. 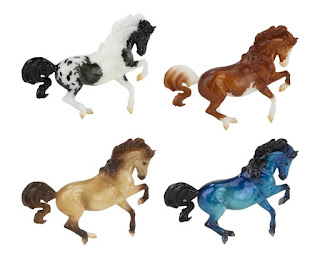 I don't love the little thoroughbred, but I don't need to keep the ones I don't love. I can either sell them or make them some excellent door prizes for my online shows. 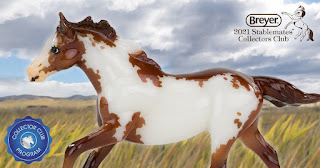 This palomino Django is another one that I really like. I am not the biggest fan of glossy horses but he does look good in glossy. And he will definitely look good next to the glossy gray from the Breyerfest set. 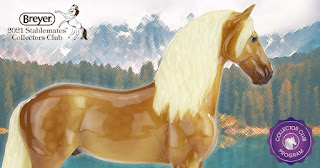 It is a mystery to me how people get all their Breyer information. I know a lot of people get emails, and now that I am in the collectors club maybe I will also get emails. Maybe they are reading the blog, I am bad at keeping up with that and I sort of feel like there is more than one? I may be wrong. Anyway, Breyer has lured me in in several ways for 2021. But I am still not an OF collector. I mean it.

Maybe customized with a calmer, performance-friendly m/t, Fireheart can be a passable cow horse who's holding the rope taut?

Breyer sends out a newsletter, or sales pitch, or advert, or digital flyer, dam' near every day and sometimes twice a day. That's how 'everybody gets their information.' This has been happening to me for more than a year. Since it's digital, you don't have to keep it. I only keep the ones that have pictures I like. I'm not sure how this started. Possibly I checked something when I joined the Collector's Club, the most basic and required Club. I'm pretty sure I'm not paying for this 'service.' Advertising is usually free for the asking.