Yesterday I woke up and thought for a bit (mostly about what day it was, I am not always sure) and decided I would upload a few photos of Mocha Latte to the Reindeer Games Photo show. I already have photos of Bootlegger and Purdy Zippin Chick entered, but with the show's extension I have time to enter some more. I was hoping to have new indoor arena photos but my arena is still in Russia. So I have not been about to get any new photos. But I have a handful of Mocha Latte performance pics that I could enter.
I realized very quickly that I really have very few performance photos of Mocha Latte. When I was doing my photos for the Mares in Black Spooktacular show I tried to get traditional performance photos that could still fit into the prompt of each class. But the class list was small and didn't even come near the full scope of even a small traditional class list. I then started to get this weird idea. Maybe I could go outside and get at least a handful more performance photos. But there is a problem with that. It's January in Massachusetts. But I figured I would give it a try anyway. Just as soon as it was above freezing. After all, I can set up my table with my (recently thawed out) Kinetic sand footing, put out my props, come inside and warm up and do tweaks on the horse and bring her outside to put her on the table. It is sunny after all.

There was of course almost immediately a hitch in the plan. Mocha fell over and popped off her ear. I don't really remember, but I don't think she has broken an ear previously. But it was easy to glue it back on and though it has a little chip missing out of it, that is not a huge crisis for a performance model. At least not at the moment. 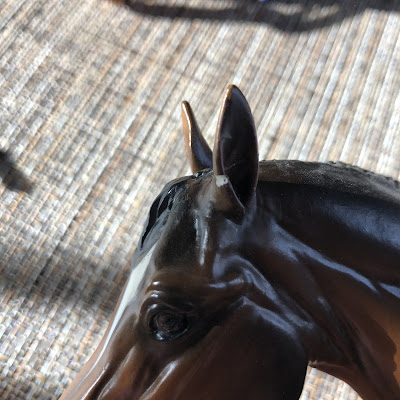 I also remembered that Mocha has had a bit of paint missing from her butt for a long time now. Years potentially. This was from sticky waxing the crupper straps down on my parade costume. I don't remember if it was sticky wax or Zots that took the paint off, but it was frustrating either way. 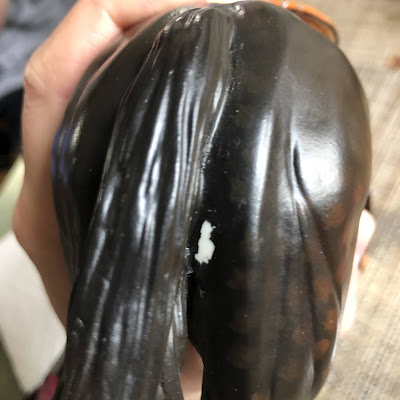 I got the ear touched up and even though you can still see the chunk that is missing from her ear she will be OK for performance. I also happen to have known many real horses who have bits missing out of their ear in one place or another. I may have to do a full repair on this ear some day, but I was really aiming at a performance day. Even though it is really cold out. For January, it's not bad. 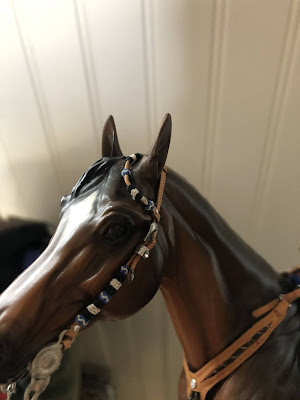 The butt boo-boo was also a fairly easy fix. In bright lights I am sure it will show, I did not do an amazing job matching colors and I didn't layer the paint. But I mostly was aiming to get rid of the stark white spot on her butt. I show her as an appaloosa, since Liesl's real Leggs is a solid colored appaloosa, and while the butt spot may or may not be realistic, I wanted it gone. 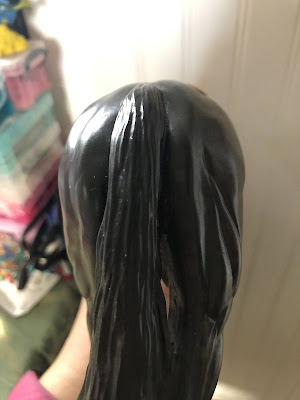 So I managed to fix a small break on Mocha and get some paint spots touched up on her and it was down to waiting to see if the temperature would rise enough to make my plan workable. Even just above freezing would work, I was convinced of it. The waiting was excruciating.
But in fun news, my Maggie's Monthly Micro(s) from December arrived! I don't think it has ever been this far into the new month for them to show. But the mail is still incredibly slow at times. I think they are super cute, though I like Ducat better than Dosh and may decide to keep only him. 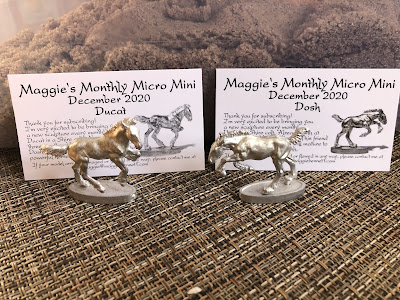 Did I mention how I goofed and mixed up 2 of my shipping labels? Thousands of packages that I have shipped and this was only the second time that I have done this. So I refunded one customer who said she preferred that to waiting, and it turns out she ended up waiting for the refund! On January 2nd I sent the refund but it needed to come out of my checking account. Clearly, that doesn't happen on a Saturday. Monday it left my checking account and took until YESTERDAY to clear! According to paypal (who I called twice about this transaction) there are 3 financial institutions involved in the transaction. And all of them seem to be incredibly slow. As for the second package (the first arrived to the wrong person but turned out really well) I had intercepted by the usps. And now it has gone back and forth to the same distribution center for several days. It leaves and goes back and leaves and goes back. I keep on hoping it will actually head back this way soon. Lucky for me that customer has been amazing about my screw up. And this will teach me to again triple check all of my labels.
Posted by Field of Dolls Studio at 11:30 PM