This weekend was Breyer Bootcamp. This is the weekend that is typically Breyerwest, but since this year it is virtual, and not west of anything, it was renamed Breyer Bootcamp. No matter what they call it I was excited to be able to enter the show. Under normal circumstances Breyerwest would be even harder for me to attend than Breyerfest. There are definitely a lot of things about our current situation that I don't like at all (I really want to hug people!) but the ability to show with people from all over the country is not one of them.
Last year I entered the virtual Breyerfest show and I went in with the idea that I am a good performance shower and I would potentially do well. Then I started looking at some of the other entries as they were loaded into classes and I was reminded that while I am a good performance shower, I am not a good photographer. The new rules of performance showing in photo shows (usually) say that realistic backgrounds are not required and will not give your photos a better chance of winning. That is great! But there is no denying that someone who is really good at photography likely has an edge. I am still trying to deduce exactly what it is that makes such fantastic, standout photos. I think it is the ability to get the perfect angle, with just the right lighting, so it turns your model horse entry into a really cool, realistic photo. I do this with dolls all the time. Little tiny tweaks to make them look more human in photos. I need to learn to translate that into my full entries in photos. I am still a good performance shower, I am still not a great performance photographer.
Anyway, last year after Breyerfest I saw a bunch of comments from people, also good performance showers, saying they "expected" to do better. Which is odd because the Breyerfest show is notoriously hard. I did not do particularly well in the Breyerfest show, the best placing was a 4th, but I could look at my entries objectively. They were not great. My "plain" backdrop was a bit distracting since it was a white cloth, over my studio backdrop and many entries show both pieces. The lighting was bad, the angles were definitely not the best... So I had goals to do better.
I went into the Bootcamp show not expecting to do amazing things. I am a good performance shower so I figured I would likely at least place, but I wasn't expecting champs or anything. Kristian Beverly judged open performance and she made us all sweat a little. Instead of marking her placings as she judged, she saved all of that until she was done (I did this when I judged the MIB Spooktacular show too).
When the performance results were in I went and checked the "my results" page of the reports section on the ponybytes website. It was such an easy way to see how my horses had done! For days I had been watching halter results come in and seeing no placings. I am not surprised. I am not a halter shower, or a great photographer, so the chances were slim to none that I would place at all in a halter section where the placings only went to 5th and some of the classes had 200 entries. I was not wrong, I did not place at all in halter.
I did place in performance. Just Because got 4th place in Western Pleasure Other Breeds, out of 14 entries. Not bad. 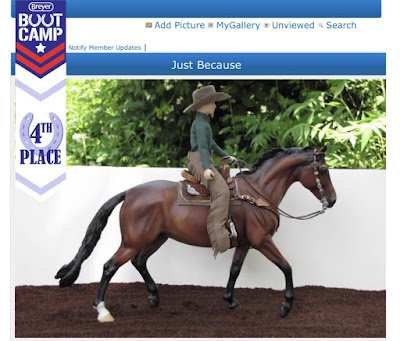 I also brought Lady Intrigue out of retirement so she could get out and show again. She got 5th in English games in a class of 22! Also pretty impressive. 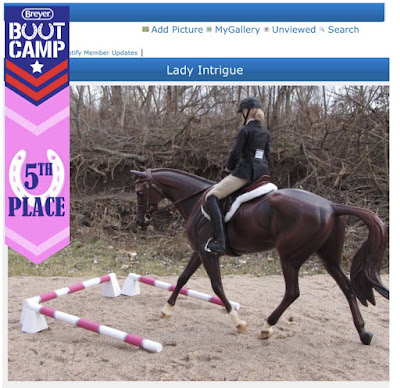 The history of Lady Intrigue, and my ability to show in dressage at all, started a long time ago at a live show in New York. Marisa Spence talked me into showing in dressage, loaned me the props, and taught me how to do it. After that day I think I showed a horse in dressage at every show I went to! For Bootcamp, Lady Intrigue got 4th in a class of 22! Even an old horse can do cool things! 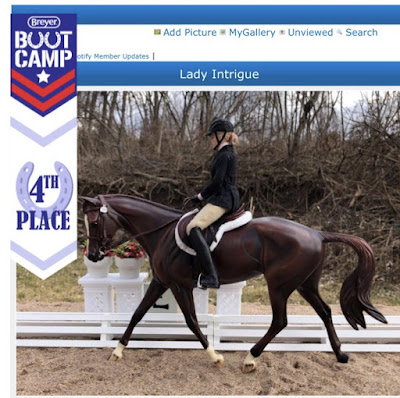 Lady Intrigue's other placing was in hunter over fences with her handy hunter entry. She got 4th in that class as well out of  34! 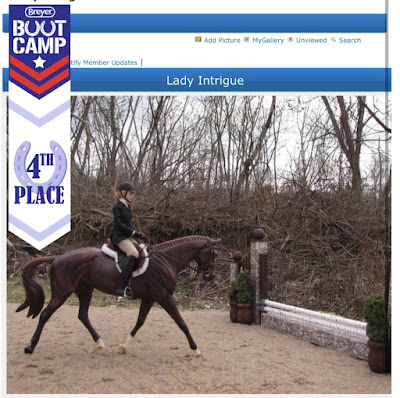 Bring the Mayhem got some placings as well. Placing 5th in Other English in a class of 26 with his versatility entry. 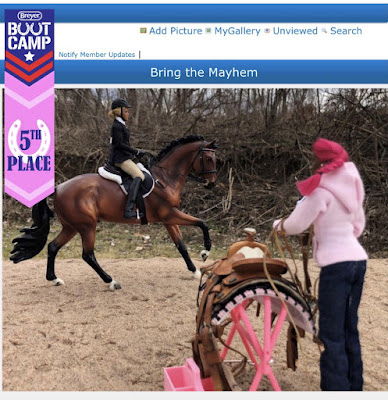 And 3rd place in Other Western, in a class of 29 with his Extreme Cowboy entry. 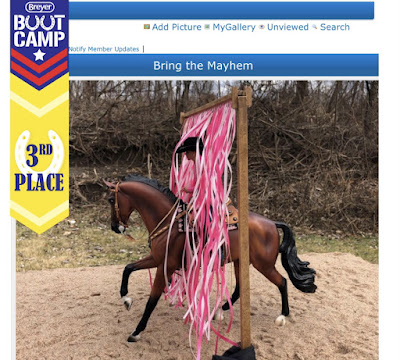 By far my best performing performance horse was Purdy Zippin Chick. She went into Huntseat Pleasure, which was a huge class of 39 entries, and got 5th place! 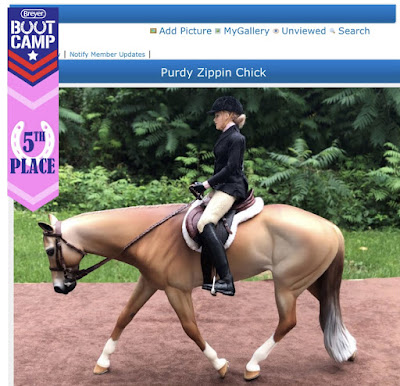 Purdy Zippin Chick got 5th in Western Trail as well, which was a class of 35. 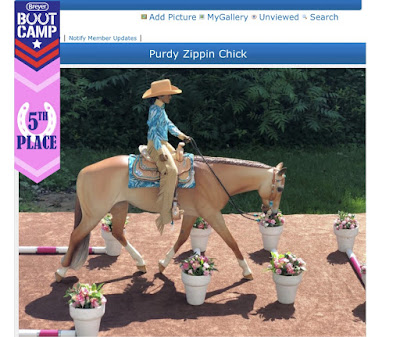 She got 4th in Western games, out of 24. I wish I could find a more interesting game than the tennis ball relay, but it works. 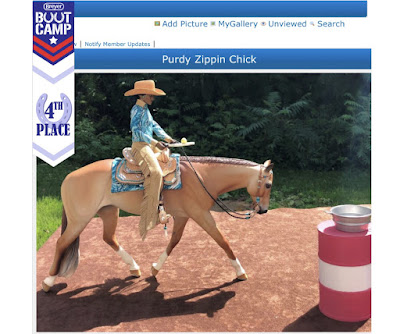 She also got 4th in Reining/Western riding in a class of 27 entries. 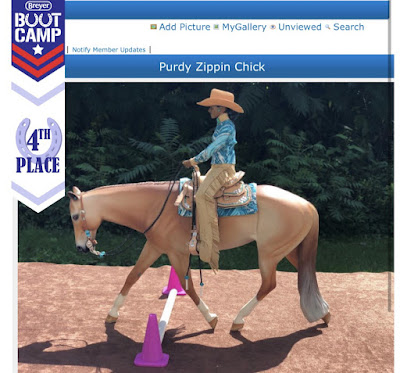 Purdy Zippin Chick won her class in Western Pleasure Stock Breeds. This was a class of 24. This was amazing and I was super thrilled! 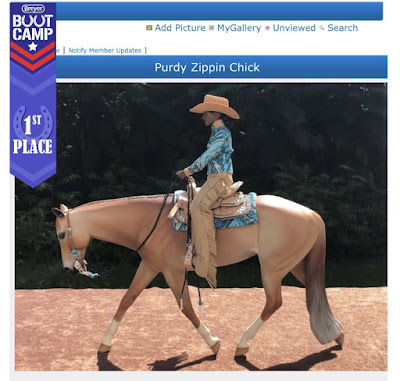 My proudest entry may have been Purdy Zippin Chicks win in the showmanship class. It was "only" a class of 20, so the smallest of the classes my horses placed in, but showmanship is one of my favorite classes and I was really excited for this win! 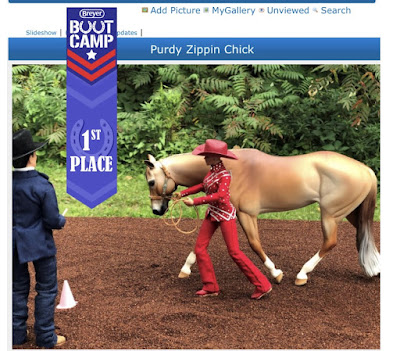 In the end I didn't get any champs or reserves, but that is OK. When you put things into perspective I actually did really well in the Bootcamp show. There were a lot of showers that didn't get a single placing at all. The classes were really large. I put Purdy Zippin Chick in 7 classes, she placed in 6 of them with a win in 2 of them. That is really fantastic! I am not at all disappointed in my results from the Breyer Bootcamp show.
The only sad part of this is my horse that did the best, Purdy Zipping Chick, cannot show in the Breyerfest show since she won a champ or reserve champ in the past. It doesn't matter that she wasn't mine then, she still can't show. So I will just have to make sure that before July, all of my photos are better. Time to get to work.

Purdy Zippin Chick looks good in almost every color, which is amazing.