I shared a photo recently of the Breyer Ideal Quarter Horse I decided to customize. Now it's time to share the start of the horrible things I am doing to him. My disclaimer, I really have no idea what I am doing. But to be clear, I am not asking for help, critique or anything else. Just sharing the madness.
I started out the process by watching a video of a horse moving it's head up and down. I wanted to see the way the shape of the neck changed. I took some screen shots of it while it was up, similar to the way the model has his head, and when it was lowered where I wanted the model's head to be. I thought about how I wanted to do this and decided I didn't want to resculpt the chest muscles if I didn't have to, so I cut along the line where the neck and the chest attach. I drew myself a sharpie line so I wouldn't screw up while I was cutting. I left a tiny bit of plastic right at the front. 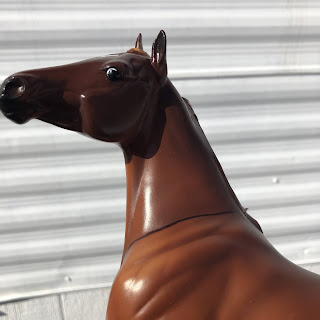 I went inside and heated up the bit of plastic with a hairdryer for several minutes. I know that a heat gun is usually the preferred tool for this but I can't find ours. Or it broke, I don't remember which. Anyway, I warmed up the neck and lowered the head...  but then the head was turned more to the side than I wanted. I didn't want that. So I did some more cutting. 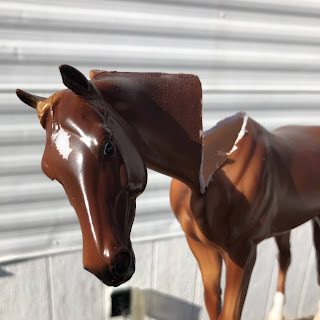 This angle was really not going to work out for me. 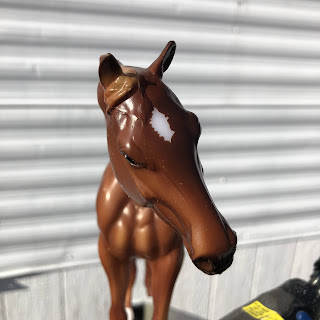 So I made the cut right behind the cheeks and the ears, but left the head attached at the top. I also gelded him while I was at it. Poor horse. 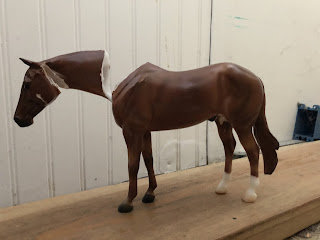 Next I stuffed a bunch of foil in his neck in such a way that I didn't have to also fill the entire body cavity with foil. I am sure there is a better way to do this, but again, I am just trying things out and don't need advice. 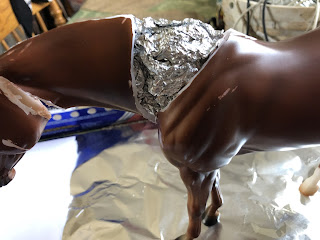 I realized quickly that I had very little epoxy on hand. But I mixed some up and slapped some over the foil and a bit on the throat to try to cover the splits I had created. It was rough and was not going super well. The white along the mane is not epoxy, but where I removed the factory mane. 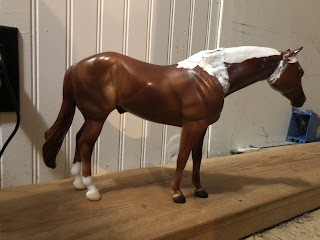 I got pictures from each side and sent them to a couple of friends (one who does customs sometimes and knows horses and to one who just knows horses) and asked if the neck was too long. It looked too long to me. I was not sure if it was just because of the two colors on the neck area or if it was too long. I also ran into an issue with the epoxy not wanting to stay where I put it. Or the neck not wanting to stay where I put it. It kept trying to go just a bit lower and made a gap between the plastic and the foil, got even longer, and was just a hot mess. 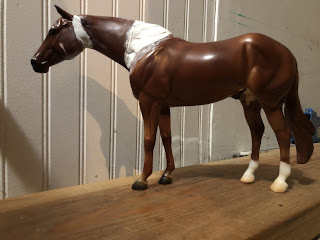 I looked at this poor horse and I said to myself, I can't do this. But that thought lasted only a few seconds. I told my brain so shut it and that I would keep going. If I did something kind of bad I could always take it apart again and redo it. So I grabbed the hairdryer again, reheated the small bit of plastic at the front of the neck, moved the neck back up a tiny bit and cooled the plastic again. Then I got some super glue and put it all over the gap between the neck plastic and epoxy and smooshed everything back together. Then after a minute or so I smoothed out the epoxy again. It was still an ugly, hot mess, but I wanted to let everything cure and then think about how I wanted to get back into it. That neck really was too long. I put him on the shelf and figured it would be days before I could work on him again, since it was supposed to rain all weekend.

In that first photo, he's looking at you in a worried way of, "What are you doing?" like what the real horses do when the whites start to show.