I really love blind bag stablemates. The fun of hunting for them, seeing if you get a chase piece, and really just seeing what you get, is a lot of fun for me. I have bought A LOT of blind bag stablemates since Breyer came out with them. Especially for someone that doesn't collect OF models. Though Breyer hooked me with their 70th anniversary shrinky stablemates. I didn't buy them when I first came out because I was only interested in a few of them. So I found a seller who had them for very reasonable prices and I bought just the few I wanted. And tried to put them out of my mind. But last week I was watching a kid take a test (not the SAT day, the next day) and I decided to check out Breyer's website. They had the cases of the 70th anniversary blind bag stablemates in stock. And I bought one. 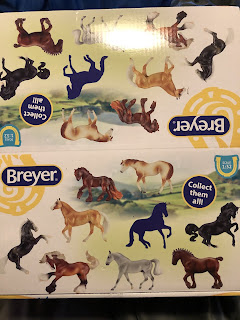 My original plan was to just use them as prizes for the Field of Dolls online show and leave them all unopened. But then when I got my shipping notification I decided I NEEDED to see what I got. I also decided I really wanted the Chase IP. I am not into decorators but I really like her for some reason. Maybe it's that she was one of my favorite horses when I was a kid. Who knows. So then I sort of had the idea that I would feel up the bags and try to figure out which ones were the IPs and then just open those. That plan lasted until I pulled into my driveway! I said I had to do all the boring grown up stuff before I could open the box. So I gathered laundry, got the mail, plugged in my Chromebook and a few other things. Then I opened the case. Starting on the front left this was what I got, and the order they were in the box. 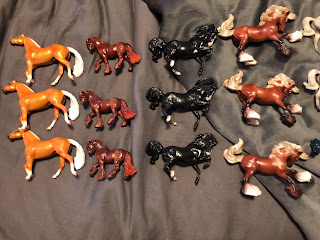 This is the right hand row, starting from the front. The chase IP was in the front of the box on the right side. I know that some people are into knowing that sort of thing. It may be common knowledge at this point, I don't know. But I got the pony I wanted. And I decided I needed to keep one of the little Fell ponies as well. Because it's adorable! I really am NOT an OF collector! 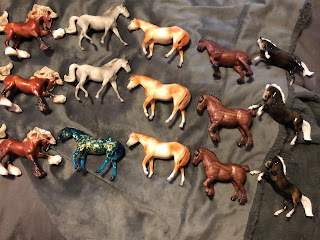 After I pulled out the 2 I wanted to keep for myself I pulled out one of each kind to put aside. My plan is to prep them and offer them for sale around NaMoPaiMo time. I know that not everyone can prep and a bunch more people would potentially join in if they could get prepped horses. So that is my plan. It may change. 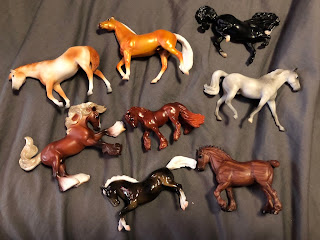 Even though they are no longer surprises, these will likely end up as prizes for the Field of Dolls Online show. There is still plenty of time to enter and upload photos. But don't wait until the last minute! 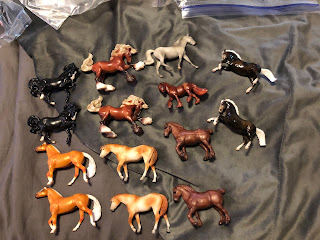 Even though I have every one of the shrinky Breyers that I want I also sort of want to buy more of them. I have no idea why. I am not looking for anything in particular. And a couple of the ones I kept I would actually prefer in a different color. Maybe I should prep the molds I like and get them painted. That might be a plan.

What's adorable is your attempt to explain the inexplicable. Congratulations on getting that gorgeous IP, and all the others.

More proof that October has been a very undisciplined month for model horse collectors.