There are times where someone asks me to make them a doll that is so far outside of the usual that I have to think about how I would construct it before I can even start to think about how much time it would take, and therefor, how much it will cost. Lucky for me I have been a doll maker for a long time so I have a fairly good idea of what I can and can't do and a reasonably good idea of how long certain things take. Sometimes though I am still wrong.

That was the case with this Winged Hussar. I knew there were going to be many layers involved in this doll. Lucky for me, Laura was incredibly easy to work with and provided an enormous amount of reference material, including a page that shows the breakdown of the different pieces in the outfit. It was fantastic! From the beginning Laura asked if she could have progress photos. Usually I say no to this since dolls go through so many ugly stages that it is often hard to "see" what they will look like until the end. They look basically like garbage for a really long time. But I sent Laura photos of the armor when it was just a bunch of pieces of craft foam with the part name written on the back of them. She told me it was a great start and she couldn't wait to see more! I figured if Laura had the vision to see that a pile of craft foam could turn into armor, she might very well have the eye to see that the garbage would turn out well in the end. 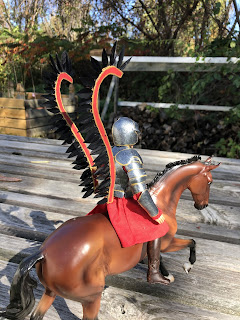 I did not have huge blocks of time to work on this doll. School, life stuff, and being exhausted caused his construction to get broken up into many several hour sessions over many weeks. I never take that long to make a doll. At every update Laura told me to take my time. And for some reason, it eased the screaming in my brain that tells me I am slacking off when I don't finish dolls quickly enough. 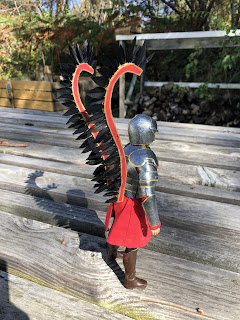 This guy was not an easy doll to make by any means. I think I had easily 15 or so hours into him before last Monday, when I had the day off from school. I worked all day on him. I think I did a few bits and pieces of other things, but mostly it was this guy. And then I ran out of feathers. So I was up to something like 24 hours of work on this doll and still had a bit to go. And I still had a bit of an issue to figure out. 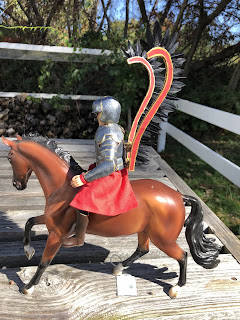 Tuesday I went to Joann's and got more feathers but I didn't have time to cut them down until Wednesday. Oh, a few people have asked me where I get my tiny feathers. I make them. If you cut the tips off full sized feathers and trim them to shape, you get some fairly reasonable miniature feathers. I finished up his wings and adjusted the magnets that hold them onto his back. They are not a secure or perfect fit. But they are removable for ease of shipping and storage. 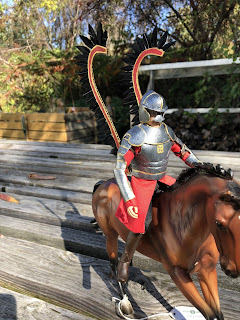 And that brings me to the shipping issue. The Hussar was done on Wednesday but I had no way to ship him safely. So I had to think on the best way to do it. I was thinking a pencil box would do the trick. But weirdly, when I went to Walmart on Saturday, there were no pencil boxes! Have those really become a beginning of the school year only item? Anyway, I found this deep storage box in the craft section. I didn't measure but it looked good to me. I figure I could put the doll in the bottom and something to support the wings and everything would be fine. But the box was not actually long enough for the doll. It was however perfect for him to sit in the bottom. I then wedged in a piece of stiff foam that came in some package. One of those things I saved with no idea what I might ever use it for. 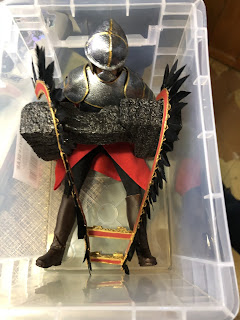 This weird configuration is actually so secure that even the USPS will have a hard time messing it up. The doll is seated in there perfect so he is braced in a couple of spots and should stay still. The foam is wedged in so tightly that it also acts like the bar on a rollercoaster. The wings are supported so there is no stress on any of the feathers and they can't flop around. I even flipped this upside down and shook it. Nothing moved except the business card I put in. I am impressed with the configuration and I feel it should help him make the journey home safely. 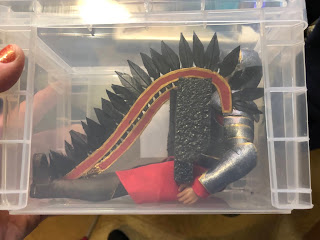 This Winged Hussar was definitely one of the more complex dolls I have made. He took a lot of thinking about and a lot of painting sessions to get his armor just right. But he sure is cool. I wish his wings were a bit more secure when they are on him, but I could not figure a way to do that that still allowed them to be removed and didn't look horrible. Maybe I need slightly larger magnets. But I think he came out nicely and he should make the trip well.
Thank you Laura for your super interesting order and your patience while I tried to figure out how to send him home to you. Happy Showing!
Posted by Field of Dolls Studio at 11:30 PM

You are amazing - I would not even know how to begin something like that. It looks awesome!