The Mares in Black Fun Class

When I first saw the class list for the Mares in Black Spooktacular Photo Show, I knew I wanted to do some sort of funny play on words having to do with Johnny Cash, The Man in Black. I went through a lot of different ideas, all of which would take a lot of work, or a lot of new things to make work. I finally came up with the idea of a Mares in Black Event. In the future, I will be totally fine is the real Mares decide to steal my idea.

First I set up a room, or two walls of a room, with several taped together sheets of white cardstock. I also checked the size of my room with my phone camera and added a bit more "wall" on one side. I don't own enough tables for what I had in mind, so I faked a couple with some small boxes and tissues for tablecloths. So far so good. 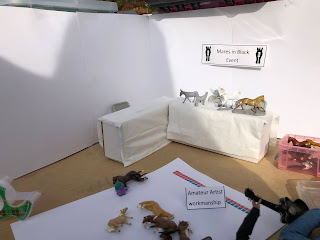 I added in a mare, who was doing a livestream during the event, set up her laptop and put out her iPad and got her headphones. There was a couple doing a prepping and painting demo, though I did not have any tools for them. I was a bit annoyed that I could not find any of my miniature painting supplies. I need to figure out where I put them before NaMoPaiMo. 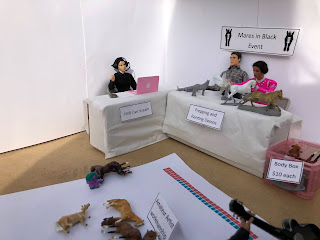 My Christian Bale doll got a Johnny Cash patch on the back of his shirt and a guitar. He was an integral part of my joke. Ethan says it's a reach. I think it's hilarious! I added someone rifling through the body box and someone else checking out the raffle table. Progress was being made. 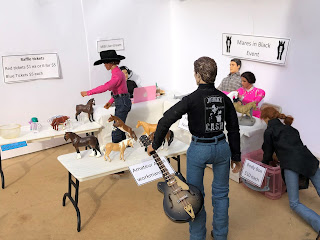 Unlike any horse show I have been to, my Mares in Black Event had a regular raffle and a 50/50 raffle (and why not?). The cups have actual miniature raffle tickets in them. It was entirely pointless to make them, but I know the detail is there. There is a stack of horse books as one of the raffle prizes and, as usual, one of the items has it's cup stuffed with tickets. 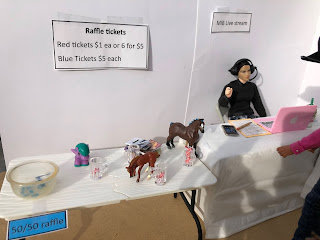 My mare had her sign moved overhead and got a Dunkin ice coffee (I KNOW it is a Starbucks that someone put a sticker on, but this was gifted to me and I love it!) and a burger. I was going to put out a bunch of candy too, but I forgot. 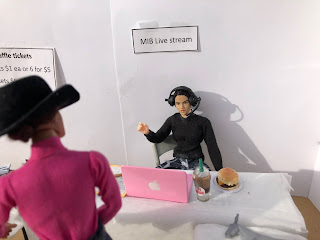 I tried to make a record of all the little details that are in this scene. Then I took about a million photos, over and over, from slightly different angles. I would stop and check and see if I was close. I ended up with several that I thought would work out well. 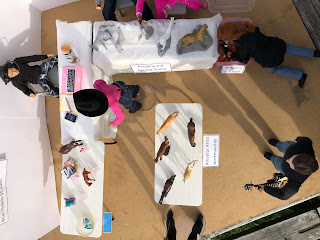 In the end, this photo has everything in it that matters. You can see the body box, even if you can't really see the person looking through it. You can see the prepping and painting demo table, The Mares in Black Event sign, the amateur artist workmanship class sign, the judge, the raffle, the mare doing the live stream and the sign above her. Almost all of the details made it into this photo. I think its funny, and hopefully does well in the show for me. This class took over an hour to set up and photograph. I had to make several things and then put them all together until they worked. And I think this works. 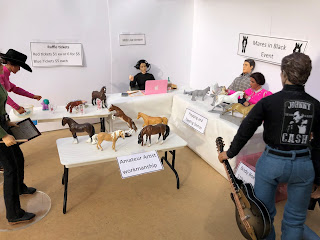 When I had my idea for the 2020 class for the Pandemic Performance Panorama my vision did not translate well. I had a hard time getting everything into the photo in a way that was cohesive and looked halfway decent. This time I think I hit the mark. I really love how this turned out. I hope it does well, or at the very least amuses Heather and Jackie.
Posted by Field of Dolls Studio at 11:30 PM

Oh that is So cute--!!! We are both thinking about blogging about our entries for this show -- you just got there before me. I swear it all feels like NMPM. I love your setup, especially the mini food. (I hope there's a bathroom somewhere after all that coffee though.) Play on!

I love this, and I hope they do steal your idea.