Continuing on with Karen Crossley's alphabet posts, today I will talk about Mocha Latte. I would have loved to pull out another OF horse, but I am pretty much out of those after my "L" post about Lady Liberty and Lady Intrigue. Though I am thinking of doing a post about some horses from my childhood. Those few horses are just about the only early hobby history I have left. But anyway, today is all about Mocha.
As far as I know I got my Loping Leggs in 2013. She was both sculpted and painted by Liesl Dalpe. Though I did not buy her directly from Liesl. My other Leggs sculpture I named Caramel Latte since Liesl and I always had Lattes when I went down to work with her. It just seemed right to give my new Leggs another Latte name. 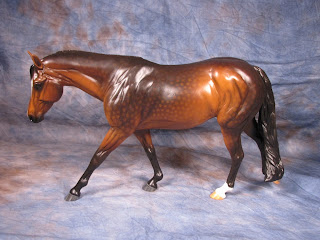 The first show I can find any photo records with Mocha Latte was the Albany Area Regional Performance show (yup, AARP, lol) in October of 2013. Mocha didn't do well at all. 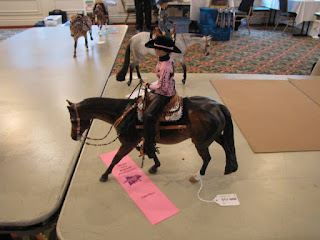 A couple of weeks later I show Mocha Latte again at NEPC and she did much better. 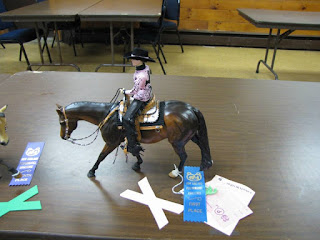 Sometime in 2016 I tried to sell Mocha Latte. I don't know exactly why, though I imagine it had to do with needing money for something. I know that at some point, maybe the same time, I sold Halestorm and her tack and doll. I found an email exchange where there was an inquiring asking for time payments. It went back and forth a little bit with the buyer before she realized she had real horse expenses anyway and me realizing that clearly I didn't want to sell Mocha. I basically needed her gone quickly or not at all. It turned out to be not at all.
In November of 2016 I showed Mocha Latte at TRXC and she did quite well in a variety of classes. I also discovered she looks really excellent in hot pink. 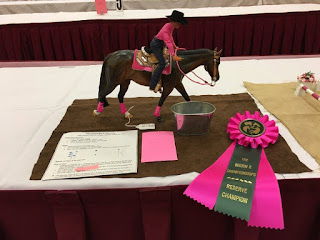 I have been showing Mocha Latte fairly consistently since I decided I would miss her too much if I sold her. November of 2019 I showed her at TRXC and she did quite well in several classes, including earning champion in a large western trail class. That was the last live show I got to attend. She does well in both English and Western classes and is a lot of fun to show. I am glad she is part of my collection and I didn't follow through with selling her. 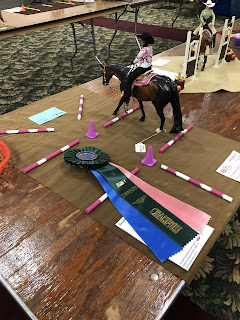 Since we are not having live shows for the foreseeable future I have been taking performance photos so I can do some online shows. I have not done show photos in years. Partially because I don't have a great place to take photos. I don't have any large backdrops that work for indoor (or outdoor) photos and have never had luck with poster backdrops. The new rules that most shows have adopted that say a realistic background is not required have opened up online showing to me. Though occasionally I can get a cool pic that looks realistic all around. This photo has not been manipulated in any way. I took this with the portrait setting on my iPhone. It's pretty cool what my phone camera can do. 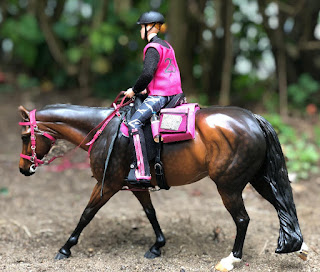 This is another that I took in portrait mode on my phone. I don't ever mean for this to be a show photo, you can't really tell if the horse is in the correct spot or not, and you can't really see if the tack is correct, but I thought it was cool. Sometimes you just have to take a photo because it's fun. 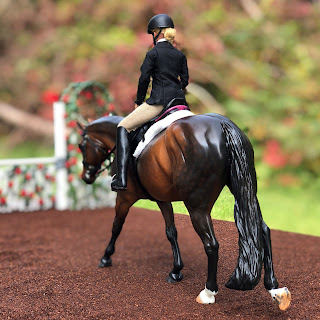 So that is my story about Mocha Latte. She is my second Leggs resin and my second Latte. Whenever I get my Little Leggs painted she will also have to get a Latte name. Not sure what just yet. But one thing I know for sure, Mocha Latte is here to stay, and I am sorry I ever considered selling her.
Posted by Field of Dolls Studio at 11:30 PM